Jackie Gleason and the Pickled Alien by Kenny Young

By John Greenewald on May 25, 2015 1 Comment
Jackie Gleason & Richard Nixon 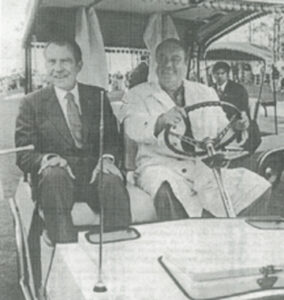 The following was researched, and published, by the late UFO Researchers and Investigator Kenny Young. It is archived here for reference.

Note: The following reports were filed after several years of trying to locate the subject, Beverly Gleason McKittrick, ex-wife of the famous comedian Jackie Gleason. Her comments would help clarify a story that has become a UFOlogical legend: The alleged Richard Nixon / Jackie Gleason encounter with pickled aliens. In July of 2003, she was located at her home in Easton, Maryland, and her remarks were most interesting. – KY

This morning I spoke by telephone with Beverly Gleason McKittrick, an ex-wife of the late comedian Jackie Gleason. I explained to her that I was interested in the progress of her book and if she could talk about Jackie Gleason’s claim of seeing alien bodies at Homestead Air Force Base in Florida.

“Esquire Magazine interviewed me after our separation,” she said, “and I talked about how Jackie told me about seeing dead aliens in Florida. I think it was sometime in ’74 when this happened. When I said that it was because he told me.”

“After the interview was published,Jackie was upset about the story being public. He called and said he didn’t appreciate me giving the interview, and that’s when I started to wonder if the story was ‘iffy.’

“The reason I became ‘iffy’ about it is because I wondered if it was really true, I mean… I believed it the whole time. I bought the story hook, line and sinker. But if it was true,then why did he get so upset about it?”

Beverly went on to explain how Jackie came to tell her of his experience.

“Jackie had been out very late one night I did not know who he was with,” She said. “He told me where he was that same evening, he said he had been in South
Florida with President Nixon to see some dead aliens there and I believed him, he was very convincing.

“He and Nixon were in contact quite a bit and I’m not sure how that was arranged, but it seems that their meetings were set up by an associate of Nixon’s. After he got back, he was very pleased he had an opportunity to see the dead little men in cases, he explained to me what they looked like and he was still talking about it the next day.”

Beverly explained that during her interview with Esquire Magazine, she made the statement about Gleason’s claim tosee dead aliens and afterward things between her and Jackie turned sour.

“We were on the verge of divorce, but everything was okay until it came out in Esquire,” she said.

She informed that Gleason never did deny the story

Regarding her announced intention to write a book, Beverly again said that she
abandoned the project due in large part to Gleason’s objection to her comments about him seeing the aliens.

“I just made that one statement about the UFOs and it appeared in Esquire and I guess a few other places and he didn’t like that and I thought, I just can’t go through with this. Let him live his life. So I never wrote the book.”

I thanked Beverly for talking with me and asked if it would be okay for me to call her back later if I had more questions, she agreed. That concluded our conversation.

Special thanks to Donnie Blessing, Grant Cameron and David Rudiak for their help in providing contact information for Beverly Gleason McKittrick.

This afternoon I placed a second call to Beverly Gleason at her home in Easton, Maryland. We spoke for about 15-minutes and I asked if she could recall, for certain, if Esquire Magazine was the first to print her story about Richard Nixon showing comedian Jackie Gleason, her late husband, alien bodies after a golf game while at Homestead Air Force Base in Florida.

Beverly said that she is certain that it was Esquire Magazine that first printed the story, and went on to describe how the article was the front page cover story of Esquire, carrying a picture of Jackie and some text regarding UFOs. She also said that the reporter who did the story still works there, and she could only recall his first name perhaps being “Ben.”

She said that in the years after the Esquire report, other publications picked up the story – some of them she thought, directly from Esquire.

Going back to the Gleason/Nixon meetings for golf in Florida, she couldn’t remember any specific date they met but said that her relationship with Jackie Gleason was good during that time frame. She said that she had even met with President Nixon herself, meeting him near a pool and having a drink with him.

She said that later, at the time of the Esquire article, her relationship with Jackie was not good.

“I’ll be honest with you, about the time the article appeared Jack and I were breaking up,” she said. “And when he saw the Esquire article that just finished everything.”

I asked her about the reports she had planned to write a book and whether or not she ever prepared a manuscript.She said that she did not have any written manuscript at any time and nothing otherwise prepared. There is nothing she had ever prepared in writing,she said, to document this first-hand.

“At the time Jack came home after his meeting with The President, he was so giddy and excited about seeing these little men,” she said, “but in the years afterward I began to ask myself if any of this could really be true or if he was just telling me that…perhaps having been ‘out’ with someone?”

I asked her if she could recall any of his words, a more complete description of the ‘little men’ or any information such as where they came from or crashed, and Beverly laughed and reminded me of how many years ago this was. She then answered by saying: “you would be best off to find that Esquire article, that probably contains my closest recollection of anything he said.”

I told Beverly that in addition to doing research, I also was involved in writing and producing television documentaries.I asked her if she would feel comfortable going ‘on camera’ with this story and said that it would be tremendous to preserve her comments and experience on videotape. She said that she was not interested in going on television and thought the story concerning the ‘little men’ should be authenticated first. I said that the only real ‘authentication’ would come if the government announced having the bodies and she said “I guess you’re right, but I guess I just don’t want to go on camera with this.”

I thanked her for talking with me and she again suggested I find the Esquire magazine article.