White, somewhat tacky, gelatinous-appearing “bread-like” materials were found underneath flattened crop (wheat) in the centers of 6 of the 7 circles in a crop formation. The formation, found August 2, 1997 by Robert Boerman, was adjacent to a well-known “healing center” known as the “Michael Farmhouse” in Brummen, The Netherlands. Following are photographs of the crop formation and one of the gel materials as found. 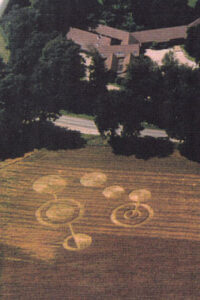 Above is the crop formation where the gel was found. “Michael Farmhouse” buildings are also visible. Prehistoric burial mounds, destroyed when nearby roads were built, existed in the area until the 1920s.

Two samples of gelatinous materials are identified as a styrene/butyl acrylate copolymer. It has the following structure:

This is a well-known polymer which is commercially manufactured. Mineral materials (dirt) are present in KS-04-27 at very low levels, while KS-04032 contains significant amounts. Some common uses for this copolymer are in many types of coatings, e.g. anticorrosion coatings, timber and concrete coatings, and wall coatings. The physical appearance of the polymer is unusual. It is speculated that it was exposed to perhaps heat or some energy force to cause the melt appearance.