Home » Space Anomalies » UFOs in Space » ‘I saw an alien hitch a ride on the Space Shuttle,’ says NASA veteran

‘I saw an alien hitch a ride on the Space Shuttle,’ says NASA veteran 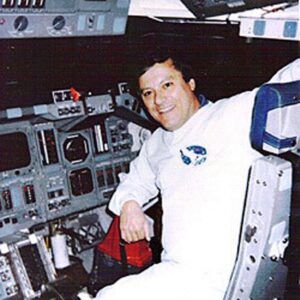 by Rob Waugh for Metro.co.uk

A veteran NASA employee says he saw a nine-foot-tall alien hitch a ride on the space shuttle – and watched the creature have a quiet chat with astronauts when it thought  no one was looking.

UFO sites have seized on this as CONCLUSIVE EVIDENCE that there is a vast, global conspiracy where our leaders are in league with aliens.

Others are less sure.

He claims to have worked at NASA for 35 years, including work on the Apollo missions – and in his favour, no one has stepped forward to say he isn’t.

There’s also a picture of him actually ON the Space Shuttle, which is conclusive enough for the UFO sites.

McClelland says he was monitoring a Space Shuttle mission from Kennedy Space Centre when he saw something he wasn’t meant to – namely a gangly, slender alien chatting away with two astronauts in the Space Shuttle’s payload bay.

He also saw an alien ship ‘parked’ nearby.

Second disclaimer: UFO fans believe, of course, that this first disclaimer is disinformation, spread by the Men in Black.

McLelland says, ‘I know an ET and Alien craft when I see them.

‘Aliens are here on Earth, they walk among us. They may have been implanted into our various Earth governments.

His website, entitled Stargate Chronicles, is, shall we say, an interesting read.

Note from The Black Vault: In addition to the above article, Astronaut Clark C. McClelland had issued a statement about what he saw on his website, back in 2008. I wanted to add it here for reference.

In SUPPORT of MY FRIEND, Courageous, US NASA ASTRONAUT, Edgar Mitchell, Apollo 14.

I, Clark C. McClelland, former ScO, Space Shuttle Fleet, personally observed an 8 to 9 foot tall ET on my 27 inch video monitors while on duty in the Kennedy Space Center, Launch Control Center (LCC). The ET was standing upright in the Space Shuttle Payload Bay having a discussion with TWO tethered US NASA Astronauts. I also observed on my monitors, the spacecraft of the ET as it was in a stabilized, safe orbit to the rear of the Space Shuttle main engine pods. I observed this incident for about one minute and seven seconds. Plenty of time to memorize all that I was observing. IT WAS AN ET and Alien Star Ship!

To all who have faith in ME, I present you with this artists concept (See on top) of what I saw many years ago at KSC. It was a tall creature, about 8 to 9 feet tall. It had a humanoid body shape with two arms, two hands, two legs, two feet, a slim torso and a normal size head for its size. The color of its skin I could not determine. It appeared to have two what appeared to be eyes, but it was not detailed enough for any other comments.

How did it communicate? I have no idea. It did move its arms a lot. Almost like giving instructions! I heard no voice communications. The helmet was not as large as our two NASA Astronauts, and had a viewport to look forward. It had a small, perhaps a communication device, attached only to the right side of the helmet!

I saw no oxygen tank(s). It had a wide belt like wrapping around it.. It did not appear to be tethered as the two Astronauts were to the sides of the shuttle structure. I observed nothing that appeared to be a weapon. The time of this amazing scene was one minute and seven seconds, I timed it on my Astronaut chronograph watch.

A friend of mine later contacted me and said that this person had also observed an 8 to 9 foot tall ET INSIDE the SPACE SHUTTLE CREW COMPARTMENT! Yes, inside OUR Shuttle! BOTH missions were DoD (Pentagon) TOP SECRET (TS) encounters!

With my verifiable background, there is no Federal Government Agency that can say I am crazy.