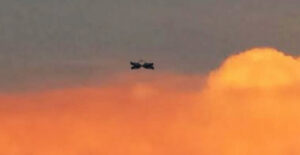 The following was submitted to MUFON (and special thanks to UFO Casebook for editing):

I was walking my dog and was walking easy. She started acting very scared and tried to run for home. I looked around to see if something spooked her.

I looked up and saw this object drop out of the sky and stopped dead, it didn’t slow down. It just stopped and hovered about 500 feet away from me, and about 700 feet from me, and hovering about 3 buildings from my home.

I didn’t hear anything, smell anything, I did however feel a buzz-like sensation. I honestly thought something was going to happen to me, my adrenaline was pumping hard and it took everything in me not to run and stand as still as possible.

This is not me, I am a very curious person and want to figure out any mystery that I come across. It has served me well many of times, but has also been a disservice at times. I thought I was going to get abducted, hurt or God forbid; killed.

After a few (seemingly) seconds I remembered I had my phone on me and went to grab it. However, I noticed the phone (Moto G) was very, very slow (also not typical, I pride myself on keeping my computers and such in optimal running condition), after a few seconds I got the camera app running and snapped a few pictures; after the 4th or 5th, the phone shut off and over heated.

The vessel then out of nowhere, shot west towards the Gulf of Mexico. I didn’t see it after then. The dog calmed down and looked at me like if she was saying (can we go the hell home now?), and we run home.

I get home and my wife asks me where have I been. She says I was gone for almost a half an hour. I don’t think I was abducted, I think I got so lost in the moment that I lost track of time.

I tried to get my phone back on, but she wouldn’t boot. I opened the back up and the battery was hot as hell. The battery shorted out. (No I don’t have it, lithium ion batteries can burn skin if they rupture). I got a new battery and it booted up and saw the pictures.

I showed my wife and son and they both believe it was a unmanned drone. I don’t believe it is a drone. I am a huge fan of aircraft and know every make, model, shape and size of all human made craft. This was not in any category of craft that I know of.

And on top of that, all human craft make noise because of the motors.