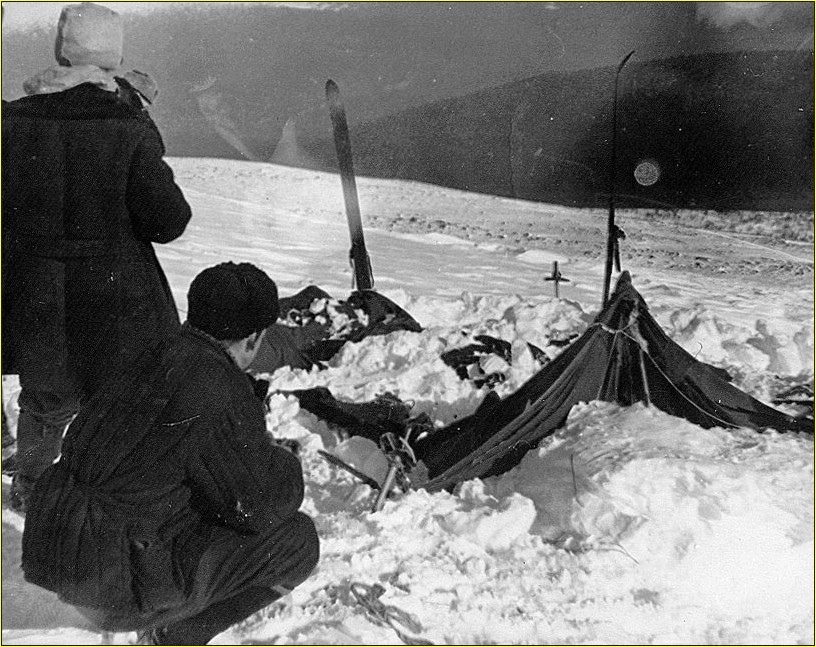 This is an incident that happened on Mt. Otorten in Russia’s Ural Mountains.  Many can take this case to the UFO/Alien Encounter vault or perhaps maybe the alma?  Who knows, but here is what went down for these 9 very experienced skiers/hikers that unfortunately never made it home and had horrific deaths.  They started their hike and on their 4th night out on the expedition they were forced due to weather to camp on a mountain known as the Mountain of the Dead.  I know what you are thinking right now…  Who the hell would honestly want to stay the night on a mountain named after the dead by locals….  Not this guy….

Ten days went by after that night.  They never showed up to their destination.  This involved the military hunting them down.  First question I would ask myself is if people do believe in phenomenon like this why would assume that they are benevolent beings.  There is no doubt in my own mind that these beings that did this are absolutely demonic or malevolent in nature.  An absolute distaste for human life.  This is some wicked stuff we are dealing with here.  You will soon find.

The hikers camp is found and the tent is utterly destroyed from the inside out.  But that isn’t the only thing thats going to be broken from the inside out on that night.  Something scared these poor hikers bad enough to flee the tent without boots.  Investigators at the scene say the tent was cut with knives to get out quickly.  So to me that is odd.  Something scared these experienced hikers enough to cut through this tent and run out into a freezing cold night with nothing but socks and some clothes on.  No animal or human tracks were scene anywhere except left by these poor souls.  Why is it in 2 months of these bodies sitting out in negative 20-40 degrees Fahrenheit do they look more decayed and ruined than a mammoth that has been frozen for thousands of years?

The hikers were found right outside a wood line and they look mutilated.  Look at those pictures and tell me something isnt right.  “Come, Watson, come! The game is afoot. Not a word! Into your clothes and come!”  Lets look at the facts.

1.) Some had radiation poisoning?!

6.) Crushed bones causing them to fragment into ones heart!?! wait wait whaat?!!  no open skin wound on this one making it so the bones almost burst from the inside?!?!

Officially this went down as a hypothermia case…..  The poop people will believe. The chief investigator absolutely refused to sign off on hypothermia being the cause of death on the report and instead resigned his position.  One of the investigators was even taken out of the case because he was too thorough.

In the end all of deceased were buried in zinc coffins.  I am willing to bet they were actually lead to help with the radiation.  The case had been changed from death from exposure to a murder case and remains there to this day.

On the night of the hikers deaths locals remember seeing UFO’s that were emitting a bright orange light flying around.

The area was barred off later for 3 years not allowing skiers and hikers to go near there.

These are the hikers names.  There was a tenth one, but he left the first day in due to being ill.

There is much much more to this case and I encourage anybody to look it up and come up with their own opinions.  Thanks for reading!