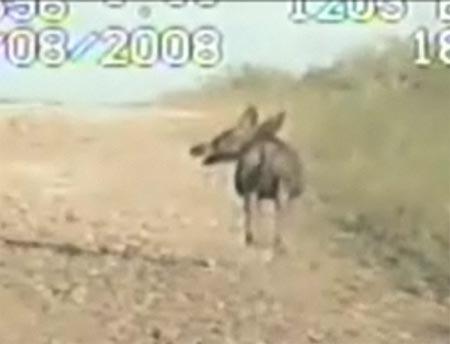 (NECN/KSAT) – The legend of the Cuero Chupacabra is getting new life. A pair of Dewitt County (Texas) sheriff’s deputies caught a rare glimpse of what some believe to be the mythical creature. And, they recorded the entire encounter on their patrol car video camera.

“I’ve been patrolling these back roads for a long time and I never run across anything like this.” Last Friday, Cpl. Brandon Reidel was training a new deputy when they came across an unusual sight. “We were out checking fence lines and we came around the corner and we saw this running down the road.” Thinking they’d spotted the elusive Cuero Chupacabra, Reidel turned on his dash cam.

“You need to record something like this b/c it’s not everyday you find something that looks like this running around out in the middle of the county.” The short-legged, hairless critter with a long snout looks like a coyote, but Reidle isn’t convinced.

“It just doesn’t look like your average coyote or dog or anything.” KSAT reporter Tim Gerber has the story.

Note from The Black Vault: The original NECN video story was removed, however, I did find another story by FOX done on the same video. That is above.