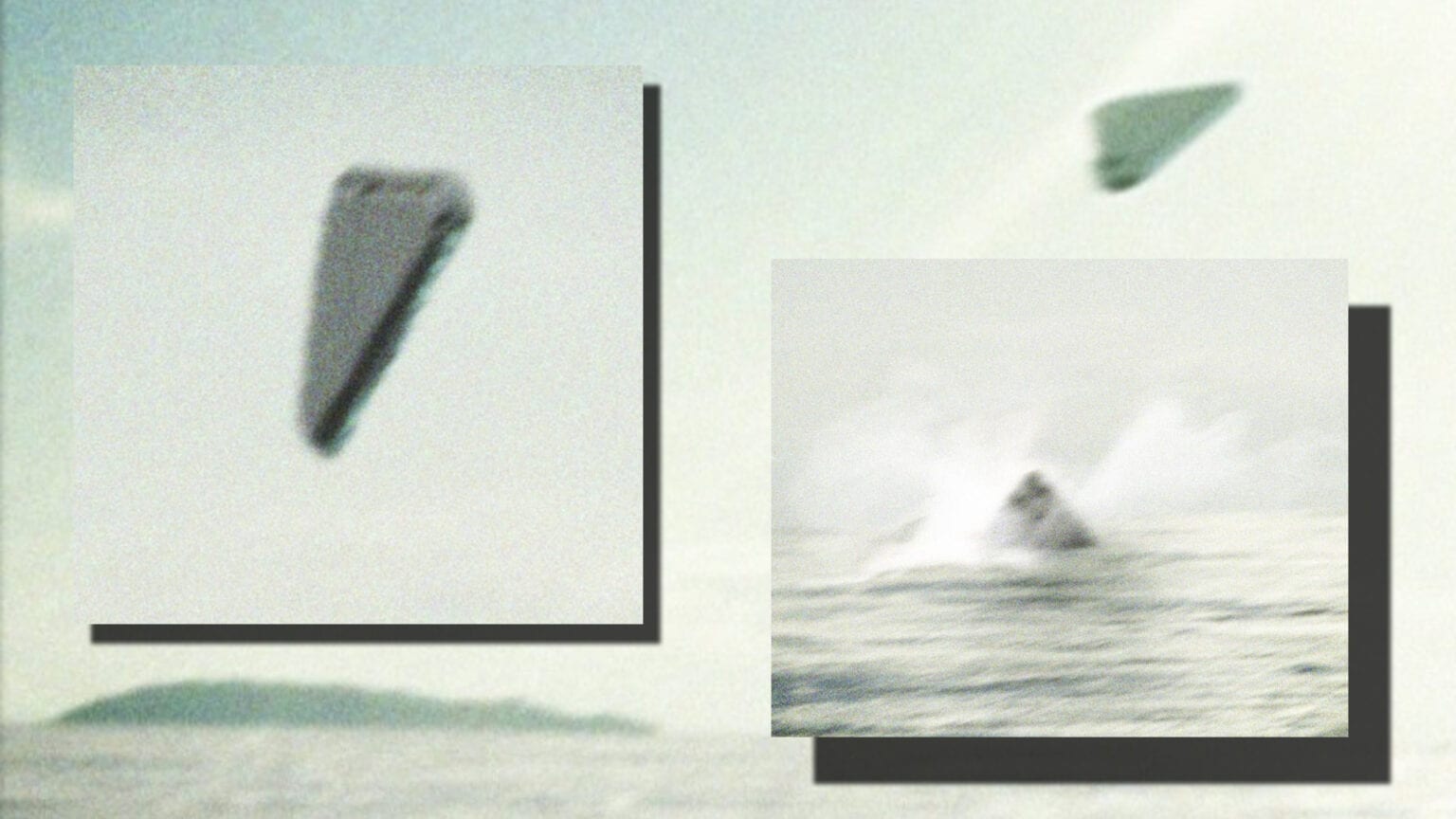 This case comes from the social media network Reddit. Numerous photographs of a black triangle splashing in the water were posted, then apparently quickly deleted. Savvy users of the thread /u/ufos did download and save them to later repost them for analysis later on.

The Black Vault has archived them below. There have been many within hours of these being posted, who have submitted legitimate observations that point to these being a hoax. That analysis, with credit to all those who did it, is also below for consideration. 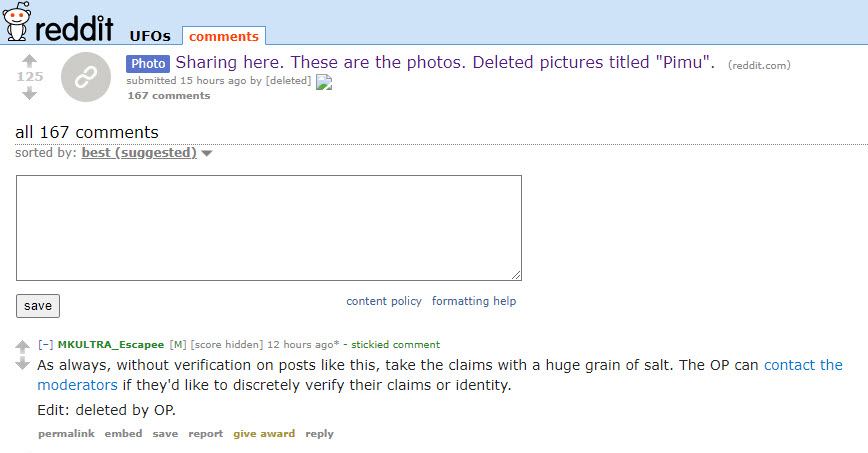 It appears the island in the background is Catalina, and “Pimu” as noted on the original post is the name given to the island by the native American tribe Tongva.

Within hours, numerous people posted analysis of different forms throughout Reddit, Twitter, and beyond. Some are archived here (with more added as they are seen) with credit to those who originally did them.

My aim here is to have a central spot of some of the most critical analyses found.

One of the most popular Reddit comment analysis posts was from /u/IsaKissTheRain. Anchor links have been preserved, as the poster described his technique:

Ok, here is what I found.

I passed these images through some analysis, both with Photoshop features and with the tool ‘Forensically’.

In photoshop, the edge detection of the UFO seemed consistent with other parts of the image. A colour DNA analysis—which is basically turning up the saturation—showed that the UFO has the same “colour DNA” as the surrounding sky and water; meaning that I do not think it is an object copied into another image. It still could be, of course, but they will have had to take special precautions to copy in an object that had the same light bounce as the original image, or would have had to manipulate it further to match. It is likely that this isn’t another image that has been pasted in.

In forensically, the clone detection tool did not detect any cloned areas. I got a few false positives on the edges of the individual slides, but that’s because the tool is just detecting the straight arrangement of pixels on the slide borders. However, as another user pointed out, this could be a border overlay. it could also be a drop shadow applied to the UI of the program the pictures are being viewed on. Nothing jumped out to me in the error level analysis, either.

However, in Slide image 2, with the magnifier set to histogram Equalization, there is an unusual halo of white pixels around the UFO. At first, I thought it was a clear indication of manipulation, but… I’m not sure. I don’t know what to make of it. In my research, I’ve come across accounts of UFOs having sort of a luminescence or halo around them. This is the only image I can find such an artefact in, however, and the light is relatively bright behind it. It could, therefore, be a halo of light bounce off the object.

So, from what I can tell, the images do not look manipulated. I should point out that other users have commented that the grain of the images seems to be a film grain filter placed over it….but the clone tool did not detect any obvious patterns in that grain. It could still be the case that it is a filter, of course.

My conclusion is thus: Either this is excellent CG/Photoshop, or it’s an image of an actual object. That doesn’t mean that we are looking at an alien craft, but I guess it doesn’t mean we aren’t.

The following is from Reddit user /u/RollerDerby88. Per their original post critiquing the photographs, they feel they found the original “splash” photo used by the hoaxer. They posted the following montage: 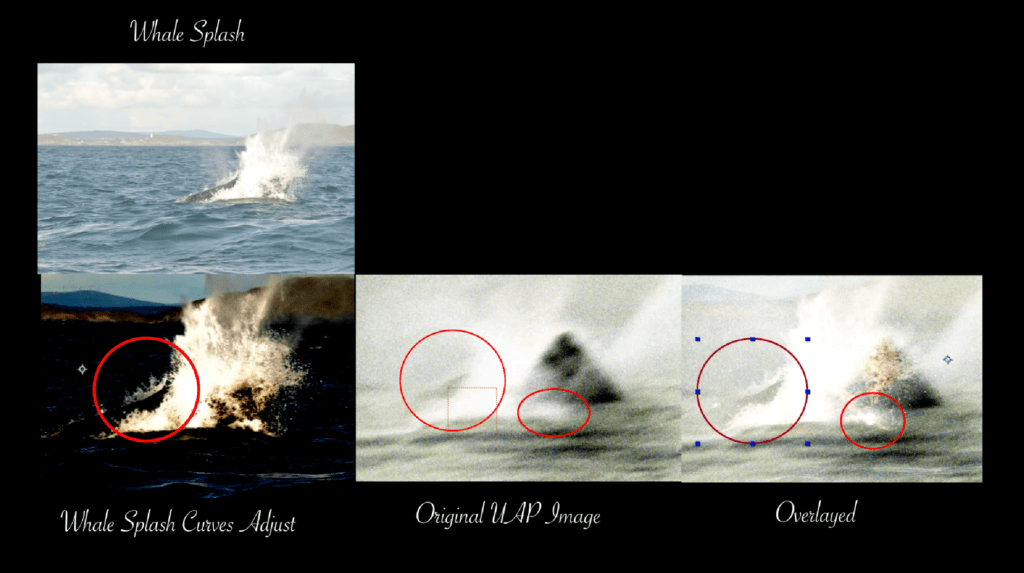 I searched “whale splash ocean”. I may or may not have spelled the word occean wrong and scrolled a lot farther than I care to admit.

I do VFX as a hobby so it is just a line of thinking I am accustomed to. If they are grabbing assets for comping, they probably won’t go too deep when searching. Maybe using a stock background? Paste the images onto a transparent sticky app. Search for catalina horizon, island horizon, ocean horizon, sun horizon cloud, ocean hdri, ocean hdri 8k, etc. (specifically looking for the cloud, island, and the sun) > 1 hour later > can’t find a match. Did they do a water sim for the splash? Probably not because that’s a pain in the ass. Equivalent reference pic at approximate scale? Maybe a whale jump. Whale jump > whale surfacing> whale splash > see something that looks familiar… boom, match.

Moderator “Trailblazer” on Reddit, based on the above, posted the following:

Looks fairly indisputable to me that this image was used to create the fake. Boosting the contrast of the “UAP” photo, you can also see a trace of the land skyline behind the splash (red circle).

I suspect the splash to the right has also been created by rotating the splash from the same photo, but it’s not conclusive. 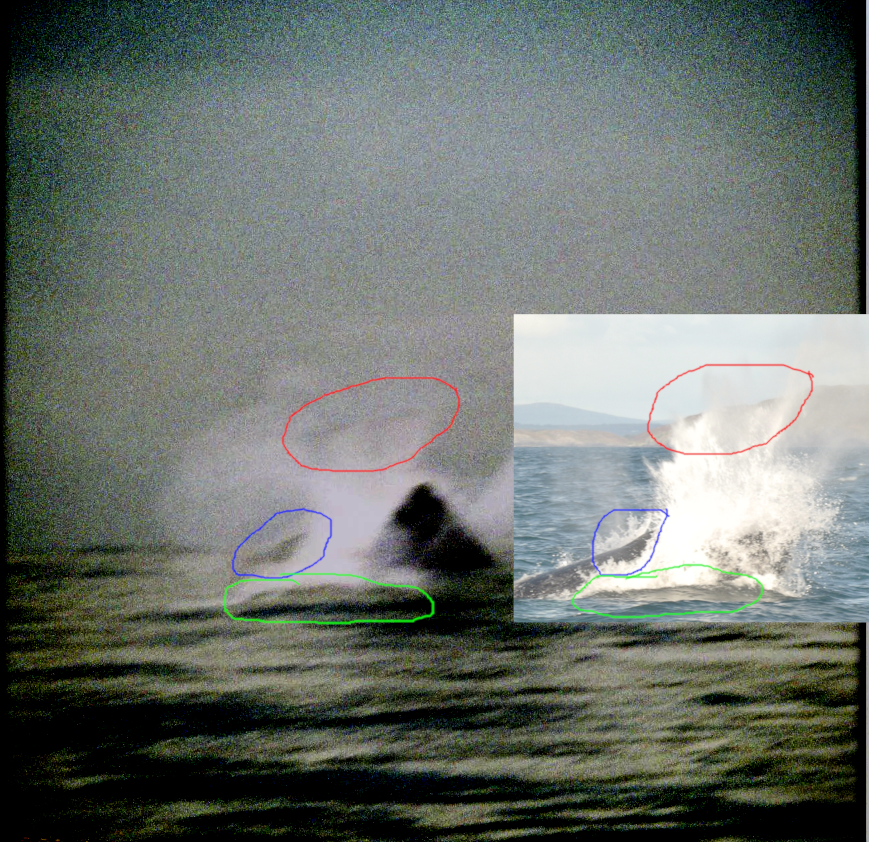 …there seems to be match between the waves in the second island shot and the 1st zoomed in shot.

Mick West, noted skeptic and debunker, immediately posted the photographs to his site MetaBunk. His initial analysis/finding was:

What looks fake to me is the grain. It looks like the photoshop “Add Noise” filter, which adds noise at pixel resolution, rather than some actual film grain. So you get lots of random short lines.

Here, I’ve recreated it on the left, with the “photo” on the right.

By comparison, here’s a crop of photo I scanned in at 600dpi 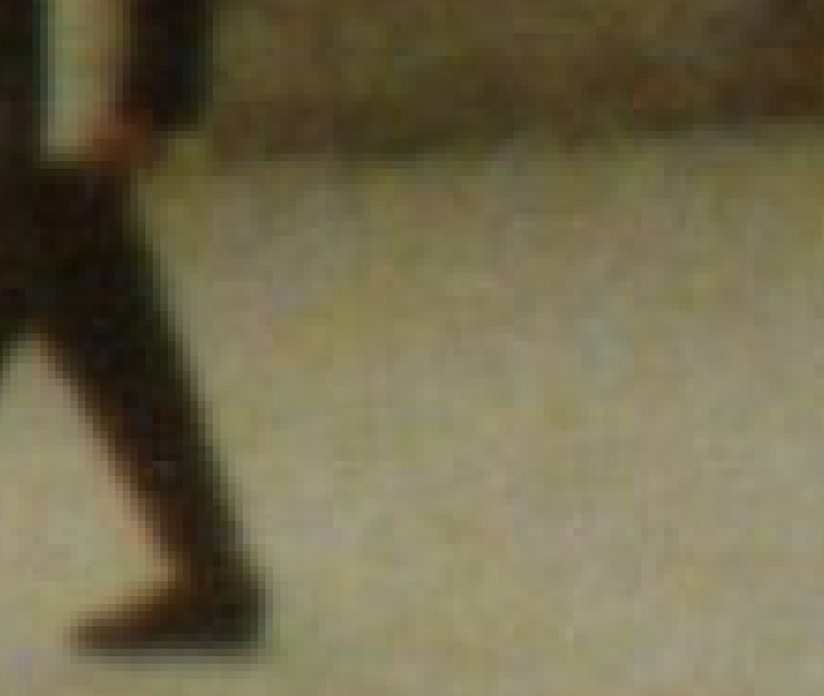