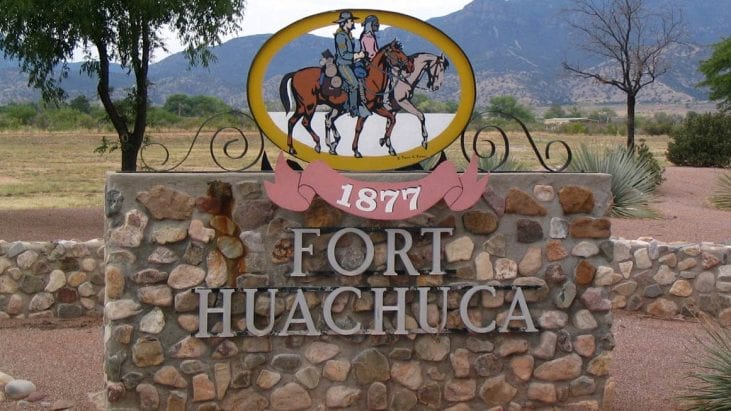 The following case was submitted to The Black Vault / TBV Investigations. However, after numerous attempts by team member Rob Mercer to contact the witness by phone and email, they did not return any messages.

We decided to archive the case, in hopes the witness may reach out in the future, or corroborating testimony can be discovered.

The following was submitted by the witness (unedited):

We had just finished our training for the day, which was around 3:00 pm, and were in formation for our usual daily update. One particular day, we were told that the base was on lockdown.

No one was allowed to leave the base. We naturally asked why, and were given no explanation. Since we were all stuck on the base, we spent most of the evening in the day room, where there were lounge chairs and a TV. Later that night, on the local evening news out of Tucson, there was a story about a UFO seen in the area. A large (at least the size of a football field), black, slow moving, triangular shaped object was spotted in the sky, very close to the base (SHOWING UP IN BROAD DAYLIGHT!)

A policeman took video of it on his dashcam, and followed it for MANY miles (north to northeast), to around the Scottsdale area, where it disappeared. This sighting had to have lasted a few hours due to the distance from where we were (southern Arizona), to the area where it disappeared (and it’s slow speed). I’ve looked online and never seen that video, or even clips of it.

So, even though it made the news, we saw the short video clip, no one ever spoke of it again. I would think that the policeman (or sheriff) that followed it would remember it, or the video would have somehow gotten leaked on YouTube considering how interesting it was! I’ve seen the video of the Phoenix lights, and this was NOT the same thing.

I’m baffled that a story like this would just disappear! Added note: Ft. Huachuca was testing drones at the time, so we were used to seeing test aircraft in the sky. The fact that they locked down the base leads me to believe it wasn’t ours!