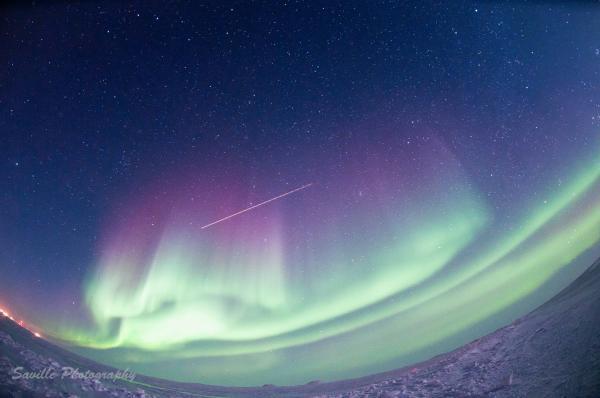 The following was submitted anonymously to The Black Vault:

Back in March 10, 2011 well after midnight between 1am MST and 3am MST while out on the Arctic Ocean ( Beaufort Sea ) a few miles from Tuktoyaktuk, Northwest Territories, I was out shooting the Aurora Borealis ( aka northern lights ) when I was startled to spot fast moving red lights coming in my direction from the west.

I continued shooting long exposure photos ( 8 sec to 30 sec ) and in this photo you can clearly see a long streak as this plane ??? cruised above me at a super speed, much faster than a regular airline jet. I have a few other photos from this series as the plane disappeared in a eastery direction…once almost out of view the sonic boom that followed scared the crap out of me, being out on the ice alone, in the dark! it sounded like thunder and the explosion startled me to say the least.

The weird thing about this whole episode was that a few days later my computer and hard drive, where I had all my photos of the aurora stored ( 5500 + photos ), was hit with a virus of some sort and all of my files were completely destoyed.

I had no back up copies whatsoever. I never did recover my year and a half of aurora photos from 2010 thru March 2011. This happened after posting a few select shot onto my Flickr photostream at http://www.flickr.com/photos/[email protected]/