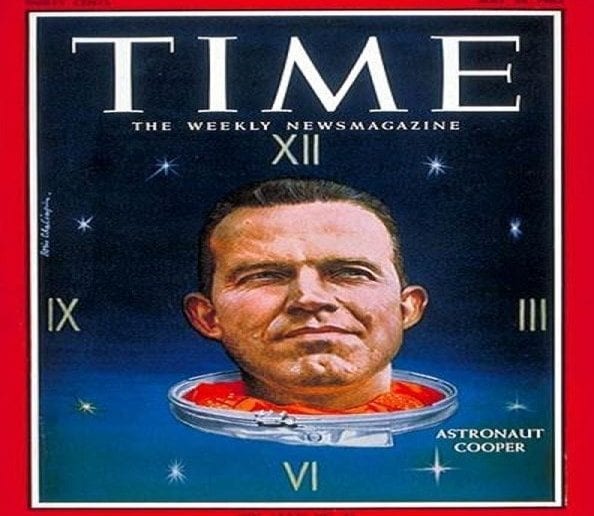 According to a taped interview by J. L. Ferrando, Major Cooper said:

“For many years I have lived with a secret, in a secrecy imposed on all specialists in astronautics. I can now reveal that every day, in the USA, our radar instruments capture objects of form and composition unknown to us. And there are thousands of witness reports and a quantity of documents to prove this, but nobody wants to make them public. Why? Because authority is afraid that people may think of God knows what kind of horrible invaders. So the password still is: We have to avoid panic by all means.”

“I believe that these extraterrestrial vehicles and their crews are visiting this planet from other planets, which are a little more technically advanced than we are on Earth. I feel that we need to have a top level, coordinated program to scientifically collect and analyze data from all over the Earth concerning any type of encounter, and to determine how best to interfere with these visitors in a friendly fashion. We may first have to show them that we have learned how to resolve our problems by peaceful means rather than warfare, before we are accepted as fully qualified universal team members. Their acceptance will have tremendous possibilities of advancing our world in all areas. Certainly then it would seem that the U.N. has a vested interest in handling the subject quickly and properly. I should point out that I am not an experienced UFO professional researcher – I have not as yet had the privilege of flying a UFO nor of meeting the crew of one. However, I do feel that I am somewhat qualified to discuss them, since I have been into the fringes of the vast areas of which they travel. Also, I did have occasion in 1951 to have two days of observation of many flights of them, of different sizes flying in fighter formation, generally from west to east over Europe. They were at a higher altitude than we could reach with our jet fighters….If the U.N. agrees to pursue this project and lend the credibility to it, perhaps many more well qualified people will agree to step forth and provide help and information.”

– Astronaut Gordon Cooper addressing a U.N. panel discussion on UFOs and ETs in New York, in 1985; Panel was chaired by then U.N. Secretary-General Kurt Waldheim. The above message was given to the U.N. by Astronaut Gordon L. Cooper, one of America’s original seven Mercury Astronauts. Cooper orbited the Earth for a record 34 hour, 22 orbit flight in the spacecraft ‘Faith 7’, in May of 1963. He has been outspoken about the need for an open inquiry into UFOs – based on his own personal experience of sighting UFOs in space and the testimony of other Mercury, Gemini and Apollo Astronauts.

“One of the few individuals whose prominence is beyond question has, however, over the past few months, dared to open his mouth and challenge the status quo. Gordon Cooper was one of America’s original astronauts. He helped pioneer this country’s space exploration efforts when, aboard a tiny space capsule known as Mercury [Faith] 7, Cooper orbited the Earth for 34 hours, proving that man could live outside our atmosphere for prolonged periods. His patriotism, bravery and respectability go without saying… Cooper has recently made several public pronouncements concerning his strong belief in UFOs. While a guest on the Merv Griffin Show, Cooper shocked the viewing audiences by speaking for over five minutes on a topic that was only within the past few years often considered too bizarre for polite conversation. But there were some things that Cooper wouldn’t even discuss on the air in front of the curious multitudes. Luckily Lee Spiegel is a personal friend of Gordon Cooper. They have conferred on several occasions, and while in the company of the man who is bound and determined to crack the ‘Cosmic Watergate’ which he is convinced exists within the higher echelon of government, the former space traveler is more than happy to talk about his UFO experiences – and they are many. In the early 1950s, Cooper was assigned to a jet fighter group in Germany.

While stationed there, he remembers very vividly the week an entire formation of circular objects passed over the Air Base on almost a daily routine. ‘We never could get close enough to pin them down, but they were round in shape and very metallic looking,’ Cooper points out. UFOs were to continue to haunt him when the Air Force Colonel was transferred several years later to Edwards Air Force Base Flight Test Center in the California desert. What happened one afternoon while he was on duty at this military base is evidence enough that the government definitely does keep a lot of secrets when it comes to UFOs! The incident took place in the late 1950s, either 1957 or 1958 – as Cooper can best recall; and to this day, the photographic evidence of an actual UFO touching down upon the Earth is being kept under wraps. During this period, Cooper was a Project Manager at Edwards Air Force Base, just three or four years before entering America’s space program. After lunch this particular day, Cooper had assigned a team of photographers to an area of the vast dry lake beds near Edwards. In a taped interview with UFOlogist Lee Spiegel, the former Astronaut disclosed that while the crew was out there, they spotted a strange-looking craft above the lake bed, and they began taking films of it. Cooper says the object was very definitely ‘hovering above the ground. And then it slowly came down and sat on the lake bed for a few minutes.’ All during this time the motion picture cameras were filming away. ‘There were varied estimates by the cameramen on what the actual size of the object was,’ Cooper confesses, ‘but they all agreed that it was at least the size of a vehicle that would carry normal-sized people in it.’ Col. Cooper was not fortunate enough to be outside at the time of this incredible encounter, but he did see the films as soon as they were rushed through the development process. ‘It was a typical circular-shaped UFO,’ he recollects. ‘Not too many people saw it, because it took off at quite a sharp angle and just climbed straight on out of sight!’ Cooper admits he didn’t take any kind of poll to determine who had seen the craft, ‘because there were always strange things flying around in the air over Edwards.’ This is a statement Lee Spiegel was able to verify through his own research efforts, having obtained closely guarded tapes of conversations between military pilots circling the base and their commanding officers in the flight tower, tracking the presence of unknown objects. ‘People just didn’t ask a lot of questions about things they saw and couldn’t understand,’ notes Cooper, who adds that it was a lot simpler to look the other way, shrug one’s shoulders, and chalk up what had been seen to ‘just another experimental aircraft that must have been developed at another area of the air base.’ But what about the photographic proof – the motion picture footage – that was taken? ‘I think it was definitely a UFO,’ Cooper states, as he makes no bones about it. ‘However, where it (the object) came from and who was in it is hard to determine, because it didn’t stay around long enough to discuss the matter – there wasn’t even time to send out a welcoming committee!’ After he reviewed the film at least a dozen times, the footage was quickly forwarded to Washington. Cooper no doubt expected to get a reply in a few weeks’ time as to what his men had seen and photographed, but there was no word, and the movie *vanished* – never to surface again…. On coast-to-coast television, Cooper recently made a blockbuster statement that had the telephone lines tied up the next day, as viewers telephoned the stations which carried the syndicated Merv Griffin Show, anxious to find out if their ears had been playing tricks on them the night before. Toward the end of the talk-show host’s interview with the former Astronaut, Merv broke into a secretive tone of voice right on the air, and aimed a hundred-thousand-dollar question at his guest:

‘There is a story going around, Gordon, that a spaceship did land in middle America and there were occupants, and members of our government were able to keep one of the occupants alive for a period of time. They’ve seen the metal of the aircraft and they know what the people look like – is that a credible story?’ For all intents and purposes Cooper should have laughed for assuredly such a speculative story belongs in the category of science fiction or space fantasy. But Gordon Cooper kept a straight face when he replied: ‘I think it’s fairly credible. I would like to see the time when all qualified people could really work together to properly investigate these stories and either refute or prove them.’ The bombshell had been dropped. Cooper went on to say that from the various reports of UFO contacts and abductions he had been privy to, he was convinced that the occupants of this crashed UFO were ‘probably not that different from what we are,’ – that they are almost totally humanoid (i.e., have two arms, two legs, a torso and readily identifiable facial features) in appearance. Taken aback by what Cooper had said over the national airwaves, Lee Spiegel telephoned Cooper’s office the following morning and managed to get past his private secretary, though others in the media were getting the cold shoulder. ‘Cooper admitted to me that he could have revealed more on the air, but he decided not to play his entire hand because he felt certain that some ‘official eyebrows were going to get raised’.'”