Analysis of a Specimen Purported to be a Skin Fragment from a Reptilian Type Creature (Event Date: January 2, 2008)

The background of this event as reported in an e-mail (3/11/2009) from Derrel Sims follows:

“At approximately 2:40 am, January 2, 2008 two Leyton, UT men (ages 23 and 32) were startled by a commotion outside their home, approximately ¼ mile south of Hill AFB. Simultaneously, both of their cell phones rang and caller ID indicated “unknown”. Both men left the house and were surprised to find two sets of footprints in the 8” deep snow.

Seven were approximately 2.5 feet long, with no entry or terminal prints, having three toes resembling a lizard track. The other set of footprints (also with no entry or terminal prints) resembled deer tracks without the dew prints. The men took several photographs of the prints using their cellular phones. One of the tracks contained a small piece of what appeared to be skin.”

The object is to determine the nature of the specimen found in the track. Following is a photograph of the sample: 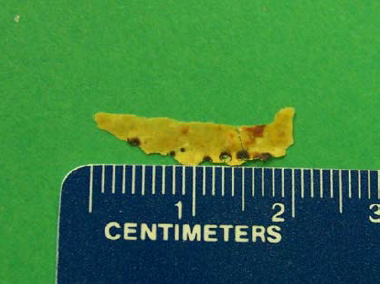