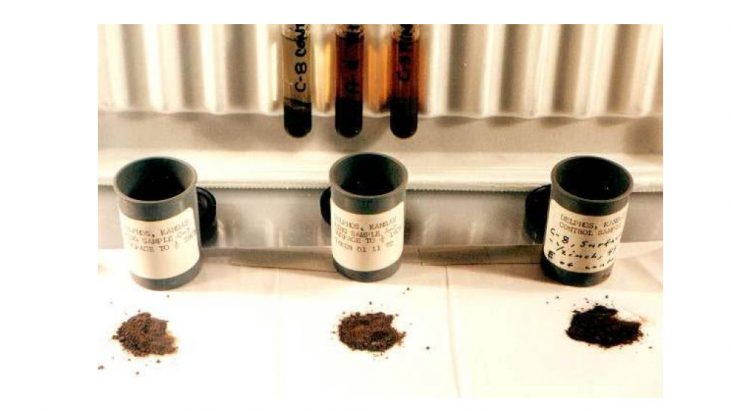 Analysis of Soil Samples Related to the Delphos, Kansas November 2, 1971

The famous Delphos, Kansas CE2 encounter occurred at approximately 7:00 in the evening on November 2, 1971. 16 year-old Ron Johnson was tending sheep when he saw a mushroom-shaped object approximately nine feet in diameter with multicolored lights covering its surface. The object, about 25 yards away, was hovering about two feet off the ground. The UFO sounded like “an old washing machine which vibrates.” When it took off it temporarily blinded Ronald with a bright light from its base. Ron went to get his family, and when they returned the entire family saw the object in the sky.

At the site where the UFO had hovered witnesses saw “a glowing ring on the ground” and luminescence on nearby trees. Ron’s parents experienced numbing effects on touching the ring. One investigator said that the soil “felt strange, like a slick crust, as if the soil was crystallized.” On examination the soil was found to be impermeable to water and “dry to a depth of at least one foot”. A foul odor has also been reported by some investigators.

The objective of this analysis was to build on the initial analysis done by Erol Faruk on the Delphos ring soils in the 1970s3. At the very least it is hoped this investigation will be a base case for reference to future analyses. Erol Faruk developed his analytical approach based on his experience as an Organic Chemist. He analyzed these materials using 1970’s technology which has advanced dramatically in 20 years. Computerization, new techniques, and instrumentation have advanced the field of analytical sciences to previously unachievable heights. Yet, Faruk’s work was outstanding and provided preliminary observations and conjectures regarding unknown residues extracted from the ring soils. My approach to the analysis, as an Analytical Chemist, is different; and there is nothing to contradict his initial observations.

Both ring and control soil samples from this event were located on Thanksgiving Day 1998, and received for analyses on December 7th. Thanks to the wisdom of John Timmerman, the samples were preserved in his attic for many years after closure of the CUFOS Chicago office. Documentation/sample labeling existed attesting to their authenticity, and they were encased in their original tightly closed film containers with no sign of tampering.

In reading these conclusions it should be emphasized that the soils analyzed were sampled two months after the event. Also the time that transpired before this analysis is 27 years. It is unknown if any changes may have occurred to the samples over this period of time. The following conclusions are based on the results of the current analysis.

1) There has been a definite release of material. This analyst concurs with Erol Faruk in that it was most probably deposited as an aqueous solution. The material, excluding any volatiles such as the water, coats the soil’s surface, still imparting the hydrophobic ‘effect’ noted 27 year’s ago. This non-volatile material amounts to approximately 2-3 wt.% of the ring soil. Following is its composition and a rough estimate of the amounts.

2) The humic substance specifically appears to be fulvic acid. It has properties resembling a mull type humus which occurs under conditions of high biological activities such as under grass vegetation and soils under cultivation. This material coats the soil surface, initially imparting a hydrophobic effect. On water addition to the ring soil, followed by agitation, it solubulizes and the soil readily loses its ‘apparent’ hydrophobic effect. There is speculation that this predominating component is actually the result of decomposition from the original release material. This cannot be confirmed. However, this analyst leans toward the hypothesis that the fulvic acid is originally part of the release. This is based on observations regarding some physical properties when the soils were sampled in 1971, e.g. the apparent hydrophobic ‘effect’ and lighter color of the ring soils. The present day samples still retain these properties.

4) Humic substances in the presence of oxalate derivatives and a suitable catalyst, e.g. hydrogen peroxide, may possibly cause the chemiluminescence (glowing) effect.

5) The presence of sulfide/mercaptan could explain any obnoxious odor which purportedly emanated from the ring soils.

6) The ring soil was not exposed to a physical effect such as high temperature.

7) The analysis neither proves nor rules out a UFO source of the release. The above natural products have many useful properties. Specifically, humates are known for their chelation/bonding to metals and organics. “Earthside” we use them in fertilizer and for removal of toxic metals and organic pollutants. It is natural to assume intelligent extraterrestrial life forms would also use them. One speculation is they are perhaps waste products of a biological process.

8.) A speculation is offered by a colleague (Dr. J. Robert Mooney). It is based on the presence of the high concentration (5%) of oxalic acid. (The following may sound bizarre, yet isn’t the whole UFO phenomena bizarre? It is worth contemplating.) Oxalic acid is a natural product in the soil. However, such a high concentration would not be expected from the usual plant source. Exhaust from a low temperature ionization or combustion engine (whose fuel source was elemental carbon) could leave a high concentration of the acid along with other lower molecular weight acids. Of course the major components from such an engine would be expected to the carbon dioxide and carbon monoxide. These would be lost as gases. The acids would concentrate in the soil beneath the exhaust. Use of elemental carbon, as a fuel, seems very reasonable as it is safely transportable and contains a high energy density. It is recommended that future ring sites be carefully assayed for oxalic acid and other low molecular weight acetic components.

9.) Finally, others have countered that the release represents the products of “well seasoned barnyard soil”. If this were the case there should be much higher concentrations of elements such as nitrogen, phosphorus, and potassium present. Also there should be evidence of significant amounts of other components such as urea, uric acid, and ammonium components, which are typical of animal waste and its decomposition products. These are not detected. Only the fulvic acid predominates.

The following are the word document files, which contain images and breakdowns of the infrared spectra.

Analysis of a Fragment near the Roswell Crash Site (Event Date: Approximately 2-3 July 1947)

Analysis of a Fragment “I-Beam” from a Purported Crash Site of an Unknown Airborne Craft on the Plains of San Augustin, New Mexico circa Early July 1947 (CMS Case File: 52614)