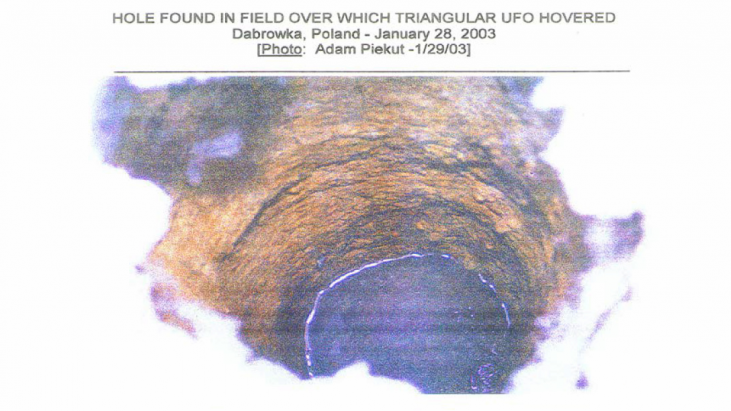 Analysis of Soil from a Hole over which a Triangular UFO Hovered (Dabrowka, Poland, January 28, 2003)

The background below is from the request for infrared analysis as written by Nancy Talbott.

At about 5:20pm (dusk) on January 28, 2003 Zofia Marciniak, a resident of Dabrowka, Poland, was in her yard exercising her dog when she saw a “very bright” 1/2-meter long triangular-shaped object hovering just at treetop level over the field next to her home. The object, which hovered silently about 200m away from the witness, was covered with many multicolored lights (“red, yellow, green and blue and all the same size,”…like a “Christmas tree”) and remained stationary and visible for about 15 minutes. Mrs.Marciniak said that the edges of the triangular UFO were indistinct and that her dog did not bark during the incident; in fact, she’s not sure exactly where the dog was during the time she watched the UFO.

After watching the “Christmas Tree” UFO for about 15 minutes Mrs. Marciniak went back to her kitchen to take something off the stove, returning to her back-yard after 2-4 minutes to find that the UFO was not visible at first — but then reappeared farther away and more to the right. When it reappeared the lights were at first all white, but then became colored again. Then the lights gradually dimmed and went out over a period of about one minute and the object was gone.

She had heard that UFOs had been reported by other residents in her general area and assumed this might be what she had seen, but states she was more curious than afraid. She also reported that she had noticed helicopters flying low over her area on-and-off for 2 years prior to her sighting — and that she then noticed many “long, skinny planes” which looked abnormal to her, flying below the treetops in the same area immediately afterward (“more planes than before”).

Later that night, around 9:00pm, Mrs. Marciniak called her grandson, Adam Piekut, and told him what she had seen. Adam arrived the next afternoon and went into the field to see if any physical evidence might exist which could be related to the UFO’s presence. Since it was the middle of winter deep snow covered the fields and he expected that any unusual markings or tracks would be clearly visible.

What Adam found in the fallow field — directly beneath where his grand-mother indicated the UFO had hovered — was a 30cm-diameter round hole which he measured to be in excess of 5m deep, with about 1m of standing water at the bottom. And, although it appeared that the hole had been “drilled” (he could see a “spiral threading” inside the hole down to the water level), he could find no remnants of the dirt which must have been removed to create it. There was absolutely no soil scattered anywhere over the snow-covered field or around the hole itself, nor could Adam understand how there could be water present in the hole in January, when the temperature was below freezing.

In late-April, 2003, Adam took a soil sample from approximately 0.5m down inside the hole and a “control” sample from surface soil from the field about 10m away from the hole.

The objective of this analysis is to examine the hole soil for unusual components. Specifically, determine whether calcium oxalate is present. Calcium oxalate has been found in other physical traces related to UFOs.

1.) No calcium oxalate is detected in the hole soil. The soil is composed of primarily quartz, kaolinite clay, a smaller amount of calcium carbonate, and probably minor amounts of other minerals. The control soil obtained from approximately 10m away in the field is also comprised of mostly quartz. Possibly small amounts of other minerals are present. However, the control does not contain calcium carbonate or kaolinite.

2.) The surface control soil would expectedly be different from the hole soil at a collected 0.5m depth. The control should probably have been taken from the same depth.

3.) There are no radioactive materials present.

Analysis of Black and White Substances on the Surfaces of Bark involved in a Close Encounter with an Unknown Circular Craft (Monroe, New York, Early 1980s)

Analysis of a White Material that Appeared to Materialize in a Residence in the Presence of Twin Experiencers (near Oxford, Maine, September 2015)