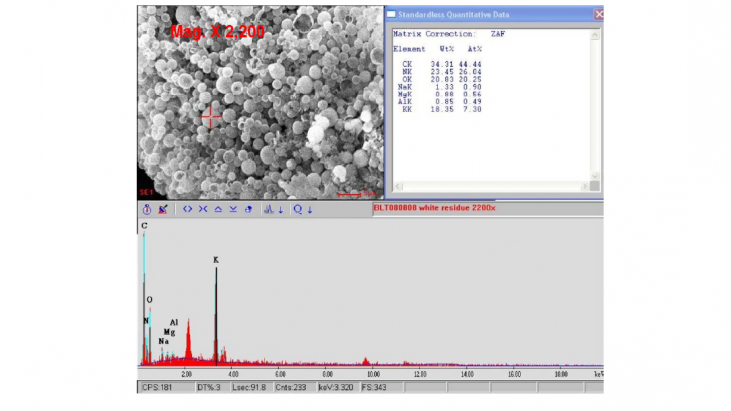 Analysis of Privet Leaves and Soils Related to a Purported UFO Sighting in Levittown, PA (July 8, 2008)

The background of this event is reported in the September 2008 MUFON Journal and follows:

“Denise Murter was out in the yard with her dog at 4:10 AM on July 8, 2008. This was her fourth sighting since mid-April. She looked up in the sky and saw four lights this time, three on the front of the object that looked like two eyes and a nose and were as bright as headlights, and a pink colored light toward the rear of the object. The craft emitted a blue fog out of what appeared to be the rear; the fog contained silver flakes which fell through two trees, filtering down through the trees until they hovered about three feet off the ground. After a while the silver flakes went back up to the object. The witness observed the whole encounter for 40 minutes this time. A robin which had lived in one of the affected trees for four months was found dead on the patio the next morning.” (F.I. Bob Gardner)

The object is to determine if there are any anomalies in the leaf and soil samples exposed to the fog/silver flakes.