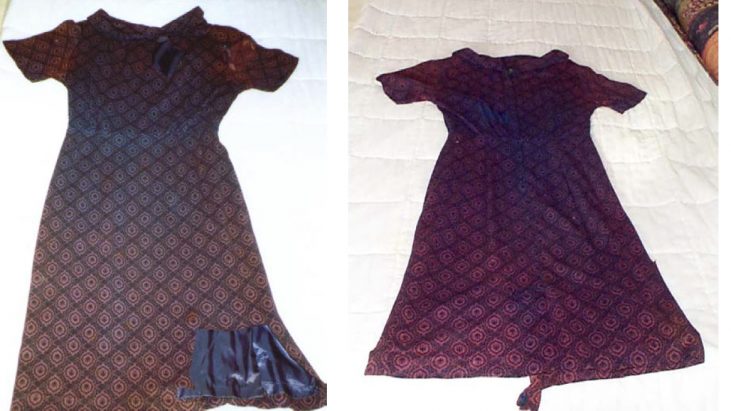 Analysis of the Dress Worn by Betty Hill During the September 19, 1961, Abduction in New Hampshire

This famous case is well documented in many publications and on many internet web sites. The reader is directed to these easily locatable literature references for the details. The reader is especially directed to the classic book on the event, “The Interrupted Journey”1, and “The UFO Encyclopedia”2. A brief scenario follows.

On September 19, 1961, Betty and Barney Hill, along with dachshund “Delsey”, were returning home (Portsmouth, New Hampshire) from an extended weekend pleasure trip to Canada. Their itinerary took them to Niagara Falls, then to Montreal, and home. They were traveling south on US Route 3 in central New Hampshire. At approximately 10:15 they noted a “bright star” which appeared to move erratically. They continued to observe it as it apparently paced them and got closer and closer. Barney stopped to retrieve a 0.22 pistol from the trunk. After resuming the drive, both Betty and Barney looked at the object through binoculars. They observed a spinning, flattened circular disk with multicolored lights on the rim. About two miles north of North Woodstock, the object descended and hovered about 100 feet in the air.

No spinning was noted. A blue-white fluorescent glow shone through its windows. The object appeared to be the size of a 4-engine aircraft. Barney stopped the car and got out. He could see several uniformed, human-like figures. He suspected they were about to be abducted, jumped in the car, and raced down the road. Suddenly an irregular beeping sound was heard. The Hills felt a tingling sensation and became drowsy. The next thing they remembered was a second series of beeps as they were passing through Plymouth. The craft was gone. Two hours of missing time were noted. They both felt clammy and dirty, and Barney suffered other physical problems. Hypnosis of both Barney and Betty suggested they had been abducted. Both Betty and Barney were subjected to physical examinations. Further details of what may have occurred can be found in previous cited references. The object of this report is to document the analysis of the dress worn by Betty Hill during the abduction.

1.) The dress fabric is identified as a cellulose acetate knit. The discolored pink/magenta areas of the dress have suffered chemical effects on both the dye and the fiber. These areas also appear to contain more particulate material than a control. The fabric is coated with a biologically derived material which is composed of mostly protein (both water soluble lower molecular weight and insoluble higher molecular weight) and a small amount of natural ester-type oil. There is evidence that this material originally contained moisture. (See Conclusion 2.) This material is predominantly present on the discolored swaths. (Very small amounts are present on the control.)

More of the substance is on the exterior surface of the dress than on the interior for Swaths #1 and #2. This evidence shows the substance originates from an external source. The material has completely permeated swath #3. There is indication that the pH is more acidic than the control. Some of this protein and natural oil may have suffered some degradation. Very small amounts of individual particulates consist of materials one would expect to find on a dress which has hung in the closet for four decades, i.e. house dust, pet hair, and assorted natural and synthetic clothing fibers.

2.) Like the outer fabric, the lining is also identified as cellulose acetate. However, it is woven. The lining is not discolored, but has a few stains. The fiber in the stain area has not suffered damage. The stain material appears to have almost permeated the lining, though there is slightly more on the side facing the outer fabric. The stain contains, in part, components found in the exterior fabric. These are mostly water soluble proteins and a trace of natural ester-type oil. This suggests the stain is a result of “bleed through” of some of the material found on the outer fabric. It also indicates moisture had to be originally present in the substance. No higher molecular weight insoluble protein is present. Thus, the outer dress fabric apparently served as a filter for the higher molecular weight material, as well as some of the natural oil. Finally, after the stain was removed by solvent extraction, it returned to its original color. So, the dye was not affected by the components of the stain.

3.) The above results clearly rule out any natural substances originating from Betty such as urine, perspiration and vomit. This material came from an external source ruling out urine and Betty’s perspiration. Also, no uric acid was detected further eliminating urine. Vomit was easily eliminated because of the location of the discoloration, which occurs behind the dress and on the underarms etc. I would expect considerable solids deposited on the front of the dress. Only microscopic debris typical of a dress which has hung uncovered in the closet for a long period of time were detected. Also, there should have been a significant amount of carbohydrates present. These were not detected. Additionally, there was no bad odor.

Analysis of Dress for DNA

Another Pennsylvania Bigfoot Close Encounter with a Car