The event is described in the analytical request by William Puckett. An edited account follows.

The witness experienced two encounters with a UFO over a two-day period, i.e. early August 24 and early August 25, 2005. It involved a couple traveling from Eagle rock, Missouri to a small camping park near Marion, Ohio. The first encounter was near Indianapolis, IN while traveling east on I-70. The woman (primary witness) saw bright flames to the north. She became quite sickened by a strong odor, which was similar to creosol, sulfuric acid, and tar. She used to work for DOW Chemical and is quite familiar with chemical odors. After continuing to drive east on I-70 the couple stopped for fuel near the Indiana-Ohio Border (Richmond, Indiana).

The woman saw several lights in the sky and became sick again with the same “foul” odor. The next night while driving on U.S. Highway 61 near Mount Gilead, Ohio she sighted a large triangular object. She again smelled the same strong odor and felt a “mist-like” substance on her skin. She had just purchased a new pair of black boots. They were marketed by Wal-Mart, but she purchased them new from a second party. She said she had never worn the boots before the trip. The synthetic suede on the surface of the boots was stripped clean in several areas after her encounters. She said that a “black substance” collected on the carpet of a relative that she was visiting right after the encounter.

The witness suffered physical effects from the encounters for more than a month. The doctor’s diagnosis was “chemical pneumonia” and kidney infection.

The objective is to examine a boot worn during the events to determine whether there are any residues that may relate to the suede to being stripped clean in various areas. Following are photographs of the left boot which clearly shows the damage to the suede surface. 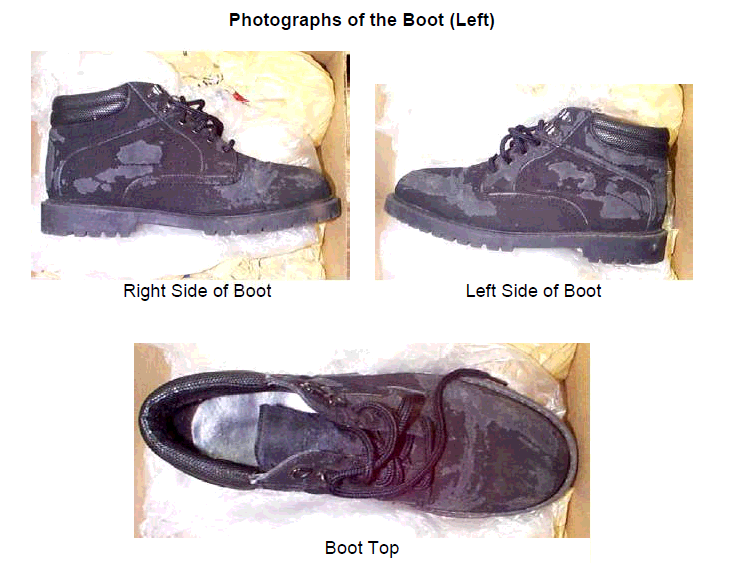 1.) No unusual materials are detected on the boot. The boot is covered with fake suede, i.e. poly(ester urethane) MBI (MBI = Methylene Bis(phenyl-isocyanate which is one of the monomeric units of the polymer). The outer surface of the suede also has some polydimethylsiloxane which is commonly used as a water repellent. Soil particulates are present on the sole and heel of the boot. There is also a small amount of tarry material inside the boot, which consists of poly(ester urethane) MBI, talc, and a biological material containing an amide functionality. The urethane inside the boot is not completely cured. It is probably the glue that holds the suede to the boot. The talc may be from foot powder, and the amide-containing material may be perspiration. No radioactivity above background is detected.

2.) Black particulates found in a plastic bag containing the boot are fake suede poly(ester urethane) MBI, obviously from the boot.

3.) Though not analyzed, I speculate the black substance reported to be on the relative’s carpet was also some of the boot material, specifically a poly(ester urethane, MBI.

4.) It is most unusual that the suede came off of the boot. With the absence of any unusual foreign substances, I can offer two speculations why this occurred. They follow.

The witness described a creosol, sulfuric acid, and tar odor during the event. This is an important clue. Creosol contains phenolic-type materials