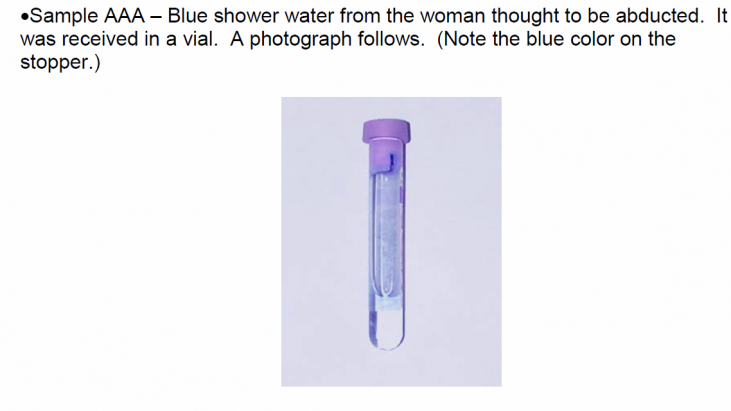 “A south Georgia woman (name and location withheld by request) awoke on Monday, June 23, 2003 at 5:30 a.m. to a strange sight. Looking in the mirror she saw a dried blue substance all the way around her neck, a big blob on her hair on the back of her head, as well as some on the pillow case. Upon a closer look, there was a small amount on the palms of her hands, in between her fingers, and on the back of her arms between wrist and elbow. It looked like she had been trying to resist it being put on her. Her husband who had been sleeping right next to her had none on him, and the two small dogs who sleep with them had none on them. Checking the entire mobile home they could not find a source for the blue stuff plus all the windows and doors were still locked. If this is true – how did it get in the house and on her?

I should point out this person has had many paranormal events in her life ever since she was a little girl. Some I have investigated in the past. I have found her to be very truthful. Because of this back history, I think this event is going to fall into the UFO field. Here is my guess on what happened. No. 1 – They beamed into the house and put it on her, or No. 2 – (the one I like best) they beamed her out and did it someplace else. Also let me add, the two small dogs who will bark at the slightest sound slept quietly all night long.

Now to the substance itself; first of all this does not glow in the dark as reported in some abduction cases. Let me tell you what we do know. The stuff did not burn her skin, nor did it stain the skin, and she has suffered no ill effects from it. When it is dry it looks like water color paint, and when it is in water it is a beautiful turquoise blue (reminds me of blue Kool-Aid.) She said it washed right off, so it is not ink. She said it was highly concentrated as a quart washed off of her. She wanted to get it off and get to work and did not save any. But three days later she washed a hair bow she had been wearing that night and got a bathroom sink full of it and saved approximately a half of pint in a clean jay. It had dried on the pillowcase, but was also on the pillow meaning at some point it was wet. She said she dreamed something wet was being put on her, but has no other memory as to what really happened. Is dissolves very easily in water and has only a slight scent to it. It appears to evaporate very quickly on the finger, like it has a drying agent in it. It appears when dry on cloth to burn at a very high temperature. She stated when water first hit it on the hair bow what looked like steam (but was not) came up, indicating some type of chemical reaction.”

The object of this analysis is to identify the blue substance.

The substance is identified as mostly a mixture of ethylenediaminetetraacetic acid (EDTA) salts. Disodium copper EDTA (Na2Cu-EDTA) is one of the salts and gives the substance its blue color. The other salts are probably derivatives of sodium and possibly other metals, e.g. tetra sodium EDTA disodium magnesium EDTA etc. There is a small amount of poly(dimethylsiloxane). Also indicated is a trace amount of long chain carboxylic acid and probably ester. These later materials could be contaminants.