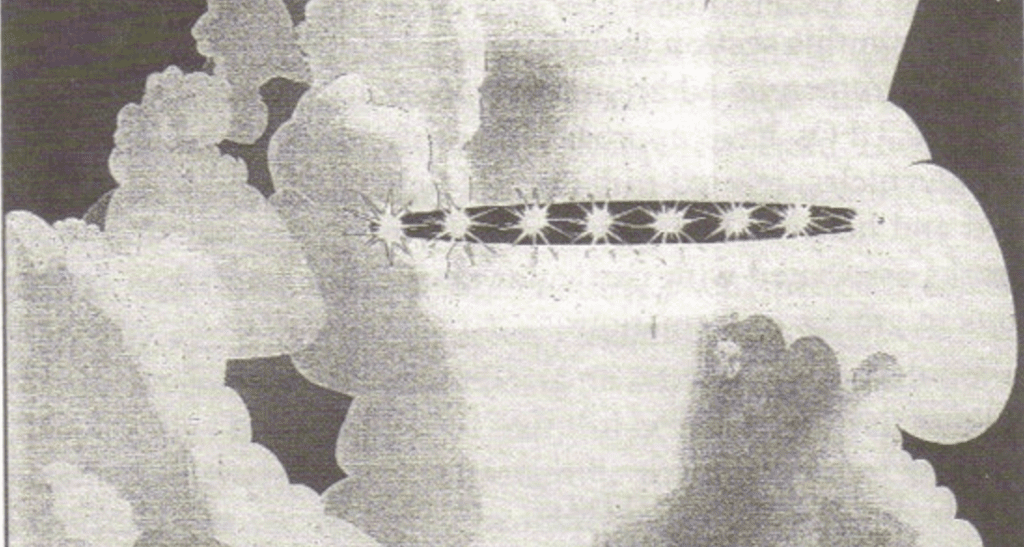 A Boeing 757 piloted by Captain Eugene Tollefson and First Officer John J. Waller, was passing near Bovina, Texas. Captain Tollefson left his seat to look [at a line of regularly flashing lights]. As the lightning flashed behind the lights, it silhouetted something that to the observers appeared to be a large, dark, cigar shaped object between 300 and 500 feet in length.

The following article is saved here for archival purposes. It was originally published here, but has long disappeared.

“Cactus 564” was a routine America West flight that began in Tampa, Florida. The final leg of the flight was from Dallas/Forth Worth into Las Vegas, the ultimate destination.

On the night of May 25, 1995, Flight 564, a Boeing 757 piloted by Captain Eugene Tollefson and First Officer John J. Waller, was passing near Bovina, Texas, just across the state line from Clovis, New Mexico at about 9:25 MST. There were thunderstorms to the northeast, and the lead flight attendant was watching the lightning flashes in the night sky.

This flight attendant was the first to notice a line of regularly flashing lights in the sky to the north and below the airliner. The First Officer then saw them as well, and they observed a horizontal row of eight strobe-like lights, flashing on and off in sequence from left to right.

The lights, which were as bright as aircraft landing lights, were at an altitude of between 30,000 and 35,000 feet, and were bright white with a tinge of blue.

Captain Tollefson left his seat to look, and he saw the left to right sequencing lights also. As the lightning flashed behind the lights, it silhouetted something that to the observers appeared to be a large, dark, cigar shaped object between 300 and 500 feet in length, depending on how far away it was.

After about five minutes of observing the object, Flight 564 called Albuquerque Air Traffic Control to report the object. Albuquerque ATC noted that the position of the object was over a restricted military area called “Tieband.” The controller also noted that the description sounded similar to that of a tethered aerostat except for the large number of strobes. However, the controller contacted sites that would know if an aerostat or any other military aircraft were in the air that night, and was given negative responses all around. The controller contacted other aircraft in the area, but no one else was able to see what Flight 564 saw.

The controller then contacted NORAD, who at first reported nothing on their radar at that location, then called back and said they had an unidentified return in that area, then called back again and said that the radar return had been a common small airplane with a malfunctioning transponder. An air traffic controller later said that there was yet another call from NORAD reporting that they later did have an unknown at that precise location, but this has never been corroborated. There is a transcript of the controller’s radio conversations at UFO Plaza and there is a Real Audio excerpt of the conversations from the “Sightings” TV program at Cosmic Videos

No satisfactory explanation has ever been found for the Flight 564 sighting.

Another article archived here, was written by the Fund for UFO Research or FUFOR.

A cigar-shaped object with a row of brightly flashing lights along its length was observed over the Texas panhandle by the crew of a westward bound America West B-757 airliner on May 25, 1995. The case was thoroughly investigated by Walter N. Webb on behalf of the UFO Research Coalition, who interviewed the crew and air traffic controllers. Webb also obtained a copy of the Federal Aviation Administration (FAA) voice tapes of conversations between airplane and ground during the sighting.

America West Flight 564 was cruising at 39,000 feet near Bovina, Texas, en route from Tampa, Florida, to Las Vegas, Nevada. First Officer John J. Waller and a flight attendant saw, off to their right and somewhat below their altitude, a row of bright white lights which sequenced on and off from left to right. Waller contacted the Albuquerque FAA Air Route Traffic Control Center while the sighting was in progress and checks were made with military installations in the area, but no explanation could be found.

As the airliner proceeded westward, the lights began dropping behind. Then they observed the phenomenon against a background of dark thunderclouds. When the background clouds pulsed with lightning, they could see the silhouette of a dark, wingless, elongated cigar-like object around the strobing lights.

Though they did not know the object’s exact distance, the pilot and co-pilot estimated its length to be 300-400 feet.

Air traffic controllers said the object was not visible on FAA radar. One of them contacted the North American Air Defense Command (NORAD), which monitors North American air space by radar, and said that NORAD had confirmed an unidentified radar track in the vicinity. This later proved to be a small aircraft whose transponder was not initially operative.

Next morning the controller said he had checked with NORAD again and was told that they had tracked another, very unusual target in the same general area a short time after the first–something that at first was stationary, then accelerated rapidly and stopped abruptly, repeating this sequence several times. The bursts of speed were computed to be between 1,000 and 1,400 m.p.h. This report, based on the testimony of one air traffic controller, could not be confirmed independently.

Webb filed Freedom of Information Act requests for Government information about the case, and also checked military installations for any activities that might explain the sighting, but no known object or phenomenon could be found that correlated with the sighting.

The below was archived by UFO Casebook.

** They have not been authenticated officially (obtained from an official source) by The Black Vault, though at this point, there is no direct concern they are fabricated.

(NOTE: The last question above cannot be readily identified as having come
from the Albuquerque FAA controller. Perhaps it was, however since a conversation
with Cannon AFB began just at this point it could well indicate that the conversation
was being monitored. The very next statement heard is the Albuquerque FAA
controller calling to Cannon AFB.)

ABQ: “Cactus 564…we checked with Cannon and they don’t have
any, uh, weather balloons or anything up tonight. Nobody
up front knows any idea about that. Do you still see it?”
AW-564: “Negative..back where we initially spotted it it was between
the weather and us and when there’s lightning you could
see a dark object…and, uh, it was pretty eerie looking.
This ‘air coptr..(mumbled)’ right here going eastbound…
maybe he’ll see it.”
ABQ: “Okay..”
AW-564: “First time in 15 years I’ve ever seen anything like this.
It’s probably military in that restricted area.”
ABQ: “Cactus 564..you contact Albuquerque Center 132.8,
goodnight.”
AW-564: “132.8 contact 564.”

Just then it sounds like another person in another aircraft breaks
in on the conversation. It is never clear just what type of aircraft this is
but the individual has clearly overheard the recent discussion.

After a minute or so Albuquerque Center starts up a conversation
with another aircraft. Again it is unclear at first what aircraft this is as
there was no identification given and this aircraft does not preface
it’s transmissions with any identifier. A bit later a statement is directed
to “Hawk 85” which appears to be the aircraft in question.

ABQ: “Cactus 564…you still up?”
AW-564: “Affirmative! 564”
ABQ: “That was south of your position?”
AW-564: “It was north..”
ABQ: “Hawk 85, let’s make it out the left window then.”
AW-564: “Albuquerque, can we get a chance..Cactus 564.”
ABQ: “You know we’re all up here huddled up talking about it. When
it lightning’d you could see the dark object. It was like a
cigar shape from the altitude that we could see it..and the
length is what go us, a…sort of confused, because it
looked like it was about 300-400 feet long. So I don’t know
if it’s a wire with a strobe on it, but the strobe would
start from the left and go right, counter-clockwise…and
it was a pretty eerie looking site, but a, had the strobe..

At this point in the tape copy I received there appeared to have
been some problem as there was a brief approximately 1/3 second
solid tone like a dialtone. Then there was a strong transmission like
another broadcast trying to cut in. The previous conversation continued
briefly and the tone appears again followed by another request to “Albuquerque Radio”.

AW-564: “Albuquerque, 564…last time…just for our notes we’re
going to take a message. was that in a restricted area..and
that was just basically south of Tucumcari when we reported
it?”
ABQ: “Okay…the way you went through, the only restricted area
was on your south side, nothing to the north side…and
those restricted areas are inactive. There shouldn’t be
anything going on.”

ABQ: “Bigfoot…Albuquerque Sector 87.”
BIGFOOT: “Bigfoot’s on!”
ABQ: “Yea..I’ve got a, uh, something unusual and I was wanting
to know if you’all happen to know of anything going on
out here around Tucumcari, New Mexico,…north of Cannon?
I had a couple of aircraft reported something 300-400 foot
long..cylindrical in shape, with a strobe flashing off to
the end of it.”
BIGFOOT: “Oh..?”
ABQ: “At 30,000 feet.”
BIGFOOT: “Okay…hang on a second.”
ABQ: “Yeah, I didn’t know if you happen to know of anything
going on out there…no balloons in the area, no nothing
reported?”
BIGFOOT: “Okay, where’s this at again?”
ABQ: “It’s at, uh, well ya’know where…it’s in Tucumcar, New
Mexico, it’s about 150 miles to the east of Albuquerque.”
BIGFOOT: “Okay, eh…how far from Holloman?”
ABQ: “Eh, Holloman, it looks like it’s off the zero-three-zero
of Holloman about 220 miles.”
BIGFOOT: “Okay…I think, okay…it’s kind’a hard for us to see here.
Okay, they’ll be zero for about 200. Um…we don’t have
anything going on over there that I know of.”
ABQ: “Yeah…I didn’t know, we’ve tried everybody else and
nobody else is…this guy definitely saw it run all the way
down the side of the airplane. Said it was a pretty
interesting thing out there.”
BIGFOOT: “Okay, it was at 30,000 feet..”
ABQ: “…30,000 feet.”
BIGFOOT: “It was like..long…um..”
ABQ: “Yeah, it’s right out of, right out of the X-files. I mean
definite UFO or something like that, I mean.”
BIGFOOT: “..and..it..ooohh..ya’ll are serious about this (laughing).”
ABQ: “Yeah, he’s real serious about that to, and..uh..he looked
at, saw it, no balloons are reported tonight, nothing in
the area…”
BIGFOOT: “It was strobing off the front he said?”
ABQ: “Uh…I think the strobe was off the tail end of it.”
BIGFOOT: “Okay…strobe tail end.”
ABQ: “He said it was kinda, well it was dark but..(aside to
someone else)..did he say there was lights in it?”
BIGFOOT: “How long did he say it was?”
ABQ: “He said it was 300-400 foot long.”
BIGFOOT: “Holy smoke!!”
ABQ: “..and we don’t have any air carriers out here so…that
strobing along.”
BIGFOOT: “um..the only thing that I can do is , I wonder if any of
our aerostats cut loose or something ’cause we don’t
have any aerostats there.”
ABQ: “Yeah…not that far to the north.”
BIGFOOT: “I mean…to me it would sound like an aerostat, but..I
don’t think ours are that big though.”