The following was submitted to UFOs NorthWest, and is used here, with permission. It can not be reproduced or copied in any way.

It was a clear cloudless May 31st night with the wind blowing from the north at about 15 MPH. At about 9:09 PM I was watering my garden in the backyard and looked up and saw an amber light almost directly overhead. The altitude of this thing I would guess would be about a quarter of a mile above me. I observed this light slowly travel from the West to the Northeast for a few seconds and then ran into the garage to grab my Canon Power Shot sx710hs camera which took maybe 10 seconds. As I was running back to the backyard I shot a short video clip, but knowing that it probably would not show up I switched to still image, but forgot that the camera was in macro mode. I took a few shots trying to hold the camera as still as possible. If you have ever tried to take a picture of something in the dark without using the flash then you know that it is almost impossible to get a clear picture due to the slow shutter speed. 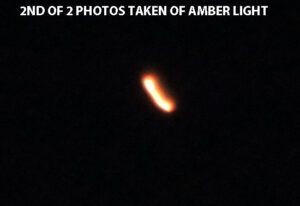 This object the turned a more reddish color and then went south until I could not see it anymore. I highly doubt this was a lantern due to the fact that it was traveling against the wind and also because of the intensity of the light. This is not the first time I have observed fire orange lights here in Hollister. I along with multiple neighbors have observed these reddish orange lights in the sky several times. These things are always in the same spot of the eastern sky at around 8:30 to 9:30 PM, but this one came from the exact opposite direction instead of the usual east. These things have a consistent repetitive flight pattern. Because of the regular occurrence of these things I have built a mobile wide angle camera system connected to a digital video recorder to try to capture these guys in action.

That system is set facing East, but since I set it up there has been nothing until this one coming from the west. I have stopped making reports of these things because of fear of people thinking that I am making this up. I am an experienced astronomer with an 8″ telescope with knowledge of aircraft and such. I take this subject seriously because I had a triangle fly above me a few years ago. I can assure you that these things are not aircraft, drones, Chinese lanterns or helicopters. I doubt anybody has messed with these things more than me.

I have hit them with green lasers, 36 million candlepower spotlight and marine flares. There is no way that these things have not noticed me. I sound like a nut right now, but I have a dozen neighbors to back me. This is the first time I have used this site usually I send this kind of thing to Peter Davenport. I will send the pictures I have along with this report.

I have a question, is there a way to run the photographs of these things through a spectrum analyzer/spectrometer because I know the F.B.I has a database of just about every light source? I am told that this software has the capability to identify the brand and even the model of a given light source. If this has not been pursued that would tell me that nobody is serious about the whole UFO, UAP or whatever acronym they use.