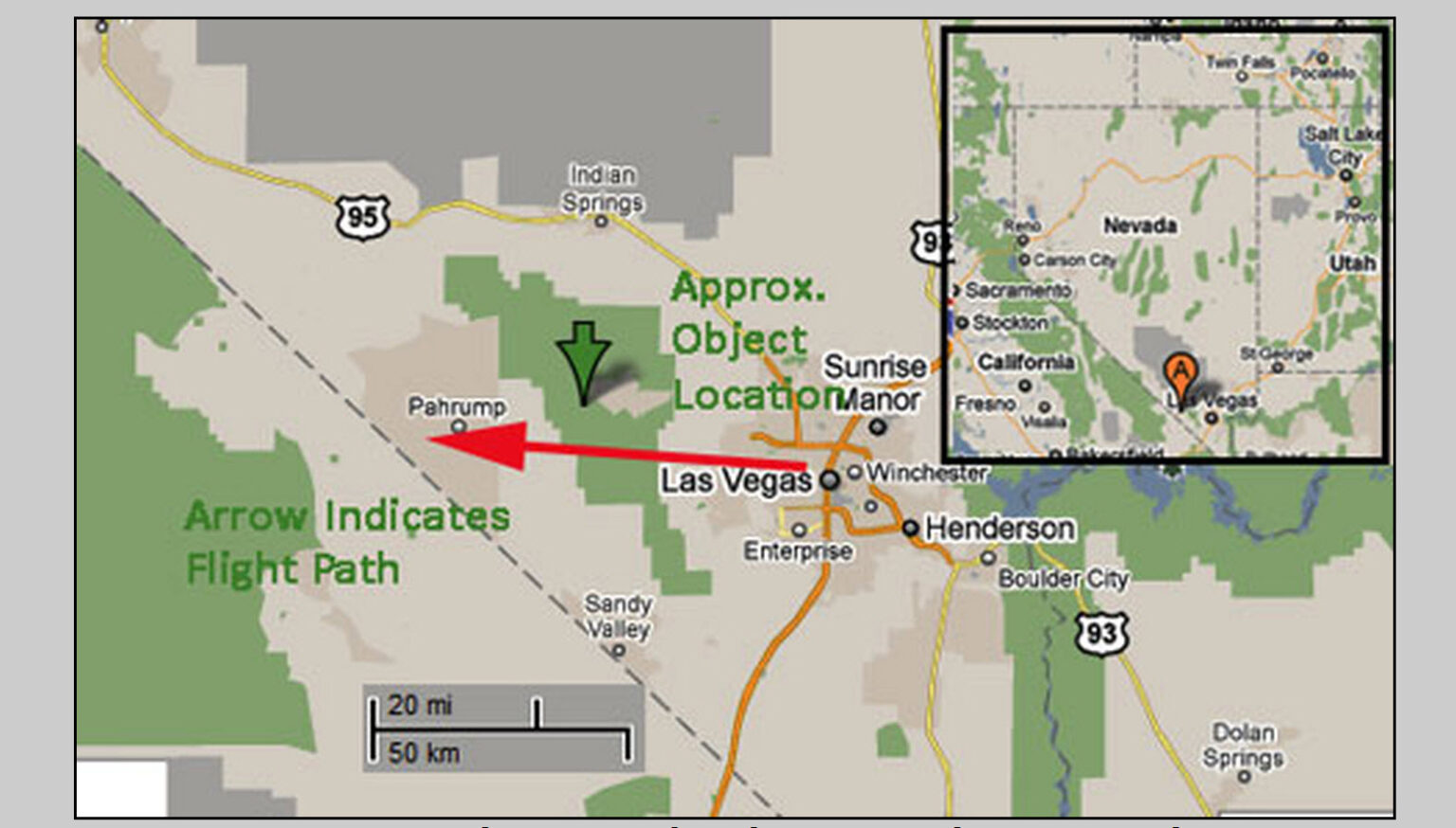 Description: I am an airline pilot. Shortly after departure from Las Vegas, Nevada we spotted a light in the sky. We were on our departure climb Northwest of Las Vegas around 5:30 PM local time. While passing abeam the town of Pahrump we noticed the light. It was moving from Northwest to Southeast at a speed greater than that of an aircraft, but slower than a meteor. It was larger than an aircraft light and blue-green in color. It traveled along the horizon passing from our 1 o’clock position to our 3 o’clock position. At the 3 o’clock position it stopped moving and appeared stationary for about 3 to 5 seconds and then disappeared as though someone turned off the light switch. It appeared to be at approximately 20 miles from our position and just east of Pahrump, Nevada at an approximate altitude of 20,000 feet. During the whole period, our Nav Display was set at a range of 160 nautical miles and our TCAS wasn’t painting any targets. I have around 8,000 hrs of flying and the pilot I was flying with has over 30,000. We both agreed we had never seen anything like that.

Note: Here is an incredible sighting by credible witnesses. Of course the area where the pilots saw the object (light) is close to the “Infamous Area 51.” More analysis will be conducted regarding this case. Updates will be posted.

Update – Preliminary Radar Analysis – March 27, 2011: A “screening analysis” of radar data has identified the airline that spotted the unknown light and has shown unknown targets in the direction, in the position and the time where the object was reported by the flight crew. The targets were moving very slowly towards the northwest which is not the same direction observed by the crew. However, the object could have appeared to be “nearly stationary” at the point that it was observed the crew because it was moving much slower than the aircraft. The aircraft was flying at around 450 mph towards the northwest at the time of the sighting. The UFO was detected at three points by both radars. Analysis shows that the UFO moved west at 94 mph, then north-northwest at 129 mph and then northwest at 225 mph before dropping of the radar. This is consistent with the report that the object stopped moving (or appeared to stop moving) and then disappeared. The above radar map shows a “zoom” of the area of the UFO returns and shows the direction of movement. The zoomed area also shows the plots from two radars.