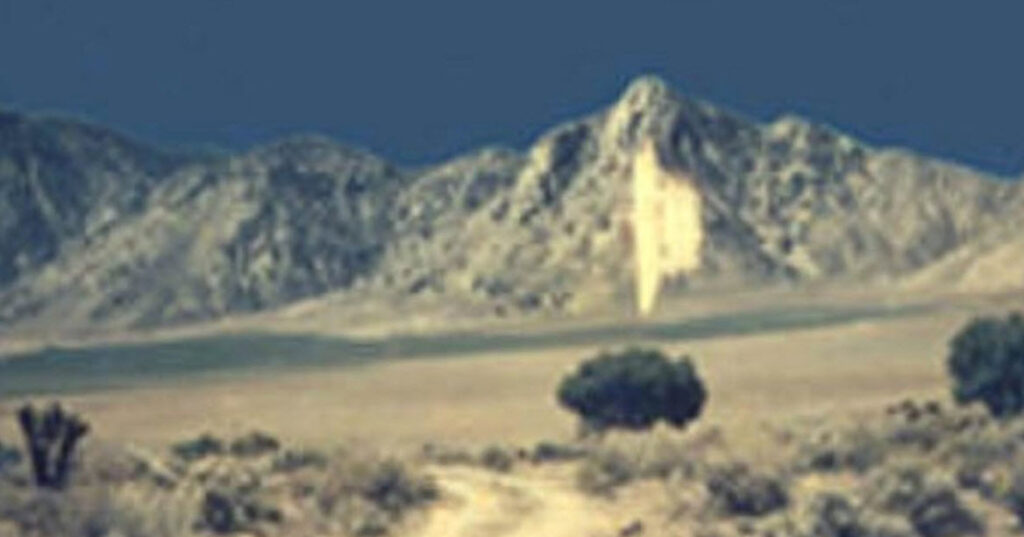 B.C. and his fiancee were riding their Harley Davidson through the southern Sierra Nevada’s, in what is now Lake Isabella, California. They found an old dirt road that led down to the dry lakebed and pulled off the main highway to take some random scenic shots. Neither of them saw anything out of the ordinary at the time. 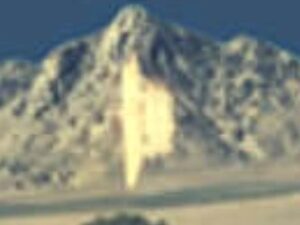 This highly unusual photo has been in my family since before I was born. It filled me with curiosity during my childhood years. As I grew older I had my doubts about it being a real picture, but remained curious over the years. On my 27th birthday my father came by my apartment and gave me a birthday card that included the original color slide of this UFO image.

My father carefully explained how this photograph was shot by a friend of his named B.C., who did not actually see the UFO at the time he took the picture! It wasn’t until B.C. received the box of color slides he had shot that he noticed one picture with an image of a sideways, saucer-shaped UFO which appeared to be parked above an old oak tree.

According to my father, B.C.’s first reaction was that someone at the “Kodak” film lab must have been playing a trick on him. When B.C. showed the color slide to my father, he believed it was worth further examination. My father explained to B.C. how he had gone to some of the UFO meetings that were held at Giant Rock airport out in the Mojave Desert during the early 1950’s and that he believed something was definitely going on. At that time, they were both members of the Self-Realization Fellowship and had heard their guru, Parmahansa Yoganada, say that he believed there was life on other planets. 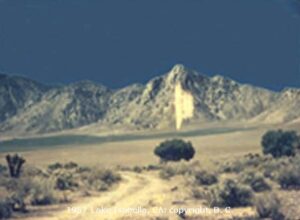 After having some copies and enlargements made, my father decided to take the original slide to the Los Angeles office of Time Life Magazine. It was in their possession for a few days before they concluded that the photo was authentic. According to their tests, it was not a lens flare, an acid splash or a double exposure. Oddly enough, they were instructed by their main office in New York not to run the story or the photo. They claimed it was not their policy to do so. I find this highly unusual considering that Life Magazine had published clear black and white UFO photos in the early 1950’s.

I decided to research if someone could possibly take a photo of something that was invisible to the naked eye. I discovered that our eyes only see a very small amount of the infrared, or ultra-violet radiation around us. Only about one octave of the available vibrations (wavelengths) is registered by our normal consciousness. Film is much more sensitive to the other more subtle energies on our environment. Judging by the colors around the ’57 UFO it is mostly vibrating in the infrared range. Another possible theory is that a field of rotating energy surrounding the craft absorbs photons from bouncing back and registering on the observer’s eye. Those are some of the logical explanations, and yet, as illogical as it sounds I have seen UFOs become invisible on more than one occasion during the day and night – both in and out of the city with and without witnesses. Now you see it… now UFO don’t!

Dr. Elmer Green is a physicist who worked just northeast of Lake Isabella for the Naval Ordinance Test Center, at China Dry Lake, from 1947 to 1957. He frequently heard about encounters with UFOs that would fly into range of their observation cameras. Many times while range testing new weapons systems, good quality films were made of UFOs. He personally saw black and white still shots of UFOs that were taken by other scientists in his work group. While telling his story to scientist and author Richard Thompson, Dr. Green claimed that he knew of some 40 to 50 professional people who had some connection with UFO sightings during weapons testing at China Lake.

Dr. Green had even experienced a clear UFO sighting with the base’s photographic officer, Jack Clemente while watching an AJ Bomber coming in for a landing. According to Dr. Green, “As the airplane flew over, we saw an object about 16 feet in diameter flying about 400 feet below the bomber. The object seemed to be a structured, mechanical craft. It had a semi-circular forward section that was amber colored. In the blink of an eye, the UFO flipped up to the wing of the plane. It remained there, pacing the plane for a few seconds and then it flew away at great speed vanishing from sight in 2 or 3 seconds.”

Dr. Green noticed that even though UFOs looked mechanical, they often seemed to perform beyond the laws of physics. Even though they could move faster than the speed of sound, they did not produce a sonic boom. Dr. Green compared these maneuvers to a spotlight projected on the wall and he considered that they might be real physical structures that were somehow being projected into our space-time. Dr. Green also noted that during his early years at China Lake in 1947, many UFOs were sighted and that he would also regularly see the flashes from atomic bomb air bursts at the Nevada test site nearby. Some of Dr. Green’s co-workers even speculated that there might be a connection between all the UFO activity and the frequent atomic testing.

After showing the ‘57 UFO photo to a senior U.S. space engineer who has helped design many of our latest and greatest spacecraft including the Space Shuttle, I was given the following explanation:

Ambient interstellar light saturates our atmosphere and becomes polarized to our earth’s relative north/south rotation. This angle of rotation is given a relative 90 degree value which can be considered a phase that is unique to all other phases – such as a note on a scale of musical vibrations. As a UFO enters our atmosphere, its relative 90-degree north/south rotation will occasionally align with our Earth’s polarity phase in harmony. During these brief moments of energy alignment UFOs become visible as bright lights or shiny metallic surfaces. This particular UFO is standing on edge, with its polarized energy field 90û out of phase from our Earth’s own polarized energy field.

When Life Magazine decided not to publish this authenticated UFO photo, my father left the original slide sitting unprotected in the desk drawer of his office which had a leak in the skylight. Over the years, mold grew on the film, but fortunately the original image of the UFO has remained intact. Even though this picture is very old it still tells the story of the future – the implications of which are enormous. I believe sometime in the future, the beings that operate these cosmic craft will reveal themselves and awaken all those who are still sleep waking through life. A wise man once said, “Ignorance is bliss… enjoy it while you can.”

“Look! A golden-winged ship is passing my way…”