I saw approximately 10 glowing red orange objects moving slowly (10 to 15 MPH) South-Southeast parallel to I-95. The objects appeared to be East of I-95 by 100 yards or so. The objects turned due East for 2 minutes and then vanished all at the same point. There was one trail vehicle behind the others and it took the same path as the others, but it stayed in the area an extra 2 minutes. It also vanished shortly after turning due East. Note there had been a Brush fire earlier at approximately 5:00 PM and the objects could have been from that, but it sure seemed odd that something could stay aloft that long and be on fire. I am not sure what they were, but it was very odd. There was no noise and the event lasted about 5 minutes. I have video of the trail object.

Additional Information Provided by Witness: Exactly what I thought at first too however, they were going cross
wind at appoximately 75 degrees for 2/3 of the time we watched them and they were not flickering. The wind looked like it was blowing due East the
objects were traveling South-Southeast then due East for a short time andthen vanished. I spoke with people at work and another lady saw two of them back near that area at around 9:00 PM the same night. She has a receipt from Burger King that is time stamped. She will confirm the 9:00 PM second sighting of two of them. Also it was very windy and dry with brush fire warnings out so it would need to be an idiot if they sent fire up in a lantern. My videos suck. I will send it. Some of them are too big to send. I will try to download them off the phone. I sent what would go.

Witness Used Map Below to Describe Path of Objects: 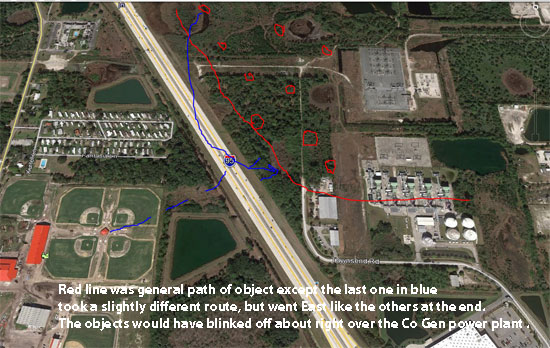 Witness Has Provided Information on Another Witness Who Saw Objects: William; Correction. I spoke to my friend at work again and she said she left burger king around 9:00 (she will look for receipt to make sure on the time).

She explained she saw the two orbs on the way home see map lower right is Burger King see Blue line for route home. Sighting was on Pine Street she was headed North and objects were to her Northwest. This is six miles away and approximately 50 minutes later. I would note exactly North-North west of the ones I saw that were initially heading South-Southeast. It is odd that her sighting would have fit nicely with the initial heading I saw on mine. My friend did not mention a heading of the two objects she saw. I think they were moving in a car and did not note a direction.

Map Showing Sighting Location of Second Sighting by Another Witness: 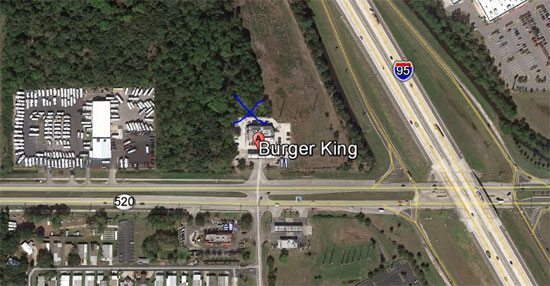