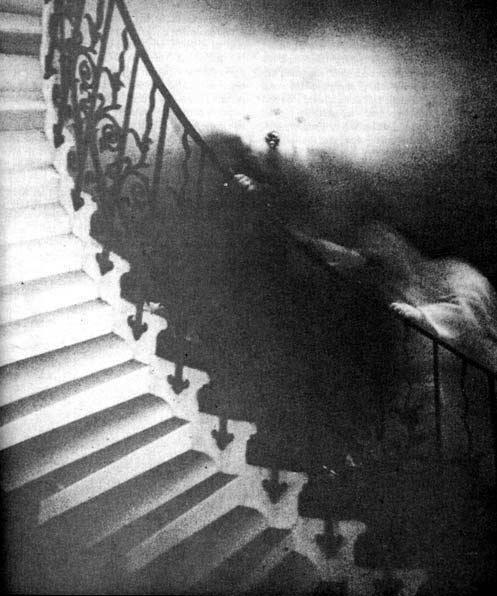 Rev. Ralph Hardy, a retired clergyman from White Rock, British Columbia, took this now-famous photograph in 1966. He intended merely to photograph the elegant spiral staircase (known as the “Tulip Staircase”) in the Queen’s House section of the National Maritime Museum in Greenwich, England. Upon development, however, the photo revealed a shrouded figure climbing the stairs, seeming to hold the railing with both hands. Experts, including some from Kodak, who examined the original negative concluded that it had not been tampered with. It’s been said that unexplained figures have been seen on occasion in the vicinity of the staircase, and unexplained footsteps have also been heard.

Interesting side note: This photo isn’t the only evidence of ghostly activity at the Queen’s House. The 400-year-old building is credited with several other apparitions and phantom footsteps even today. Recently, a Gallery Assistant was discussing a tea break with two colleagues when he saw one of the doors to the Bridge Room close by itself. At first he thought it was one of the lecturers. “Then I saw a woman glide across the balcony, and pass through the wall on the west balcony,” he said. “I couldn’t believe what I saw. I went very cold and the hair on my arms and my neck stood on end. We all dashed through to the Queen’s Presents Room and looked down towards the Queen’s Bedroom. Something passed through the ante-room and out through the wall. Then my colleagues all froze too. The lady was dressed in a white-grey colour crinoline type dress.”

Other ghostly goings-on include the unexplained choral chanting of children, the figure of a pale woman frantically mopping blood at the bottom of the Tulip Staircase (it’s said that 300 years ago a maid was thrown from the highest banister, plunging 50 feet to her death), slamming doors, and even tourists being pinched by unseen fingers.