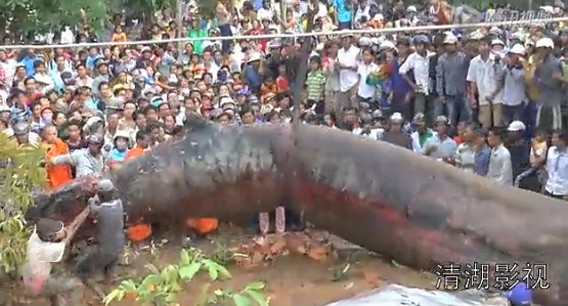 Did they find a monster in Vietnam?
Cryptozoology

Over the years, we’ve seen countless of videos and reports about nightmarish monsters getting spotted doing monster things. Like, for example, this dragon was spotted flying over England. Or thismermaid-like thing which was spotted in Spain. Or this 18-foot creature which was found off the shore of California.

But none of the above will prepare you for what’s been excavated in Vietnam recently. Take a look at the video below.

A Japanese website recently posted a video of what looks like the corpse of a monster being dug out from the ground in Vietnam. The two-minute long clip shows a giant, slug-like creature with a mean-looking head being hoisted onto a trailer as a huge throng of curious onlookers, well, looked on.

Of course, the main question here is: what exactly is this thing? Is it an overgrown worm? Is it a thousand year old underground monster? Or -gasp! – a science experiment gone wrong? Officials have released a statement saying that it’s a carcass of a whale, but we find it weird because as far as we know, whales prefer to hang out in the ocean, not on dry land.

What do you guys think? Monster or no monster? Sound off below.

Special thanks and credit for this story: Yahoo!