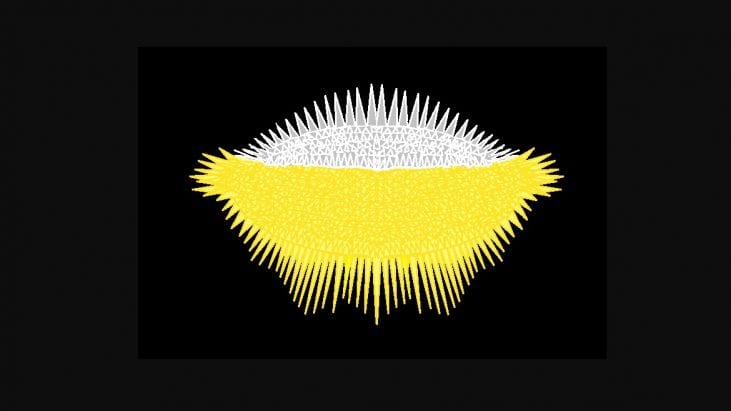 “I was driving West on I-90 at 75 MPH somewhere West of Mitchell, SD. The sky was clear and the moon almost full. About a mile ahead off to the right, I spotted 3 radio towers and began scrutinizing them waiting for the flashing red light required to alert small aircraft of their presence. After a few seconds (5 or less) I noticed a sudden bright yellowish light strobe on and off quickly (1/10 of a second duration or less; probably hundredths of a second). I quickly realized that it was not directly on top of the towers, but closer to me than were the towers.

I wondered why I didn’t see a red pulsating light, but rather this strobing topaz light. About 3 seconds after the first “flash”, it strobed again but was much closer, moving almost exactly opposite the direction I was travelling, but slightly angled towards the highway. About 3 seconds later, it flashed again. I very briefly looked at the highway to ensure I was pointed well in my lane then looked directly to my right through the passenger window of the full-size pick-up truck I was driving hoping that I would see it one more time before I passed it.

It flashed one more time with a light of incredibly intensity with “crystals” of brilliant light that were gem-like; topaz in color and luminosity on the bottom. The light on the top was also of a crystalline structure and brilliance, but was pure white. The white light was only the upper portion of the object and the “crystals” were shorter than the topaz ones that constituted most of the light phenomenon.

The structure was only observed as an emanation of light. It was not symmetric vertically, but appeared to have most of its mass on the bottom or larger half in a vertical sense. The upper part that was white did not extend to the front or back of the largest horizontal dimension; the direction of travel. It was only this last (4th) flash where it appeared closest to me that I could see that there were two different colors of light. There was no sound then or a sound wake that followed. Based on the distance travelled in the space of time required, it must have been travelling at least 150-300 mph if not a little more.

It wasn’t until after the last flash that I did the “math” in my head and realized that a small plane would have displayed a red light at the tip of the port wing and a green at the tip of the opposite/starboard wing. I lived less than a mile from a major airport for several years and observed many small aircraft and helicopters approach and depart at a close distance.

The phenomenon being reported here was unlike anything I’ve ever seen, heard described, or have seen in pictures, videos, or depicted in drawings. In just these immediate few seconds that followed the last flash, I realized that this was not something I know to be man-made; hence this report.”

The witness submitted the following sketch to further describe the object that he saw. There are seven airports within a 40 mile radius of the location of the sighting, and many more within a 100 mile radius. The simplest explanation is that this sighting was of an unusual aircraft operating out of one of these airports.

However, given the witness’s description of the object’s speed, lack of sound, unusual shape, lack of signal lights, and general odd appearance, the simple explanation does not fit the witness’s observation.

There have been a number of sightings in the Mitchell, SD area over the years reported in various UFO databases, so it does appear there is a lot of activity in the area.

Without further evidence to examine, this case is difficult to draw any conclusions from. It is documented here to compare with other cases in the region, and hopefully determine what may be going on in the area.