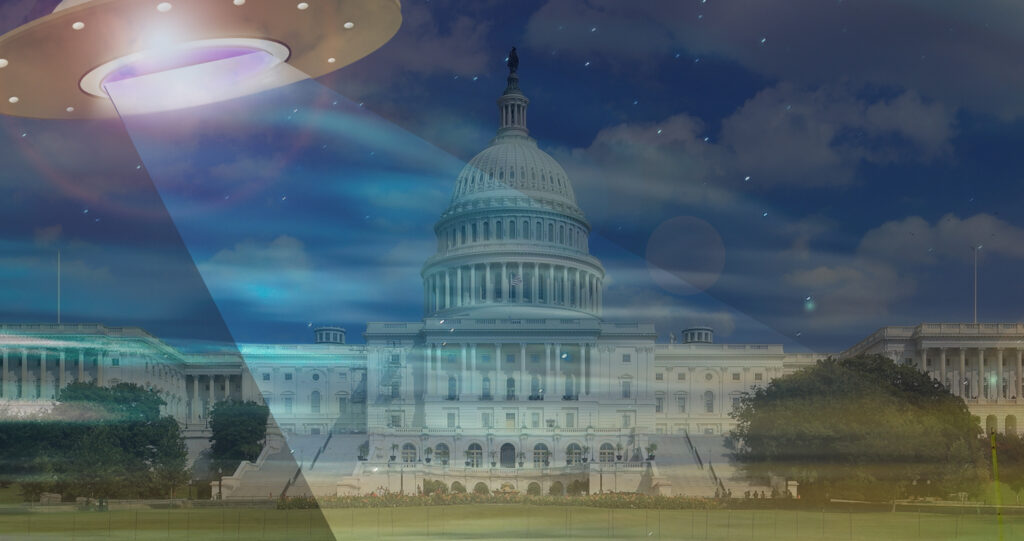 The Road to a Congressional UFO Hearing, 1960’s Style

The world is abuzz that the United States Senate, namely the Senate Select Committee on Intelligence chaired by Senator Marco Rubio, is interested in a public UFO report created by the Intelligence Community (IC). In addition, the Department of Defense (DOD) recently announced a UAP Task Force, or UAPTF, which aims to investigate unidentified objects as they encroach on military installations. The effort is an exciting push towards transparency related to an issue that has intrigued the masses for decades, and one that is often encapsulated in secrecy and conspiracy allegations. However, this is not the first time Congressional interest into UFOs has happened. In fact, it’s happened before in a nearly identical fashion. Can this unfolding saga end the same way? Advocates for UFO disclosure sure hope not.

Back in 1947, the U.S. military had begun the first first of a trifecta of UFO related research programs. Beginning with Project Sign, then Project Grudge, then ending with Project Blue Book in 1969, the trio of projects collectively investigated 12,618 UFO cases within the twenty-two years they operated, and found only 701 remained “unidentified.”

Although those statistics are wildly contested, and rightfully so, that did not stop then House Minority Leader representing the State of Michigan, Gerald Ford, from pressing for answers about the UFO phenomena.

On March 28, 1966, a letter was sent by Ford to the House Committees on Armed Services and Science and Astronautics. He highly recommended that either committee investigate UFOs and come up with answers.

“No doubt you have noted the recent flurry of newspaper stories about unidentified flying objects (UFO’s). I have taken a special interest in these accounts because many of the latest reported sightings have been in my home state of Michigan,” Ford opened his letter. He went on to state, “In the firm belief that the American public deserves a better explanation than that thus far given by the Air Force, I strongly recommend that there be a committee investigation of the UFO phenomena.”

Then, just days later on April 3, 1966, Ford issued a statement about the mockery he endured after pushing for UFO transparency, largely due to the stigma surrounding the issue.

“As I had expected, some persons have ridiculed my call for a congressional investigation of unidentified flying objects (UFO’s). These people are a fraction of those who have given me their reaction to my proposal,” Ford wrote. “Those who scoff at the idea of a congressional investigation of UFO’s apparently are unaware that the House Armed Services Committee has scheduled a closed-door hearing on the matter Tuesday…”

As Ford indicated in his statement, the House Committee on Armed Services took action just as he promised. The committee met on April 5, 1966, at 10:35 a.m. Present with the committee, was Dr. J. Allen Hynek, chief scientific consultant to Project Blue Book, along with Major Hector Quintanilla, the active chief officer for Project Blue Book. In addition, multiple statements, documents and newspaper articles were entered into the record, in addition to numerous UFO reports by police officers, military personnel and the letter referenced above written by Ford.

After hearing the testimony, and seeing the evidence from the result of more than 10,000 cases by the time the hearing took place, the committee concluded that a report needed to be generated. “It is the opinion of the committee that the present Air Force program dealing with UFO sightings has been well organized, although resources assigned to it (only one officer, a sergeant, and secretary) have been quite limited,” the committee concluded. They went on to recommend that the Air Force negotiate contracts to select universities to analyze the data with scientific teams, and to investigate any promising cases.

The report was to be made available to the public, as recommended by the committee. “The reports Project Blue Book should be given wide unsolicited circulation among prominent Members of the Congress and other public persons as a further aid to public understanding of the scientific approach being taken by the Air Force in attacking the UFO problem.”

Within weeks, Ford had achieved his goal of getting a report and scientific analysis of the UFO data available at the time. In an April 21, 1966, press release, Ford said, “The Air Force has informed me it is arranging for a study by high-caliber scientists of some of the UFO sightings which have never been explained. The report will definitely be made public, the Air Force has assured me.”

Ford also stated he would have preferred a full hearing with witnesses in front of the committee, but said that he felt this was a “step in the right direction” having a scientific analysis of the data.

On October 7, 1966, the Air Force released their press statement that the University of Colorado would conduct the independent study on UFOs. The director of that effort was Dr. Edward Condon, who’s name would help identify his committee and later the report they generated.

The Condon Committee evaluated the threat potential behind UFOs, and whether or not they were a national security threat.

For two years, they studied the evidence. And their conclusion was that there was no threat, nor was there a reason to continue UFO investigations. This entire effort resulted in the official close of Project Blue Book in the end of 1969 (and formally closed in January of 1970), and the Condon Report has been cited for decades as the reason UFOs were not taken seriously thereafter.

From Project Blue Book To AATIP

Is history repeating itself? Although still contested on whether the Advanced Aerospace Threat Identification Program (AATIP) was truly a “UFO Study” similar to Project Blue Book, let us assume for a moment it was, and it continues to this day disguised as the UAPTF.

– The studies conducted by AATIP reflect those done decades ago by Project Blue Book.

– The military witnesses from the 2004 USS Nimitz encounters; the 2015 USS Roosevelt encounters and others interviewed by the AATIP, reflect those military encounters that were brought up in the 1966 Congressional hearing on UFOs as investigated under Project Blue Book.

– The stigma surrounding the topic in the 1960s, which resulted in Ford receiving ridicule for pushing for a UFO hearing, echoes that of the “stigma” often referred to by Luis Elizondo, the man who says he led the AATIP effort from within the Pentagon.

– The 1966 enlistment of the University of Colorado, along with a scientific team to create a public report based on UFO data, is nearly identical to the unfolding saga that present day Congress is pushing for a public report from the IC.

So what next? Will the end to this unfolding saga conclude in the same way it did in the 1960s?

The efforts to achieve Congressional interest in the UFO topic should be commended and applauded. Decades have passed since such an achievement, and there is no taking away from the fact the general public wants to know the truth.

Yet, what many are forgetting, is the U.S. government has a history of not wanting to give that truth. At least, not all of it. This is evidenced by reams of still classified information on the UFO topic, which has yet to be fully revealed to the public. Despite current interest by Congress, they will heavily rely on the very institution that has spearheaded the secrecy surrounded UFOs: the IC itself.

So, will history repeat itself? Will a Condon Committee Report-like document be presented to Congress, that will then be utilized for decades to come on why there is NOT a reason to investigate UFOs or take them seriously?

Only time will tell on how this next chapter will play out, and whether the public report on UFOs will prove to be beneficial to the public understanding on the topic. Or, if history does repeat itself, it may just prove to be the next crutch for secrecy that will be utilized for the next 50 years, just like the last one was.