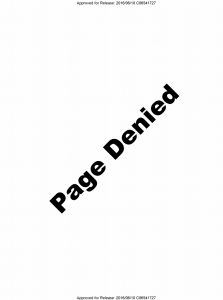 Originally, this record was released on the CIA FOIA Reading Room, wherein each and every page read, “PAGE DENIED”. Page after page, it looked like the page to the right.

In June of 2018, I filed a Mandatory Declassification Review (MDR) request for the record to be reviewed, since it was more than two years after the last one that resulted in each page being denied.

In March of 2019, I received the record, still in redacted form, but much was released. From the CIA letter, another requester received a copy released in August of 2018, which I found out was Jason Leopold – so kudos to him for getting this released.

There was no additional review on my request (since the August 2018 release is less than two years), but they gave me a copy of what was released. That is available below.

Summary and Reflection of Chief of Medical Services on the OMS Participation in the Detention and Interrogation Program [90 Pages, 51.8MB]