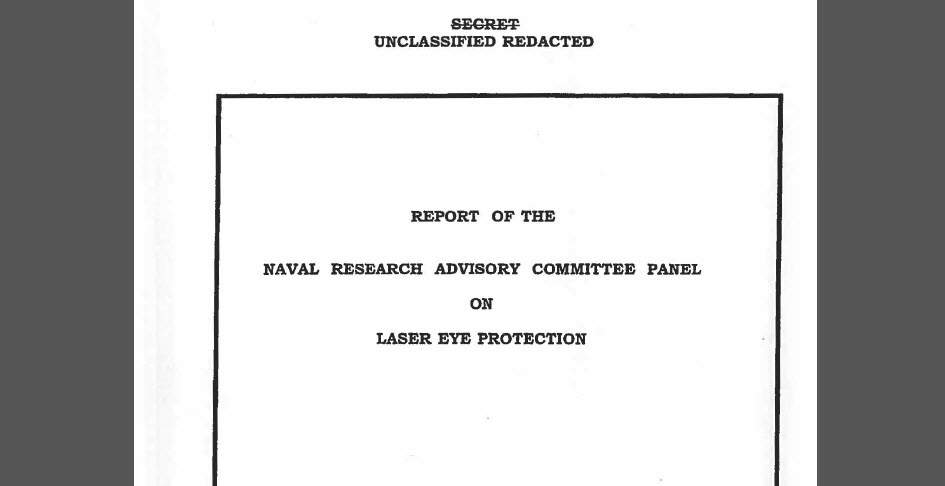 The Naval Research Advisory Committee (NRAC) Panel was requested to undertake a rapid review of the laser threat to Navy and Marine Corps aviation to reassess the threat, the adequacy of Operational Requirements (OR) to develop means to protect against it, to review present Navy protection programs
and the Research and Development (R&D) organization, and to make recommendations for broader R&D leading to the development of protection against the emerging frequency agile threat.

There are a variety of friendly and hostile lasers currently developed by military forces in the form of laser range finders and designators. Some of the Soviet lasers may have power levels unwarranted by range finder or designator applications, but it is not known whether these are intended as anti-personnel weapons. Laser radiation has been experienced by u.s. flight crews flying reconnaissance missions. While there are several different damage mechanisms (discussed in this report), present lasers can cause eye damage at ranges up to a few miles. However, they can cause a •dazzle• effect at greater ranges (particularly at night) when illumination of a cockpit and the scattering of light results in the inability of the crew to perform its mission and can result in the loss of the aircraft. The panel concluded that the laser threat is growing and whether intentionally used as anti-personnel weapons or causing damage only accidentally, lasers must be considered a growing anti-personnel threat against which protection should be provided. The naval aviators most exposed to this threat are the air-to-surface attack aircraft and the Marine aircraft and helicopter crews supporting ground combat.

The document below was listed as classified on the Navy’s website, so in July of 2017, I filed a Mandatory Declassification Review (MDR) request to get it declassified, and in September of 2017, the record was released.