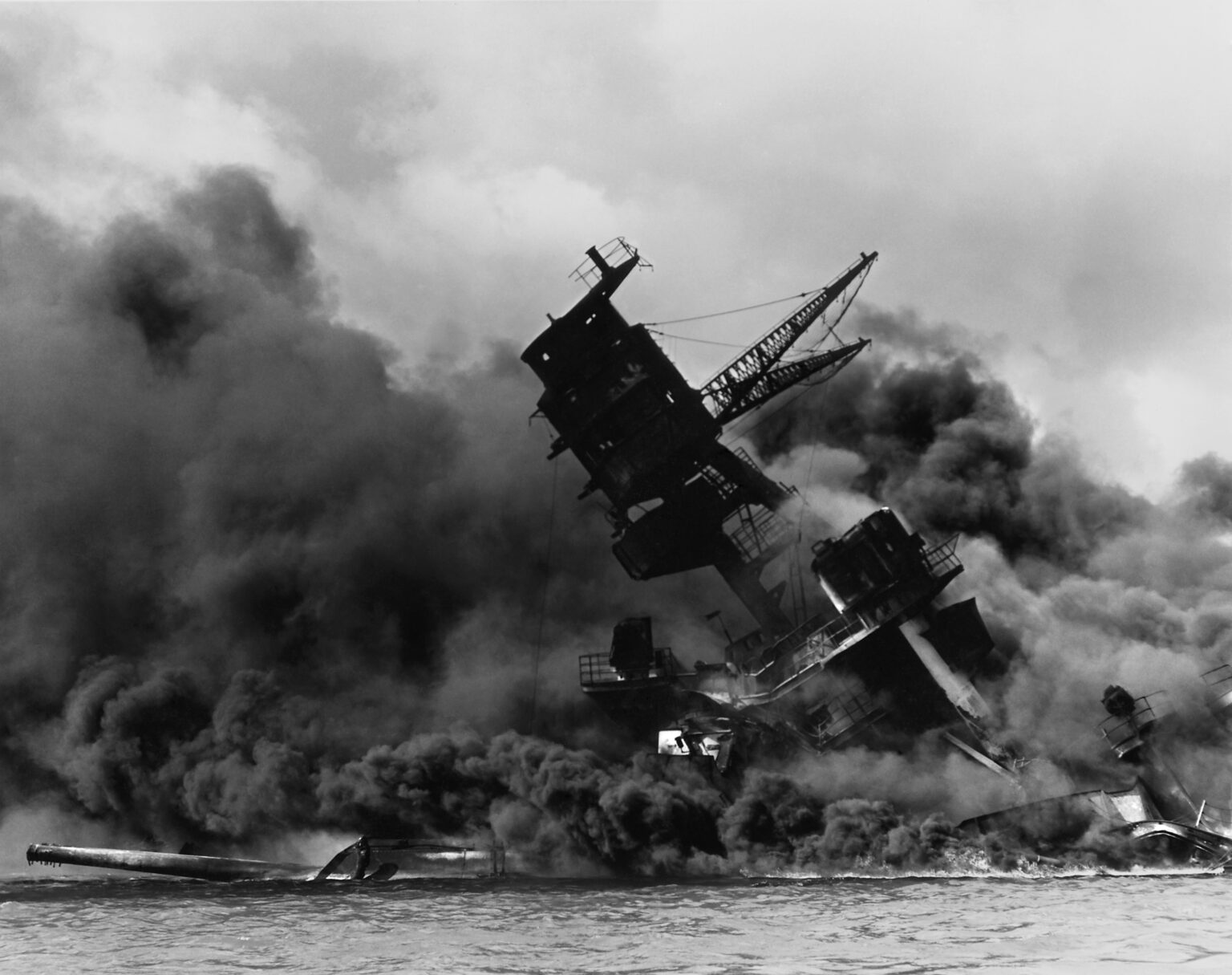 Aircraft and midget submarines of the Imperial Japanese Navy began a surprise attack on the U.S. under the command of Admiral Isoroku Yamamoto.

Despite long-standing assertions that this attack could have been predicted and prevented by the United States Military, the U.S. forces at Pearl Harbor appeared to be utterly unprepared, and the attack was devastating in loss of life and damage to the U.S. fleet. At 6:05 a.m. on December 7, the six Japanese carriers launched a first wave of 183 planes composed mainly of dive bombers, horizontal bombers and fighters.

The Dorn Report: ADVANCEMENT OF REAR ADMIRAL KIMMEL AND MAJOR GENERAL SHORT ON THE RETIRED LIST, Office of the Under Secretary of Defense for Personnel and Readiness, December 1, 1995 [45 Pages, 26.4MB] – Excerpt: This review was undertaken in response to a commitment that former Deputy secretary Deutch made to Senator Thurmond in April 1995. You assigned me to conduct it. In essence, you asked me to advise you whether actions taken toward General short and Admiral Kimmel some 50 years ago were excessively harsh, and if so, whether posthumous advancement to three- and four-star rank is the appropriate remedy.

On February 21, 1942, just 76 days after the tragic attack on Pearl Harbor, Bernard Julius Otto Kuehn (pictured) was found guilty of spying and sentenced to be shot “by musketry” in Honolulu. What was a German national doing in Hawaii in the days leading up to the attack? What exactly did Kuehn do to warrant such a sentence? Here’s the story…

Bed sheets on clothes lines. Lights in dormer windows. Car headlights. A boat with a star on its sail.

Otto Kuehn had a complex system of signals all worked out. A light shining in the dormer window of his Oahu house from 9 to 10 p.m., for example, meant that U.S. aircraft carriers had sailed. A linen sheet hanging on a clothes line at his home on Lanikai beach between 10 and 11 a.m. meant the battle force had left the harbor. There were eight codes in all, used in varying combinations with the different signals.

In November 1941, Kuehn had offered to sell intelligence on U.S. warships in Hawaiian waters to the Japanese consulate in Hawaii. On December 2, he provided specific—and highly accurate—details on the fleet in writing. That same day, he gave the consulate the set of signals that could be picked up by nearby Japanese subs.

Kuehn—a member of the Nazi party—had arrived in Hawaii in 1935. By 1939, the Bureau was suspicious of him. He had questionable contacts with the Germans and Japanese. He’d lavishly entertained U.S. military officials and expressed interest in their work. He had two houses in Hawaii, lots of dough, but no real job. Investigations by the Bureau and the Army, though, never turned up definite proof of his spying.

Not until the fateful attack of December 7, 1941. Honolulu Special Agent in Charge Robert Shivers immediately began coordinating homeland security in Hawaii and tasked local police with guarding the Japanese consulate. They found its officials trying to burn reams of paper. These documents—once decoded—included a set of signals for U.S. fleet movements.

All fingers pointed at Kuehn. He had the dormer window, the sailboat, and big bank accounts. Kuehn was arrested the next day and confessed, though he denied ever sending coded signals. His sentence was commuted—50 years of hard labor instead of death “by musketry”—and he was later deported.

Today, his story reminds us how much damage espionage can do to our country. And why the FBI continues to rank counterintelligence as a top investigative priority.