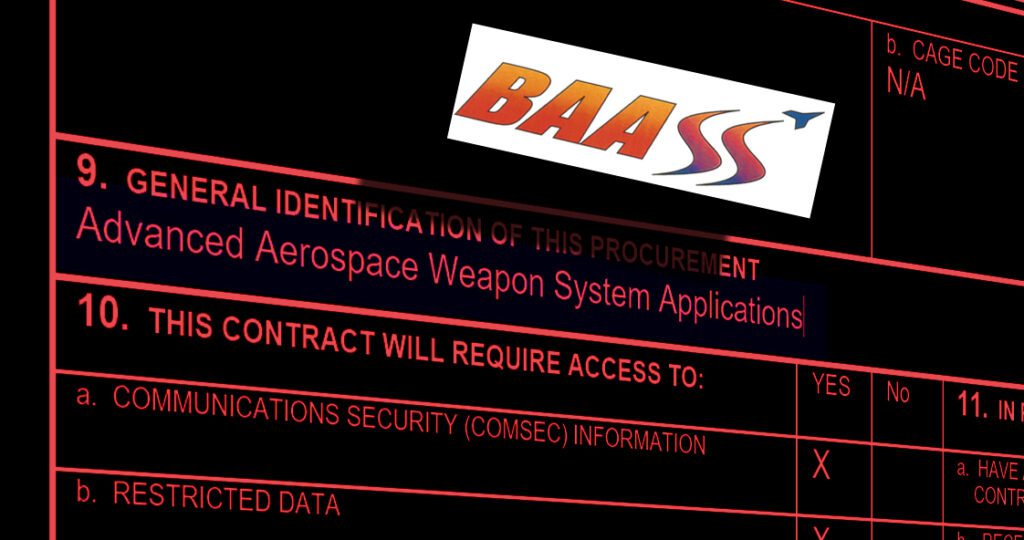 In an effort to get the true objective of the alleged “UFO Program” operated from 2008-2010 by the Defense Intelligence Agency (DIA), contracted out to Bigelow Aerospace Advanced Space Studies (BAASS), a specific  Freedom of Information Act (FOIA) request was filed by The Black Vault in May of 2018 (case #FOIA-0260-2018). The final determination of that case has cultivated even more confusion and has generated even more questions about the entire narrative that has circulated for nearly four years.

Although originally reported as the Advanced Aerospace Threat Identification Program (AATIP) by the NY Times in December of 2017, it was later learned the origin of the project was actually the Advanced Aerospace Weapon System Applications Program (AAWSAP). It ran from at least 2008-2010 at the DIA and run by the contracted BAASS subsidiary of Bigelow Aerospace where it was later transferred to the Pentagon and operated under a different name, with a different director.

At least, that’s how some of the stories go.

According to the Pentagon, there is a long history of statements that have denied that AAWSAP, nor AATIP, were UFO programs. They later expanded to say the program, “…allowed for research drawn from a wide variety of sources, including reports of UAPs,” but they maintain, “…the examination of UAP observations was not the purpose of AATIP.”

According to those connected to the program, which include Dr. Lacatski, Luis Elizondo, Dr. Hal Puthoff and even former Senator Harry Reid; they all contend UFOs were absolutely the primary focus of each.

Most of the official documentation has yet to be released which could confirm the various accounts that have circulated in the mainstream media and various blogs or podcasts for years. The Black Vault has numerous, still open, FOIA cases aimed to get each and every one of the documents relating to AAWSAP and AATIP out to the public. But issues in the legal process of doing so arise when many of those involved in the program(s) whether from the government-side or contractor-side, often contradict each other and have varying versions of the same story. And a new book co-authored by the AAWSAP director James Lacatski, only offers more questions than produces answers when attempting to fully understand these program(s). This all makes it very difficult to formulate FOIA requests and appeals, or ask for specific documents and details, because you need to essentially pick which version is accurate, omit the rest, and sometimes wait years for something to come in (or not come in). Filing numerous cases that are similar in nature but that differ with “facts” and specific details, is actually more problematic than helpful to “cover all the bases.”

When the name AAWSAP was revealed in 2018, The Black Vault’s FOIA request aimed to get, “… all documents pertaining to the outline, mission statement, objectives, etc.” of the AAWSAP and AATIP program(s). One example of the varying versions of the same story as cited above reveals itself during this specific case. Some contend that AAWSAP and AATIP were the same program with AATIP only being a “nickname” for AAWSAP. Others say they are entirely different programs and not the same. So to remedy that, the request was formulated to utilize all the varying versions of the names spelled out exactly, separated them in the request where they could be two different programs (or one being a nickname for the other) which resulted in the DIA having no doubt about what the request was seeking. This instance had a fix used within the request with how it was written, but sometimes, that is not always possible when filing other cases.

It took the DIA more than three years to say that AATIP, nor AAWSAP, had any mission statement, objective, or outline that they could find. Normally, any contracted program would have at least one to ensure that the agreed contracted amount would be spent on what the agency wanted. In turn, the “deliverables” also would be what the DIA desired based on any mission statement of objectives.

It seems odd that none of the requested documentation would exist given the fact that a “Statement of Objectives” for the AAWSAP program was produced before it was ever awarded to BAASS or even posted publicly. Certainly, those objectives would continue to be modified once the contract was awarded and fine-tuned as the program went underway, but they should exist none-the-less. In fact, that “Statement of Objectives” has been published on the internet for more than a decade since the original bid solicitation notice was posted by the DIA, and that record in itself should have been responsive to The Black Vault’s request.

But according to the DIA, none of the requested material was found, and The Black Vault’s request was denied with a “no records” response.

An appeal has been filed based on the above facts.

The results of that appeal will be published, when available. It is unclear why the DIA would have no responsive records, but answers may be given when the appeal process is completed.

Until then, we can tack on these questions and likely more as this all continues to unfold…

Note: “Advanced Aviation Threat Identification Program” was used in the original request, because in early 2018, the U.S. government and the Pentagon was using that as the program name. Since then, The Black Vault got the official statement in February of 2019 that it was the “Advanced Aerospace Threat Identification Program” while at the DIA. Given the broad scope of the request, some may think this wording would produce the “no records” response, however, you can see by paragraph three below, the DIA knew exactly the program that was being referenced.