Since December of 2017, the Advanced Aerospace Threat Identification Program, or AATIP, has long been touted as a “Secret Pentagon UFO Study” which lasted from 2008 – 2012. However, that has not always been the case to the Pentagon. In a series of conflicting and confusing statements since 2017, the official position of the Department of Defense (DoD) has gone from confirming it was a UFO program, to saying no it was not, to now saying it still was not a UFO program, but it did utilize UFO (or Unidentified Aerial Phenomena / UAP) reports during its research stages. 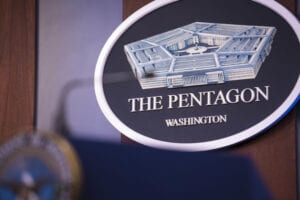 Confused much? It seems that may be by design. So, lets break it all down.

To do that, the Pentagon has made that effort a little easier. Yesterday, they released to The Black Vault, along with Roger Glassel and an unknown number of journalists and media outlets, a consolidated statement of all information released about AATIP to date. Although much of the information has been released before at various stages throughout the past few years, one section appears to be a new revelation which seems to contradict their previous stance on the matter.

To ensure accuracy, and to give you all the full story, here is the entire statement released by Pentagon spokesperson Susan Gough, and published in full:

The purpose of the Advanced Aerospace Threat Identification Program (AATIP) was to investigate foreign advanced aerospace weapon system applications, with future technology projections over the next 40 years, and to create a center of expertise for advanced aerospace technologies. The goal was to help understand the threat posed by unconventional or leap-ahead aerospace vehicles and technologies that could have national security implications for the United States.

The contract goal was to study 12 technical areas: lift, propulsion, control, armament, signatures reduction, materials, configuration, power generation, temporal translation, human effects, human interface, and technology integration.  The contractor identified and worked with academics and scientists to produce technical reports.  In developing the reports and exploring how to create a “center of expertise,” the contract allowed for research drawn from a wide variety of sources, including reports of UAPs.  However, the examination of UAP observations was not the purpose of AATIP.

The first 26 reports were completed by late 2009. The Defense Appropriations Act for FY2010 included an additional $12 million for the program, and 12 additional reports were produced. A total of 38 technical reports were delivered.  The list is below.  All of the reports are either classified or marked For Official Use Only.  Only a few have been released to the public.

After a review in late 2009, it was determined that the reports were of limited value to DIA.  The department terminated AATIP when funding for the program ended in 2012.

The UAPTF is not a continuation of AATIP.  Since the majority of reporting about UAP observations in recent years came from naval aviators, the Department of the Navy had been leading assessments of UAP incursions into DOD training ranges and designated airspace since approximately 2018.  Beginning in 2019, DOD undertook efforts to formalize the good work done by the Navy for DOD.  Former Deputy Secretary Norquist approved the establishment of the UAPTF on Aug. 4, 2020.

Now, the key part out of the above, is this:

“In developing the reports and exploring how to create a ‘center of expertise,’ the contract allowed for research drawn from a wide variety of sources, including reports of UAPs.  However, the examination of UAP observations was not the purpose of AATIP.”

Although still not confirming AATIP was a UFO program, they seem to have changed their tune on whether or not AATIP dealt with UFOs/UAPs at all. They stated that the “examination” of the UAPs was not the purpose of AATIP. Ergo, they did not “investigate” them.

After three years of confusion by the Pentagon, it is unclear why an unclassified program (albeit with classified elements) is so hard to fully understand. In addition to that, former Senate majority leader Harry Reid stated to New York Magazine back in 2018 that “80 percent” of material related to AATIP was “public.” However, it remains unknown what the “80 percent” consists of, amounts to, or pertains to, nor is there any evidence this material would help clarify the Pentagon’s ever changing stances on what AATIP was all about. Numerous attempts by The Black Vault to clarify with Reid about this issue have all remained unanswered.