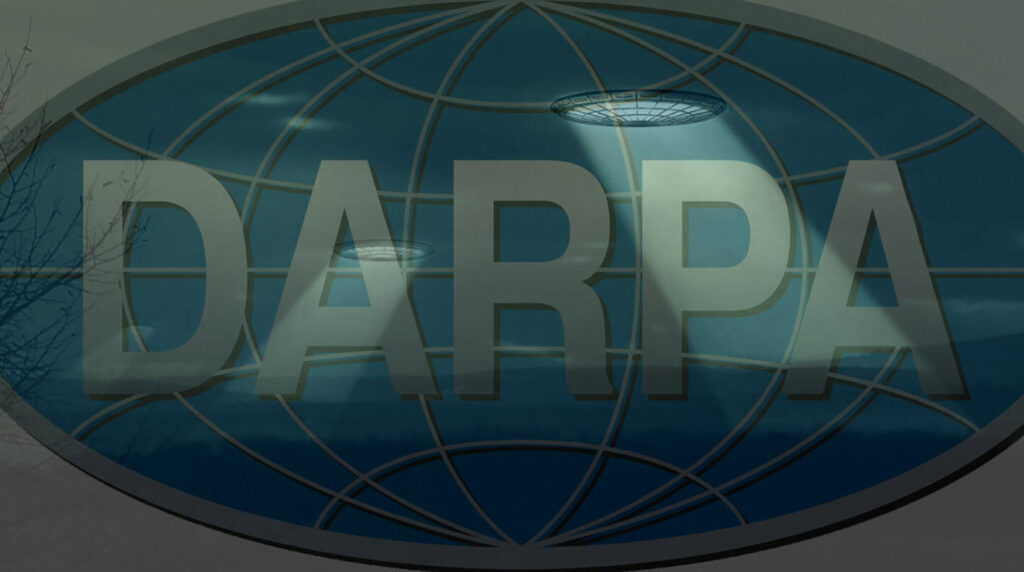 Could This Be DARPA’s Project for UFO/UAP Research?

There is nothing more mind numbing than sifting through hundreds of pages of defense related budgets. Line item after line item of program element numbers, dollar amounts and vague descriptions are only part of the headache. When searching for something specific, in a sea of nondescript references, it’s like seeking out one unique needle in a stack of needles.  If you set out to find what may be defense funding for Unidentified Aerial Phenomena (UAP) research? You’ll go cross-eyed within hours.  However, that was what The Black Vault set out to do; and the search may just have paid off.

For those readers who follow news about the Pentagon’s UFO research program, you’ll know that Uncle Sam has recently flip flopped on the issue. First stating they investigated unidentified flying objects with a secret program touted by many media outlets; they later recanted that by updating their previous statement and denying they ever did such a thing.

Confusion has reigned about what the Advanced Aerospace Threat Identification Program (AATIP) really was. Those involved in the effort, like Mr. Luis Elizondo, former Pentagon senior ranking person within the program, states unequivocally it was a UFO research program. The Pentagon, however, denies that fact, and told The Black Vault in December of 2019 that they were taking back their admission to researching UFOs, and said AATIP had nothing to do with them.

Let’s assume for a moment the Pentagon has continued their long-standing tradition of some mis-truths on the topic, and AATIP did deal with UFOs. What we do know, is that according to the NY Times, $22 million dollars that funded the program went to a subsidiary of Bigelow Aerospace known as Bigelow Aerospace Advanced Space Studies or BAASS, and would last from 2007-2012.

The Freedom of Information Act (FOIA) would reveal that thirty-eight reports known as Defense Intelligence Reference Documents (DIRDs) were produced under AATIP. In January of 2018, Senator John McCain’s office received a list of those report titles, after the Senator expressed interest in knowing what the program had produced.

To add to the concoction of confusion already surrounding AATIP, none of the DIRDs really seemed to reference anything UFO related. In addition, the DIRD reports that did leak out in full, did not mention AATIP, but rather, something called the Advanced Aerospace Weapon System Applications (AAWSA) Program.

In the letter to Senator McCain, from the Defense Intelligence Agency (DIA) that oversaw the program, “’The purpose of AATIP was to investigate foreign advanced aerospace weapon threats from the present out to the next 40 years.”

Pentagon spokesperson Susan Gough reiterated this in a statement to The Black Vault in 2019. “The purpose of AATIP was to investigate foreign advanced aerospace weapons system applications with future technology projections over the next 40 years, and to create a center of expertise on advanced aerospace technologies.”

Despite the contradiction, Elizondo told The Black Vault the Pentagon’s stance and their statements are wrong. “I believe enough people in our Government have been made aware over the last 2 years that a program existed and continues to exist…”

With these assertions, The Black Vault set out to find exactly where that money may be coming from that allows the program and the effort to continue. In order to do that, we must first go after what was publicly posted for the AAWSA Program. That can be found archived from a 2008 “Federal Business Opportunities” posting which was saved in the “Wayback Machine.” This was the original posting that was seen by BAASS in 2008, which they submitted a bid for. No other corporations offered a bid.

This solicitation notice stated the objective of the AAWSA program:

“One aspect of the future threat environment involves advanced aerospace weapon system applications.  The objective of this program is to understand the physics and engineering of these applications as they apply to the foreign threat out to the far term, i.e., from now through the year 2050. Primary focus is on breakthrough technologies and applications that create discontinuities in currently evolving technology trends. The focus is not on extrapolations of current aerospace technology. The proposal shall describe a technical approach which discusses how the breakthrough technologies and applications listed below would be studied and include proposed key personnel that have experience in those areas. 3. REQUIREMENTS: a) The contractor shall complete advanced aerospace weapon system technical studies in the following areas:   1. lift; 2. propulsion ; 3. control; 4. power generation; 5. spatial/temporal translation; 6. materials; 7. configuration, structure; 8. signature reduction (optical, infrared, radiofrequency, acoustic); 9. human interface; 10. human effects; 11. armament (RF and DEW); 12. other peripheral areas in support of (1-11); b) It is expected that numerous experts with extensive experience (minimum of 10 years) in breakthrough aerospace research and development will be required to meet the demands of the above program.”

With this as a starting point, The Black Vault began sifting through budgets and proposals to seek out what may be continuing this alleged UAP/UFO research. Regardless on if the AAWSA Program language was coded and covertly meant to be a “secret UFO study;” or if possibly it was not meant to be a UFO program at all but research bore out there was a phenomena that was determined a threat – this was a good place to start to seek out similar programs. Match the language – quite possibly match the objective.

After a long hunt, the discovery of Program Element (PE) 0603286E was made, and one of the projects within, could be exactly the unique needle in that proverbial stack of needles that was being sought after.

A PE is ultimately a portfolio of programs or in some instances a single program that receives funding within a budget.  PE 0603286E was first discovered in the 2008 DARPA Fact File published in June of 2008 (coincidentally, the same year the DIA solicited the private sector for bids for the AAWSA Program).

However, one sub-program within PE 0603286E is the Advanced Aerospace System Concepts line item, also reference as part of a “Project AIR-01.” The 2008 fact file says that:

“Studies conducted under the Advanced Aerospace System Concepts program will examine and evaluate emerging aerospace technologies and system concepts for applicability to military use, as well as the degree and scope of potential impact/improvements to military operations, mission utility, and warfighter capability. The program also analyzes emerging aerospace threats and possible methods and technologies to counter them.”

Although similar, the wording is not quite an exact match to the AAWSA Program, that is, not until you follow the progression of the program throughout multiple budgets. As the years progressed, the Advanced Aerospace System Concepts program continued to receive funding totaling millions of dollars each year, and it appeared that it’s objective and scope, would be slightly altered as time went on. The following was language that is found in later budgets about the program:

“The feasibility of achieving potential improvements, in terms of resources, schedule, and technological risk, is also evaluated. The results from these studies are used, in part, to formulate future programs or refocus ongoing work. Topics of consideration include: methods of defeating enemy anti-aircraft attacks; munition technologies to increase precision, range, endurance, and lethality of weapons for a variety of mission sets; novel launch systems; air vehicle control, power, propulsion, materials, and architectures; and payload and cargo handling systems.”

Launch systems; control; power; propulsion; materials; all exact research angles that connect the AAWSA Program / AATIP with this specific DARPA research program. In addition, having it in what appears to be an umbrella “weapons program,” along with using the phrasing “aerospace threats,” which would undoubtedly include UAPs, also draw a direct line between the two efforts.

Although it may be a stretch to fully conclude this is a continuation or extension of AATIP’s UAP focus; no one can deny the striking similarities between the wording of both programs. If AATIP / AAWSA Program was truly a UFO research program hidden within coded language in a public bid solicitation notice; then this DARPA program may ultimately be a near mirror image of it that holds many secrets of its own.

Note: The Black Vault has had numerous FOIA requests open for records related to the above PE line item. It has been challenging, but some headway has recently been made. It was decided to publish the above prior to the FOIA releases for additional information, in order to spread the word about the possible connect. More information will be published, when available.

In the past few days, the DOD issued their newest Department of Defense Fiscal Year (FY) 2021 Budget Estimates. The “Advanced Aerospace System Concepts” program is continuing, with millions of dollars slated for the coming years.

In addition, it still speaks of analyzing “emerging aerospace threats” along with pursuing topics such as novel launch systems, propulsion, and materials very similar to the AAWSAP language. It’s still unclear if there could be ANY connection whatsoever, but the similarities remain. 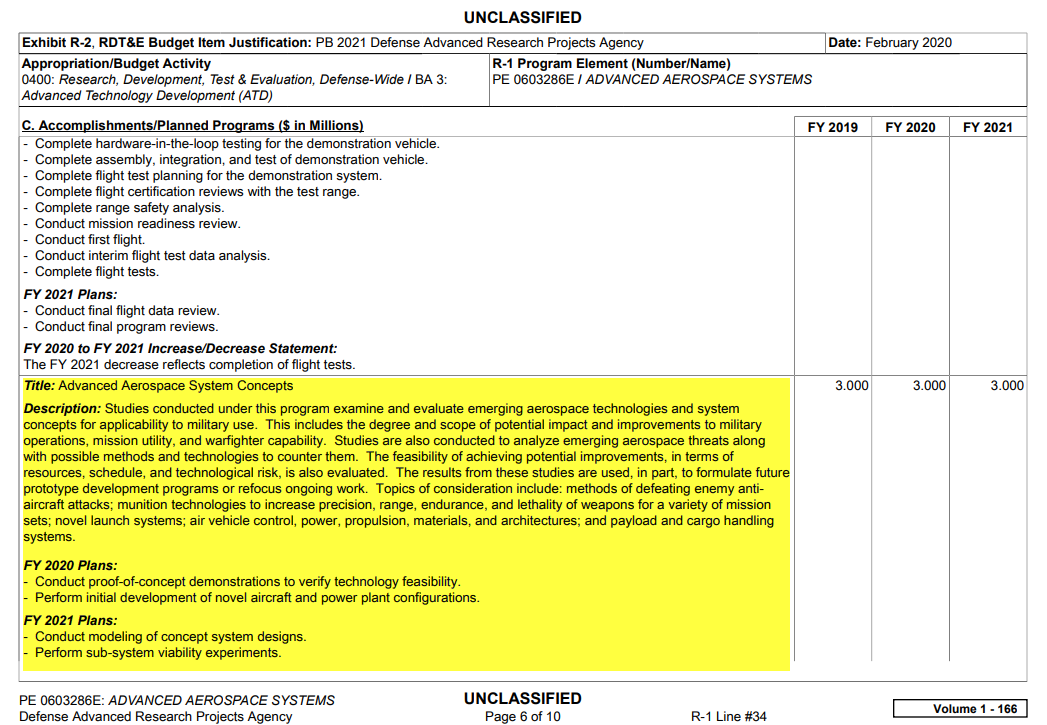