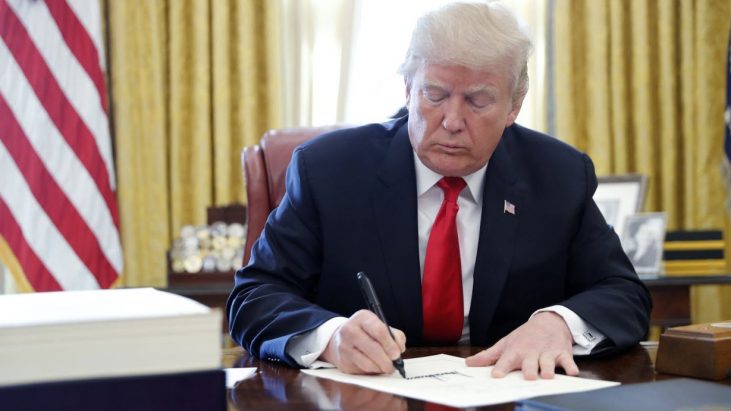 Everyone was hopeful that this meant the end to the secrecy behind the assassination of President John F. Kennedy.

However, on April 26, 2018, despite his promise — President Trump signed the below memorandum for the heads of various Executive Departments and Agencies.  In short, it authorized agencies to continue to withhold information, and President Trump also extended the release of additional information for another 3 1/2 years – October 26, 2021.

Although he demands review of the information, and for it to be released if it no longer warrants withholding, his action authorizes agencies to continue to redact and refuse to release the information he promised in October of 2017.

One can only assume, based on his tweet above, “Subject to the receipt of further information…” what “further information” President Trump received to extend his deadline, and authorize the redactions to hold.

President Trump’s memorandum can be read below and the JFK Assassination Document Collection can be found here:

MEMORANDUM FOR THE HEADS OF EXECUTIVE DEPARTMENTS AND AGENCIES

As I explained in my temporary certification of October 26, 2017, the American people expect their Government to provide as much access as possible to the President John F. Kennedy Assassination Records (records) so that they may — as they deserve — finally be fully informed about all aspects of this pivotal event.  Over the past 180 days, executive departments and agencies (agencies) have reviewed all of the information within records temporarily withheld from release and have proposed to the Archivist of the United States (Archivist) that certain information should continue to be redacted because of identifiable national security, law enforcement, and foreign affairs concerns.  The Archivist has reviewed the information agencies proposed to withhold and believes the proposals are consistent with the standard of section 5(g)(2)(D) of the President John F. Kennedy Assassination Records Collection Act of 1992 (44 U.S.C. 2107 note) (the “Act”).

I agree with the Archivist’s recommendation that the continued withholdings are necessary to protect against identifiable harm to national security, law enforcement, or foreign affairs that is of such gravity that it outweighs the public interest in immediate disclosure.  I am also ordering agencies to re-review each of those redactions over the next 3 years.  At any time during that review period, and no later than the end of that period, agencies shall disclose information that no longer warrants continued withholding.

Accordingly, by the authority vested in me as President and Commander in Chief by the Constitution and the laws of the United States of America, I hereby certify that all information within records that agencies have proposed for continued postponement under section 5(g)(2)(D) of the Act shall be withheld from full public disclosure until no later than October 26, 2021.

Any agency that seeks further postponement beyond this certification shall take note of the findings of the Act, which state, among other things, that “only in the rarest cases is there any legitimate need for continued protection of such records.”  The need for continued protection can only grow weaker with the passage of time from this congressional finding.  Any agency that seeks further postponement beyond October 26, 2021, shall, no later than April 26, 2021, identify to the Archivist the specific basis for concluding that records (or portions of records) satisfy the standard for continued postponement under section 5(g)(2)(D) of the Act.  Thereafter, the Archivist shall recommend to the President, no later than September 26, 2021, whether continued withholding from public disclosure of the identified records is warranted after October 26, 2021.

The Archivist is hereby authorized and directed to publish this memorandum in the Federal Register.

IRS Spoof Video of Donald Trump and ‘The Apprentice’