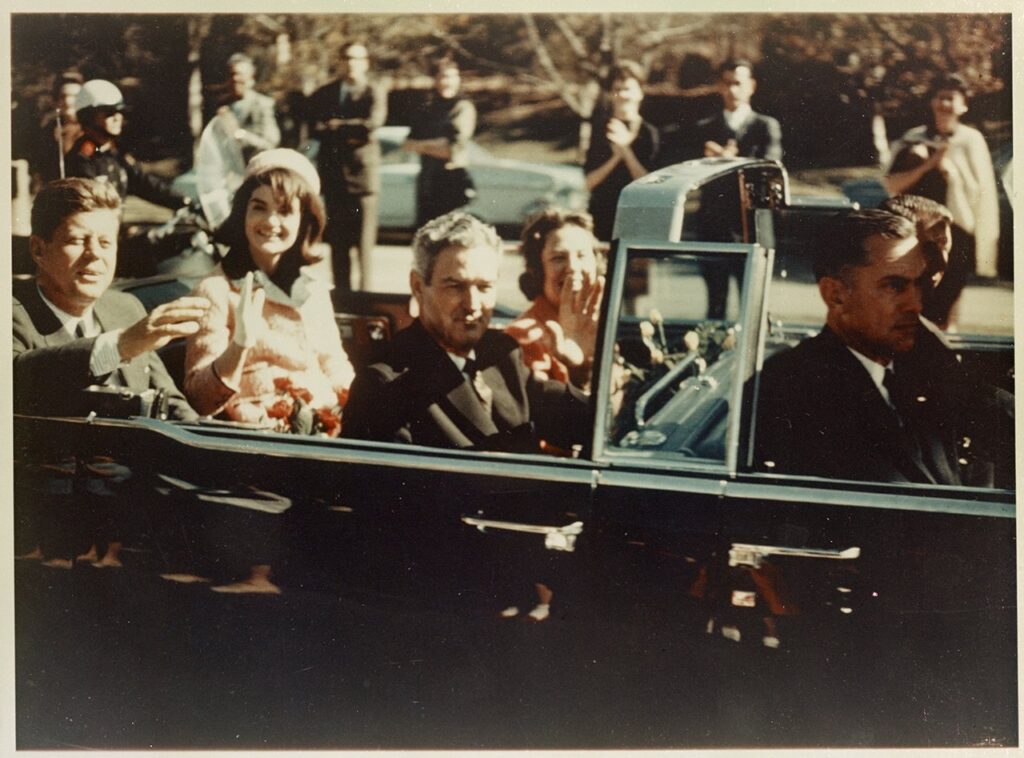 John F. Kennedy, the 35th President of the United States, was assassinated on Friday, November 22, 1963 at 12:30 p.m. Central Standard Time in Dallas, Texas while riding in a motorcade in Dealey Plaza.

Kennedy was allegedly fatally shot by a former U.S Marine, Lee Harvey Oswald, while he was riding with his wife, Jacqueline, Texas Governor John Connally, and Connally’s wife, Nellie, in a presidential motorcade.

A ten-month investigation by the Warren Commission from November 1963 to September 1964 concluded that Oswald acted alone in shooting Kennedy, and that Jack Ruby also acted alone when he killed Oswald before he could stand trial. Kennedy’s death marked the fourth (following Lincoln, Garfield, and McKinley) and most recent assassination of an American President. Vice President Lyndon B. Johnson became President upon Kennedy’s death.

The entire collection of all records released on the JFK Assassination, previously withheld, have been compiled below. Despite the files originally being released in a non-searchable format in most cases, The Black Vault converted 100% of the files to a searchable format.  In addition, The Black Vault created numerous index files of the entire collection, with clickable links to download the files.  These can also be downloaded below.

The MOU about the JFK Act

In June of 2021, NARA released to The Black Vault all drafts of the, “Memorandum of Understanding Regarding Continuing Obligations of the CIA Under the JFK Act.”

All drafts of the MOU [15 Pages, 6.2MB] – This PDF contains all draft copies of the memorandum of 1998 in Box 4 of the Files of K, Michelle Combs in a folder labeled CIA Compliance.

Each of the indexes below have clickable direct links for the files. Or, keep scrolling, and you will find links to browse the entire collection via a directory.

CLICK HERE FOR A COMPLETE INDEX OF DOCUMENTS
RELEASED in 2021 [0.2MB]

CLICK HERE FOR A COMPLETE INDEX OF DOCUMENTS
RELEASED in 2022 [1.8MB]

The links in this section will take you to a full file listing for individual downloads of the .pdf files. If you prefer .zip files instead, scroll down for a list breakdown of .zip files available.

Or for a smaller, segmented download (but is not searchable) I have left the following .zip files available for download:

Final Report of the Select Committee on Assassinations US House of Representatives, January 2, 1979 [716 Pages, 43.27MB]

From Bright Ideas to Social Research: The Studies of the Kennedy Assassination, May 1965 [38 Pages, 1 MB]

Report of the Assassination Records Review Board

The President John F. Kennedy Assassination Records Collection Act of 1992 created the Assassination Records Review Board as an independent agency to re-examine for release the assassination-related records that federal agencies still regarded as too sensitive to open to the public. The Board finished its work on September 30, 1998, issued a final report, and transferred all of its records to the National Archives and Records Administration.

The President’s Commission on the Assassination of President Kennedy, known unofficially as the Warren Commission, was established by President Lyndon B. Johnson on November 29, 1963 to investigate the assassination of United States President John F. Kennedy that had taken place on November 22, 1963. Its 889-page final report was presented to President Johnson on September 24, 1964 and made public three days later. It concluded that Lee Harvey Oswald acted alone in killing Kennedy and wounding Texas Governor John Connally and that Jack Ruby also acted alone when he killed Oswald two days later. The Commission’s findings have proven controversial and have been both challenged and supported by later studies.

The Commission took its unofficial name—the Warren Commission—from its chairman, Chief Justice Earl Warren. According to published transcripts of Johnson’s presidential phone conversations, some major officials were opposed to forming such a commission and several commission members took part only with extreme reluctance. One of their chief reservations was that a commission would ultimately create more controversy than consensus, and those fears proved valid. (Source: Wikipedia)

On Watch: Profiles from the National Security Agency’s Past 40 Years, 1984