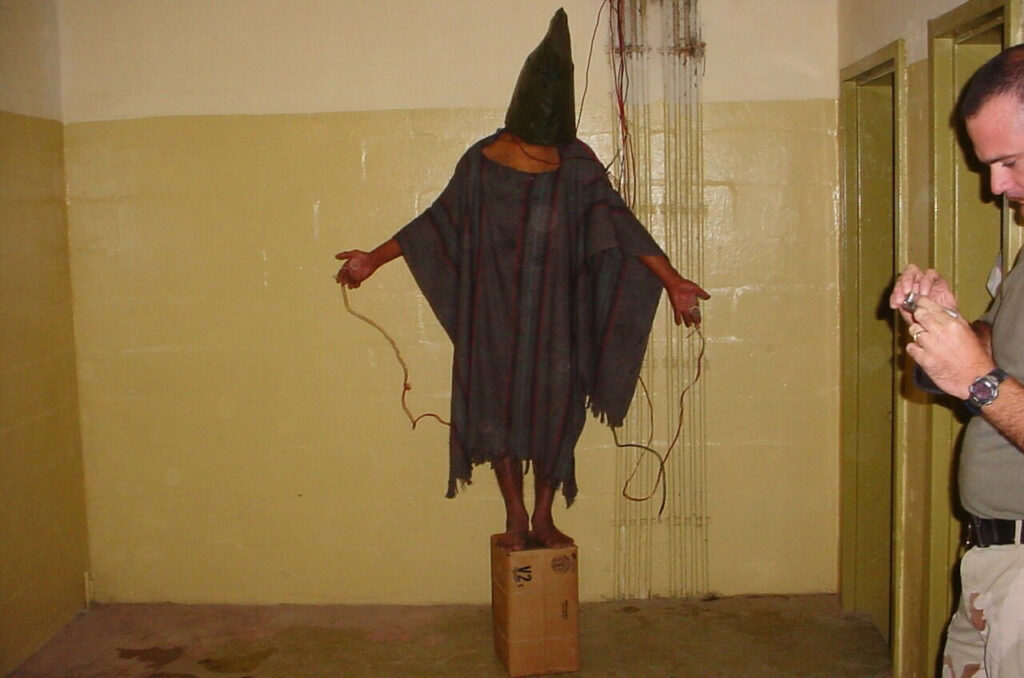 During the war in Iraq that began in March 2003, personnel of the United States Army and the Central Intelligence Agency committed a series of human rights violations against detainees in the Abu Ghraib prison in Iraq. These violations included physical and sexual abuse, torture, rape, sodomy, and murder.  The abuses came to widespread public attention with the publication of photographs of the abuse by CBS News in April 2004. The incidents received widespread condemnation both within the United States and abroad, although the soldiers received support from some conservative media within the United States.

The administration of George W. Bush asserted that these were isolated incidents, not indicative of general U.S. policy. This was disputed by humanitarian organizations such as the Red Cross, Amnesty International, and Human Rights Watch. These organizations stated that the abuses at Abu Ghraib were not isolated incidents, but were part of a wider pattern of torture and brutal treatment at American overseas detention centers, including those in Iraq, Afghanistan, and Guantanamo Bay. Several scholars stated that the abuses constituted state-sanctioned crimes.

The United States Department of Defense removed seventeen soldiers and officers from duty, and eleven soldiers were charged with dereliction of duty, maltreatment, aggravated assault and battery. Between May 2004 and March 2006, these soldiers were convicted in courts-martial, sentenced to military prison, and dishonorably discharged from service. Two soldiers, Specialist Charles Graner and PFC Lynndie England, were sentenced to ten and three years in prison, respectively. Brigadier General Janis Karpinski, the commanding officer of all detention facilities in Iraq, was reprimanded and demoted to the rank of colonel. Several more military personnel who were accused of perpetrating or authorizing the measures, including many of higher rank, were not prosecuted. It is reported that most inmates were innocent of the crimes they were accused of and were simply detained due to them being in the wrong place at the wrong time.

Many of the torture techniques used were developed at Guantánamo detention centre, including prolonged isolation; the frequent flier program, a sleep deprivation program whereby people were moved from cell to cell every few hours so they couldn’t sleep for days, weeks, even months, short-shackling in painful positions; nudity; extreme use of heat and cold; the use of loud music and noise and preying on phobias.

The Taguba Report (May 2004) is the common name of an official Army Regulation 15-6 military inquiry conducted in 2004 into the Abu Ghraib prisoner abuse by United States military forces in Iraq.

In his Findings of Fact, Major General Taguba wrote:

“That between October and December 2003, at the Abu Ghraib Confinement Facility (BCCF), numerous incidents of sadistic, blatant, and wanton criminal abuses were inflicted on several detainees. This systemic and illegal abuse of detainees was intentionally perpetrated by several members of the military police guard force (372nd Military Police Company, 320th Military Police Battalion, 800th MP Brigade), in Tier (section) 1-A of the Abu Ghraib Prison (BCCF). The allegations of abuse were substantiated by detailed witness statements (ANNEX 26) and the discovery of extremely graphic photographic evidence…In addition to the aforementioned crimes, there were also abuses committed by members of the 325th MI Battalion, 205th MI Brigade, and Joint Interrogation and Debriefing Center (JIDC). Specifically, on 24 November 2003, [name redacted], 205th MI Brigade, sought to degrade a detainee by having him strip and returned to cell naked. (ANNEXES 26 and 53)”.

Records pertaining to: FBI’s Abu Ghraib Investigation of its agents and their potential knowledge of what happened inside the prison FBI Release #1 [56 Pages, 20.9MB]

Records pertaining to: FBI’s Abu Ghraib Investigation of its agents and their potential knowledge of what happened inside the prison FBI Release #2 [4 Pages, 0.6MB]

On May 13, 2004, then Secretary of Defense Donald Rumsfeld visited Abu Ghraib prison.  He stated during this time that whomever was responsible for the atrocities at the prison, would be brought to justice.

Intrigued by the event, I was interested in documents relating to this. So, on May 18, 2004, I requested all documents from the Department of Defense, related to Rumsfeld’s visit.

I did not know it then, but I would wait more than 11 YEARS for the documents to be reviewed and released.  But, what I also did not realize, was that it would be another 15 MONTHS before I would find out that the DOD sent my response to the wrong address.

I did check in from time to time asking for updates relating to my request. However, I never got any updates. When I finally stopped asking, and requested the FOIA Case Processing notes on September 14, 2016, I was contacted by the DOD with the following note:

We have received your request for the case processing notes for 04-F-1563. I was concerned by your statement that you never received a response, particularly because I recall signing this case. It was one of our ten oldest last year so I remember it fairly well.

We did close you request in June of 2015, however, it appears your final response was mailed to the incorrect address. The AO for the case will send you a copy of the response letter and the responsive documents electronically.

Please accept our apologies and let me know if we can do anything else for you on this matter.

Thankfully, the office at the DOD sent me the responsive documents electronically (now available below). And by looking at their letter — they sent these records to the Associated Press (AP) in June of 2015.  I am glad I kept pushing for answers – or I would’ve been a REALLY old man before I figured out what happened.

Although not the longest I have waited for documents to come, it’s up there. But what is strange, is why would it take so long? There were only 12 pages that required review. That is almost 1 YEAR PER PAGE by the time I got the documents in my hands. In addition, the redactions are all (b)(6) exemptions, which means they are names or it’s information redacted that is an invasion of personal privacy, if released. Those are pretty easy to determine, and should not take a year per page for review.

I also obtained the case processing notes, and once I did, there were excessive (b)(5) redactions. I appealed that, and received a second release two years later. All the records are available below.

FOIA Case 04-F-1563 Processing Notes (Post-Appeal Release) [42 Pages, 5.9MB] – Since the case took 11+ years to process, it’s always interesting to see the progression of how the documents were handled and ultimately declassified. I appealed the release below, based on the fact I got excessive (b)(5) exemptions. They released a bit more of the case processing notes, based on that appeal. This is the post-appeal response.

FOIA Case 04-F-1563 Processing Notes (Original Release) [45 Pages, 12.1MB] – This is the original release of case processing notes. I appealed this released, and two years later, received the above link. This released is archived here for reference.

Counterterrorism Detention and Interrogation Activities, 07 May 2004