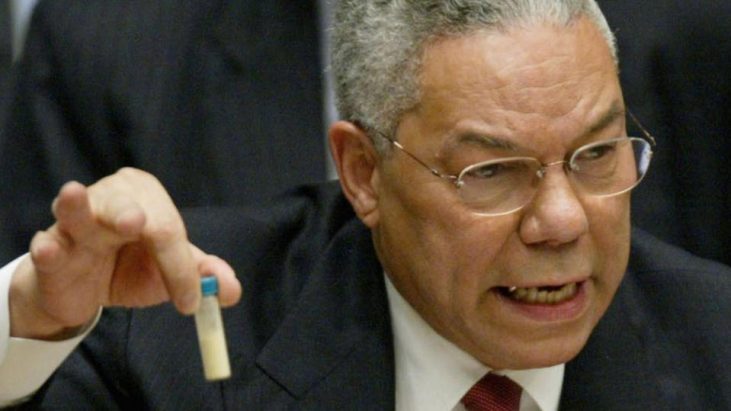 The fifth president of Iraq, Saddam Hussein, was internationally known for his use of chemical weapons in the 1980s against Iranian and Kurdish civilians during and after the Iran–Iraq War. In the 1980s he pursued an extensive biological weapons program and a nuclear weapons program, though no nuclear bomb was built.

President Bush said that the biggest regret of his presidency was “the intelligence failure” in Iraq, while the Senate Intelligence Committee found in 2008 that his administration “misrepresented the intelligence and the threat from Iraq”. A key CIA informant in Iraq admitted that he lied about his allegations, “then watched in shock as it was used to justify the war”.

The following is a list of documents pertaining to Iraq & Weapons of Mass Destriction (WMDs).

Iraq: Chemical Weapons Continue to be Recovered, April 4, 2006 – After 2018 MDR Review on 9 May 2018 – [ 22 Pages, 2.3MB ] – This assessment provides an overview of the chemical munitions recovered in Iraq since May 2004 and examines the possible location and ramifications of residual pre-1991 Gulf War Iraqi chemical weapons. This first link is the 2018 release after an MDR review I requested in the same year.  Sadly, a few redaction citations changed, and very little changed in the report, however, they did declassify the existence of the Single 152-mm Binary Sarin Cannon Projectile, which was classified in the previous release. (See below for 2014 release).

Iraq’s Continuing Programs for Weapons of Mass Destruction, October 2002 (Unclassified Version) [27 Pages, 0.7MB] –  This document was released publicly, however, there was a classified version which the CIA conveniently did not include during the processing of this FOIA request. I then filed for a copy (and Mandatory Declassification Review [MDR]) for the other version and after a few months, received a much less redacted version of the record than was previously declassified in 2004.

Iraq’s Continuing Programs for Weapons of Mass Destruction, October 2002 (Classified Version) [98 Pages, 0.7MB] –  A Mandatory Declassification Review (MDR) was completed in late December of 2014, and released to The Black Vault in January of 2015.

The Iraq Survey Group (ISG) was a fact-finding mission sent by the multinational force in Iraq after the 2003 invasion of Iraq to find the weapons of mass destruction alleged to be possessed by Iraq that had been the main ostensible reason for the invasion. Its final report is commonly referred to as the Duelfer Report. It consisted of a 1,400-member international team organized by the Pentagon and Central Intelligence Agency to hunt for the alleged stockpiles of weapons of mass destruction, including chemical and biological agents, and any supporting research programs and infrastructure that could be used to develop WMD.

Click here to read Vol. 1 of the report (pdf)