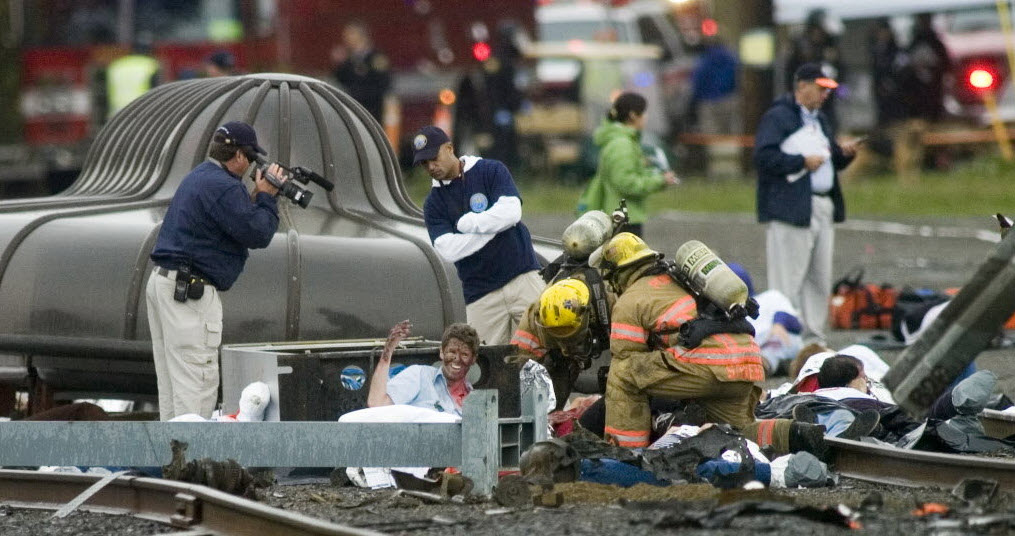 The Top Officials Exercise (TOPOFF) is a congressionally mandated biennial cycle of seminars, planning events, and national exercises designed to strengthen the Unites States’ capacity to prevent, prepare for, respond to, and recover from large scale terrorist attacks. Every two years, the cycle culminates in an exercise that simulates a coordinated terrorist attack involving biological, chemical, radiological, or weapons of mass destruction (WMD). The exercises seek to draw the participation of top officials and key personnel from all levels of government who have domestic response and consequence management roles and responsibilities in actual terrorist events. The Department of Homeland Security’s (DHS) Office of State and Local Government Coordination and Preparedness (SLGCP) sponsors the TOPOFF series plus manages the design, planning, conduct, and evaluation of the exercises.

Top Officials 2 (TOPOFF 2) was a Congressionally-mandated, national terrorism exercise that was designed to identify vulnerabilities in the nation’s domestic incident management capability by exercising the plans, policies, procedures, systems, and facilities of federal, state, and local response organizations against a series of integrated terrorist threats and acts in separate regions of the country.

TOPOFF 2 was the largest and most comprehensive terrorism response exercise ever conducted in the United States.  The exercise scenario, which was played out from May 12 to May 16, 2003, depicted a fictitious, foreign terrorist organization that detonated a simulated radiological dispersal device (RDD) in Seattle, Washington, and released the Pneumonic Plague (Yersinia pestis) in several Chicago metropolitan area locations.  There was also significant pre-exercise intelligence play, a cyber-attack, and credible terrorism threats against other locations.  The exercise brought together top government officials from 25 federal, state, and local agencies and departments, and the Canadian Government to test the domestic incident management in response to WMD terrorist attacks in the United States.

The TOPOFF 3 full scale exercise, conducted from April 4–8, 2005, was the third in the series, and by any measure the most ambitious civilian terrorism response exercise ever conducted. The design incorporated many more elements, roles, and participants than in previous exercises and the extent of play involved new challenges. For example, the recently released National Response Plan (NRP) and National Incident Management System (NIMS) were used as both the framework and approach for response and incident management. For the first time, pre-exercise intelligence play was also added. In addition, the exercise sought to synchronize national goals and objectives, improve international coordination and cooperation during a linked terrorist incident response, and assess as well as strengthen government, nongovernment, and private sector partnerships in response to WMD incidents.

TOPOFF 3  involved a biological attack in New Jersey and a chemical attack in Connecticut. Over 20,000 participants were involved representing more than 250 federal, state, and local agencies, private businesses, volunteer groups, and international organizations. Canada and the United Kingdom joined the simulation as international partners that conducted simultaneous, related exercises in concert with U.S. efforts. DOS took the lead in organizing the international component by managing the interface among the United States, Canada, and the United Kingdom. The benefit of international participation in the TOPOFF exercises cannot be overstated. The United Kingdom’s efficient response and management of the London subway bombing of July 2005 were due in part to the lessons learned from their participation in TOPOFF 3.

TOPOFF 4 involved over 23,000 participants from Federal, international, State, territorial, regional, tribal, local, volunteer, and private sector organizations. TOPOFF 4 was conducted from October 15-24, 2007, and simulated Radiological Dispersal Device (RDD), or “dirty bomb” attacks in the Territory of Guam, Portland, Oregon, and Phoenix, Arizona. The scenario simulated casualties and widespread contamination, and although real weapons were not used, the response was mounted as if they had been. Three international partners participated in TOPOFF 4: Australia, Canada and the United Kingdom. As in previous TOPOFF exercises, S/CT managed the international aspects of the exercise, which focused on crisis management, information sharing, consular operations, and public messaging. International activities focused on border issues, commercial aviation to and from the United States, and U.S. acceptance of international offers of assistance. Teams from Australia, Canada and the United Kingdom deployed to exercise locations to assist their citizens, and to interact with local and Federal authorities. In Washington DC, DOS activated an Exercise Task Force and participated in high level meetings with other Department and Agency decision-makers. In addition, DOS deployed a representative to the Joint Field Office in Portland to coordinate with the international teams and domestic interagency responders. American Embassies in Canberra, Ottawa and London convened Emergency Action Committees and worked closely with host governments and the DOS Task Force.