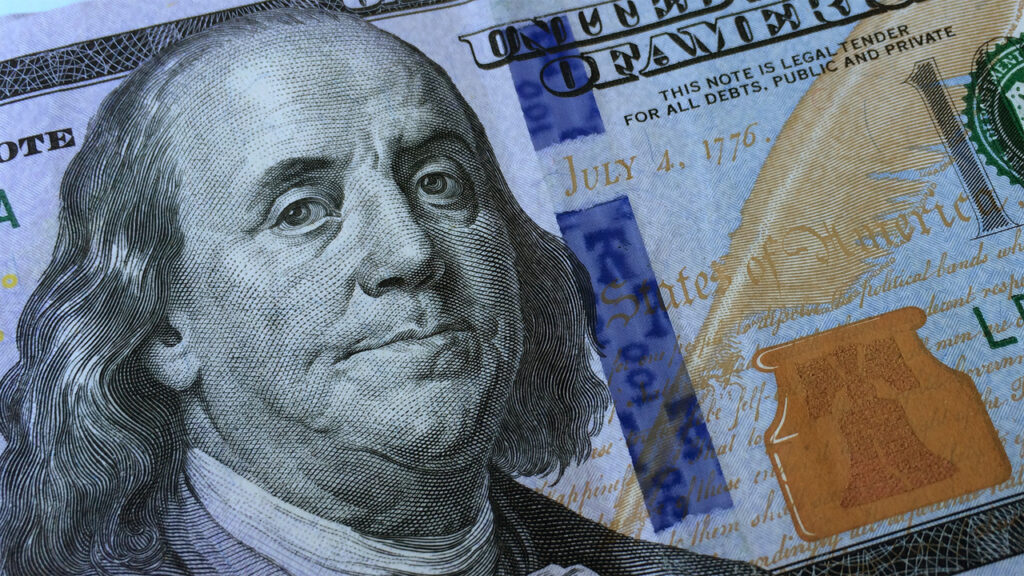 In 2009, the United States introduced a new version of the $100 bill. Below, is a description from Wikipedia about the background to the bill:

The United States one hundred-dollar bill ($100) is a denomination of United States currency featuring statesman, inventor, diplomat and American founding father Benjamin Franklin on the obverse of the bill. On the reverse of the banknote is an image of Independence Hall. The $100 bill is the largest denomination that has been printed since July 13, 1969, when the denominations of $500, $1,000, $5,000, and $10,000 were retired. The Bureau of Engraving and Printing says the average life of a $100 bill in circulation is 90 months (7.5 years) before it is replaced due to wear and tear.

The bills are also commonly referred to as “Benjamins”, in reference to the use of Benjamin Franklin’s portrait on the denomination, “C-Notes”, based on the Roman numeral for 100. The bill is one of two denominations printed today that does not feature a President of the United States; the other is the $10 bill, featuring Alexander Hamilton. It is also the only denomination today to feature a building not located in Washington, D.C., that being the Independence Hall located in Philadelphia on the reverse. The time on the clock of Independence Hall on the reverse, according to the U.S. Bureau of Engraving and Printing, shows approximately 4:10[2] on the older contemporary notes and 10:30 on the series 2009A notes released in 2013.

One hundred hundred-dollar bills are delivered by Federal Reserve Banks in mustard-colored straps ($10,000).

The Series 2009 $100 bill redesign was unveiled on April 21, 2010, and was issued to the public on October 8, 2013. The new bill costs 12.6 cents to produce and have a blue ribbon woven into the center of the currency with “100” and Liberty Bells, alternating, that appear when the bill is tilted.

According to former Federal Reserve Chairman Ben Bernanke, more than two-thirds of all $100 notes circulate outside the United States making it the most popular banknote.

The follow are records I received under the FOIA regarding the marketing, distribution and creation of the bill:

Bureau of Engraving and Printing

Bureau of Engraving and Printing, Release April 2015 [768 Pages, 57MB] – In this request, I asked for a copy of all reports submitted to the Treasury Department, from Burson-Marsteller AKA Young & Rubicam, regarding the use, redesign, implementation, marking of, etc., of the newly designed $100 bill. There are additional records, which I have requested an index of, for further investigation. Once that is received, I will post the index here.

Board of Governors of the Federal Research System

Federal Reserve System, Release July 2015 [6 Pages, 1.7MB] – In this request, the Federal Reserve denied my request, in full, despite having found more than 400 pages of material. I appealed their decision, and after 5 months, was ultimately denied again for accessing the documents. They claim there is not a single word of releasable information regarding this.