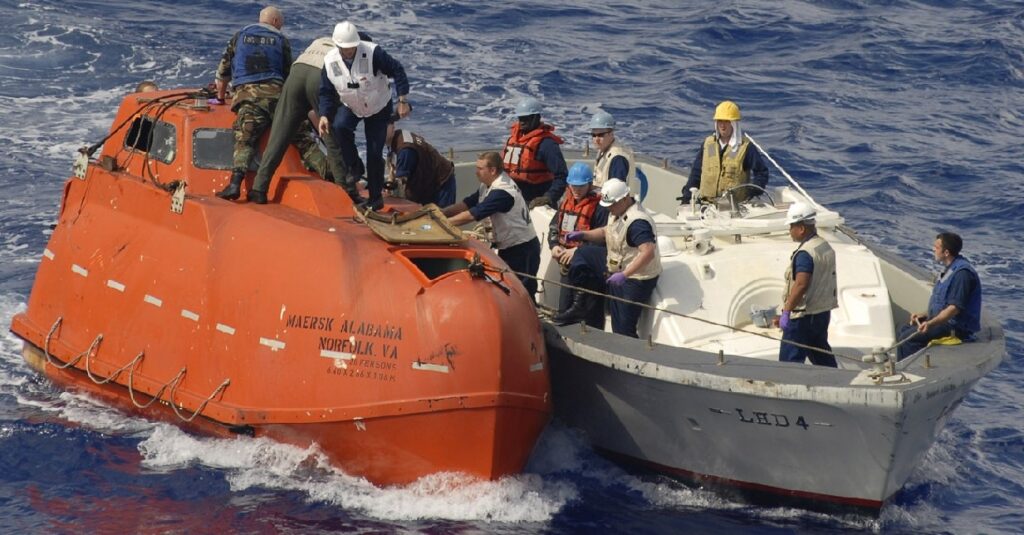 The Maersk Alabama hijacking was a series of events involving piracy that began with four Somali pirates seizing the cargo ship MV Maersk Alabama 240 nautical miles (440 km; 280 mi) southeast of the Somalia port city of Eyl. This event ended with the Action of April 12, 2009. It was the sixth vessel in a week to be attacked by pirates who had previously extorted ransoms in the tens of millions of dollars. It was the first successful pirate seizure of a ship registered under the American flag since the early 1800s.

On Sunday, April 12, 2009, Capt. Richard Phillips was rescued, reportedly in good condition, from his pirate captors. The commander of United States Fifth Fleet Vice Admiral William E. Gortney reported the rescue began when Commander Frank Castellano, captain of the Bainbridge, determined that Phillips’ life was in imminent danger and ordered the action. President Barack Obama had previously given standing orders to take action if it was determined Phillips’ life was in immediate danger. (Source: Wikipedia)

The following is a collection of documents pertaining to the rescue.

Offers an interesting look inside the intelligence gathering of the CIA.  Each .pdf below offers intelligence packages consisting of news articles and other notes of interest collected by the CIA.  All the dates are from the week of the incident.

Following is the Libya Media Summary produced by me Public Affairs Office at the US Embassy in Libya [8 Pages, 1.1mb]

This daily media review is compiled by the Political Section of the American Embassy in Nairobi, Kenya [17 Pages, 2.68mb]

This press reyjew is compiled by the US Africa Command Public Affairs Office in Stuttgart [22 Pages, 3.16mb]

The following was produced by the Public Affairs Office of US Embassy Ankara [9 Pages, 1.27mb]

This press reyjew is compiled by the US Africa Command Public Affairs Office in Stuttgart [20 Pages, 2.9mb]

These document came months after the above in response to my original FOIA request. Occasionally, one agency will find documents from another agency, and are required to have that agency review them for release.