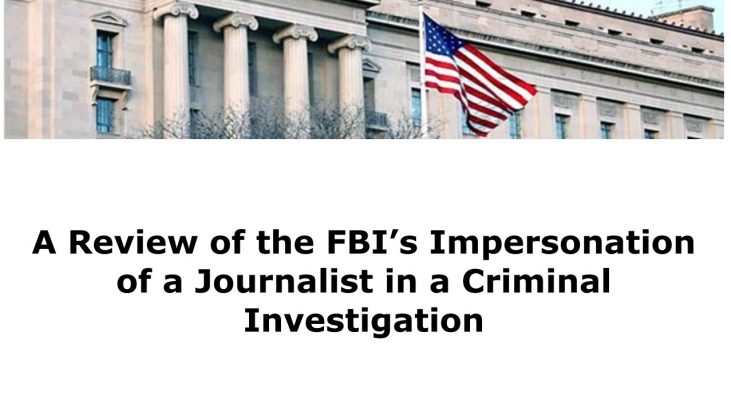 A Review of the FBI’s Impersonation of a Journalist in a Criminal Investigation, September 2016

Over the course of 1 week in June 2007, a 15-year old high school student emailed a series of bomb threats to administrators and staff at Timberline High School, near Seattle, Washington. The threats caused daily school evacuations. The individual used “proxy servers” to e-mail the bomb threats in order to hide his location. When local law enforcement officials were unable to identify or locate the individual, they requested assistance from a cybercrime task force supervised by the Federal Bureau of Investigation’s (FBI) Seattle Field Division.

FBI agents on the task force, working with FBI technology and behavioral experts at Headquarters (FBIHQ), developed a plan to surreptitiously insert a computer program into the individual’s computer that would identify his location. An FBI undercover agent posed as an editor for the Associated Press (AP) and attempted to contact the individual through e-mail. During subsequent online communications, the undercover agent sent the individual links to a fake news article and photographs that had the computer program concealed within them.

The individual activated the computer program when he clicked on the link to the photographs, thereby revealing his location to the FBI. FBI and local law enforcement agents subsequently arrested the individual and he confessed to emailing the bomb threats.

The FBI did not publicize the assistance its agents provided local law enforcement. However, on July 18, 2007, 2 days after the individual pleaded guilty, an online technology news website published an article that detailed the method by which the FBI identified the individual. Seven years later, in October 2014, The Seattle Times published an article that disclosed the fact that an FBI employee posed as a member of the news media when it contacted and then identified the subject as the author of the bomb threats.

Later that same month the AP sent a letter to then-Attorney General Eric Holder protesting the FBI’s impersonation of a member of the news media in connection with the FBI’s investigation of the bomb threats. In addition, several newspapers wrote articles questioning the tactics the FBI used to identify and arrest the subject who sent the threats.

One week later, on November 6, 2014, FBI Director James Comey wrote a letter to the editor of The New York Times defending the FBI’s actions. In particular, Comey stated that the “technique [the FBI used to identify and apprehend the individual who sent the threats] was proper and appropriate under Justice Department and F.B.I. guidelines at the time” and that “[t]oday, the use of such an unusual technique would probably require higher level approvals than in 2007, but it would still be lawful and, in a rare case, appropriate.”

That same day, the Reporters Committee for Freedom of the Press, on behalf of 25 other news organizations, wrote a letter to Comey and Holder voicing its objection to the practice of FBI agents impersonating journalists, saying the practice endangers the media’s credibility and undermines its independence, and that it appeared to violate FBI guidelines for when such tactics were permissible.

We initiated this review to examine whether under Department of Justice and FBI policies in effect at the time of the 2007 investigation, agents obtained the appropriate approval for the undercover activities the FBI conducted to locate the individual e-mailing the bomb threats. We also examined whether the undercover activities in 2007 would require a higher level of approval if conducted today under current Department and FBI polices.

As described in our full report, we concluded that FBI policies in 2007 did not expressly address the tactic of agents impersonating journalists. We further found that the FBI’s undercover policies then in effect provided some relevant guidance, but were less than clear. As a result, we believe that the judgments agents made about aspects of the planned undercover activity in 2007 to pose as an editor for the AP did not violate the undercover policies in place at the time.

We also determined that once the undercover plan was launched, certain investigative decisions were made concerning communications the undercover agent sent to the individual suspected of making the bomb threats that could have increased the level of approval required under FBI policy, a possibility the investigative team did not appear to fully consider. As we were finalizing this report, the FBI adopted a new interim policy in June 2016 that provides guidance to FBI employees regarding their impersonation of members of the news media during undercover activity or an undercover operation (defined as a series of related undercover activities over a period of time). We found that prior to the adoption of this new interim policy, FBI policy would not have prohibited FBI employees from engaging in the undercover activities agents conducted during the 2007 Timberline investigation.

The new interim policy, however, clearly prohibits FBI employees from engaging in undercover activity in which they represent, pose, or claim to be members of the news media, unless the activity is authorized as part of an undercover operation. In order for such an operation to be authorized, an application must first be approved by the head of the FBI field office submitting the application to FBIHQ, reviewed by the Undercover Review Committee at FBIHQ, and approved by the Deputy Director, after consultation with the Deputy Attorney General.

We believe the FBI’s new interim policy is a significant improvement to policies that existed in 2007 during the Timberline investigation, as well as to those policies that would have governed similar undercover activities prior to June 2016. The new interim policy also is an important extension of policies the Department of Justice has previously implemented to regulate certain law enforcement activities that affect members of the news media, such as obtaining information from or about members of the news media in criminal and civil investigations.

The FBI should move expeditiously to update its undercover policy guide to incorporate this new interim policy, and widely inform and educate FBI employees about the policy’s existence and application. Based upon our review, we made three recommendations to help ensure that FBI policies governing certain undercover activities and operations are well known, clear, and understood. The FBI concurred with the recommendations.

A Review of the FBI’s Impersonation of a Journalist in a Criminal Investigation, September 2016 [30 Pages, 0.7MB]

Follow-up Audit of the Department of Justice’s Implementation of and Compliance with Certain Classification Requirements, September 2016