(Note: Audio is never perfect in live settings. This audio was worked on since the… 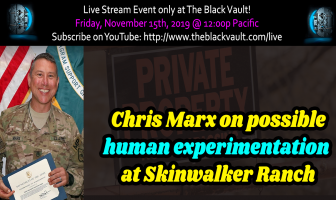 My guest today is Chris Marx. He is a former law enforcement officer for the state of New Mexico for more than 9 years. After his work there, he went on to join the U.S. Army and became a certified Military Police Investigator. He also had two tours of deployment in Iraq between 2007 and 2009. Chris was hired by Bigelow Aerospace Advanced Space Studies, or BAASS, to work as an investigator for billionaire Robert Bigelow. Chris worked on the infamous Skinwalker Ranch, utilizing conventional as well as unconventional research techniques in the field. He left for another combat tour in Afghanistan in 2016, and upon his return, was transferred to work within Bigelow Aerospace itself, which he did until his resignation in February 2019.

On July 25, 2019, an organization called To The Stars Academy of Arts & Science, led by rock star Tom DeLonge, announced they had acquired a “groundbreaking” piece of metamaterial. Although the press release never said it was tied to anything extraterrestrial or alien, the implications were there. However, specific details… were not. Today, Linda will give us a special one-on-one interview, outlining the origin, history and investigation into a piece that is intriguing curious minds around the globe, and it’s even, caught the attention of the U.S. Army.

On Episode #44, join me John Greenewald, Jr. as I go over the month of updates on The Black Vault for October. It’s been a HUGE month with all sorts of new documents. I’ll cover the highlights, then I’ll follow it up answers your questions via phone and text.

On Episode #43, Mr. Grant Cameron returns to the show to speak about his time scouring the files of Stanton Friedman, now residing at the Provincial Archives in Canada. We speak about some of his discoveries within the holdings, and also tackle MJ-12, Bob Lazar, “Disclosure” and much more.