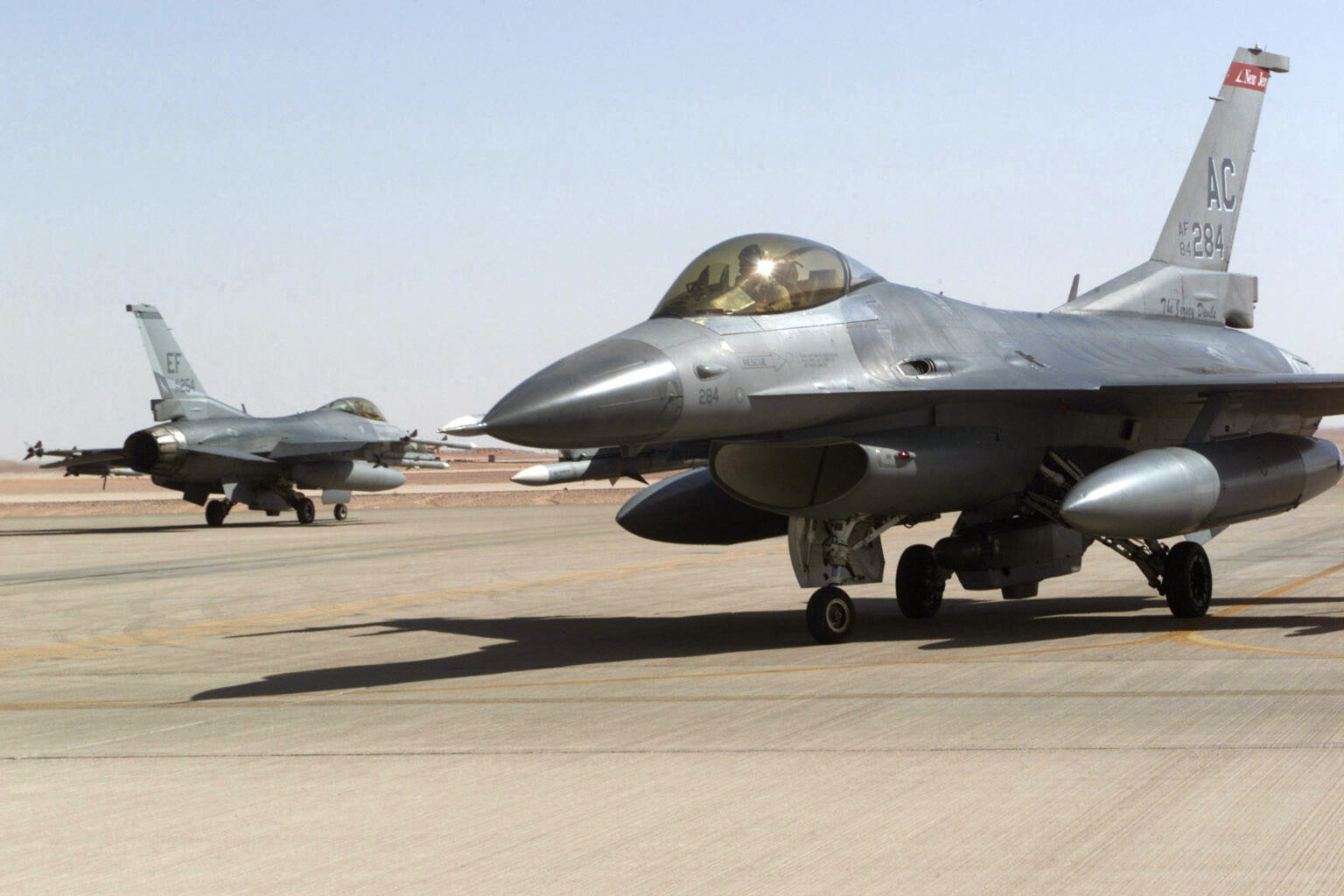 US Air Force F-16 Falcons from the New Jersey Air National Guard prepare to have their weapons armed at Prince Sultan Air Base, Saudi Arabia, during Operation SOUTHERN WATCH. The F-16Õs are a part of the coalition forces of the 363d Air Expeditionary Wing, Prince Sultan AB, SAU, that enforces the no-fly and no-drive zone in Southern Iraq to protect and defend against Iraqi aggression.
Iraq Wars

Operation Southern Watch was an operation conducted by Joint Task Force Southwest Asia (JTF-SWA) with the mission of monitoring and controlling airspace south of the 32nd Parallel (extended to the 33rd Parallel in 1996) in Iraq, following the 1991 Gulf War until the 2003 invasion of Iraq.

A Report Bibliography, Keyword: “Operation Southern Watch” from the DTIC (Word Document [.doc]) [22 Pages, 261 KB] – Responsive documents from a request I filed from the DIA.

The Effect of Operational Deployments on Army Reserve Component Attrition Rates and Its Strategic Implications[55 Pages, 205 KB] – This monograph will assess the effects of operational deployments on Army Reserve Component attrition rate and its strategic implications for the U.S. Army. It will challenge the belief that the current use of the Army Reserve Component in peace time operational deployments is having a negative effect on its attrition rate. Following the end of Operation Desert Shield/Desert Storm the United States’ military began a dramatic down sizing of its active and reserve forces. By the end of 1993, the U.S. Army had been reduced from its late 1980s size of eighteen combat divisions to only ten combat divisions. As the draw down of military forces continued the number of operational deployments increased for the active Army. Haiti, Somalia, Bosnia, and Kosovo were added to the active Army’s already crowded plate that included the Multinational Force and Observes in the Sinai Peninsula and Operation Southern Watch in Southwest Asia. It became apparent that the active Army required assistance with these additional missions or risk a degradation of its unit readiness and morale. As a result of this dilemma, the decision was made to activate units and personnel of the Army National Guard and Army Reserve to support on-going deployments. This monograph reviews the findings of four studies conducted to determine the effects of operational deployments on the U.S. military. In addition, the attrition rate for the Army National Guard and Army Reserve is reviewed, to include high demand units, in order to determine linkages between the increased use of the reserve component and corresponding attrition.

Modern Air Occupation Strategy Case Study: Operation Southern Watch [34 Pages, 196 KB] – At approximately 8:15 a.m. Eastern Standard Time today, British Royal Air Force GR-1 “Tornado” aircraft enforcing the Southern No-Fly Zone struck an Iraqi military radar site approximately 15 miles south of Al Basrah near Ash Shuaybah. The strikes were in response to two Iraqi violations of the Southern No-Fly Zone and aircraft illuminations by Iraqi surface-to-air missile sites & Coalition air and naval forces are responsible for enforcing the no-fly zones over Iraq and UNmandated maritime sanctions. At the same time, these forces continuously assess the level of threat posed by the Iraqi forces and take actions that are necessary to reduce these threats and to defend themselves & Since Desert Fox, Saddam Hussein has significantly increased the threat to our pilots and air crews patrolling the no-fly zones through his rhetoric and actions. Iraq has announced its intent to bring down a coalition aircraft, and in fact has issued a bounty to Iraqi military personnel for a successful engagement. Despite repeated warnings, Iraqi actions and intentions pose serious threats to our coalition forces and friends in the region. Our actions today are an appropriate response to these threats and are in support of UN mandates. Today, British Royal Air Force, US Navy and US Air Force combat aircraft, including B-2 bombers flown from the United States, halted columns of Iraqi tanks moving toward the Kuwaiti border. This Iraqi movement of troops was in violation of United Nations Security Council Resolution 949. Egypt, Jordan, Saudi Arabia, Kuwait, Bahrain, UAE, and Oman have condemned Iraq’s provocative actions and have pledged to support Kuwait with ground and air forces. The United States and Britain are presently mobilizing additional air and ground reinforcements, but are awaiting consultation with Coalition partners before deploying these forces.

Network Centric Operations (NCO) Case Study: Task Force 50 During Operation ENDURING FREEDOM [33 Pages, 261 KB] – The United States Ship (USS) Carl Vinson (CVN-70) battle group, commanded by Rear Admiral (RADM) (now retired) Thomas E. Zelibor, departed its home port in Bremerton, Washington, on July 23, 2001, ready for a scheduled deployment in support of Operation SOUTHERN WATCH in the Arabian Gulf. On September 11, 2001, the same day that the battle group reached the North Arabian Sea, the al-Qaeda terrorist network attacked the Pentagon, the Twin Towers of the World Trade Center in New York City, and crashed a plane into a rural Pennsylvania field. Over the next several months, the battle group would undertake combat activities it had not planned for and would work in a joint and combined environment fighting the war on terror during Operation ENDURING FREEDOM (OEF). RADM Zelibor, having seen the power of network centric warfare (NCW) firsthand during the Global 2000 wargame, implemented transformational practices that changed the very nature of command and control (C2) within his command. He saw the need for a more efficient and effective way of conducting daily activities. He sought to change the way those in his command could get information and react to that information by reducing the amount of time needed to prepare briefs (that were outdated as soon as they were created) and by introducing the idea of adding time for staff planning. Under RADM Zelibor’s guidance, the sailors and staff were able to transform daily operations and work together more efficiently to achieve their mission. RADM Zelibor’s task force grew by orders of magnitude after the September 11 attacks, the sailors and staff were so successful at streamlining the daily operational process that they were able to make distinct changes that allowed them to experience a shared understanding of the battlespace, to collaborate, and to develop mission objectives more quickly.

The Strategic Failure of Operation Southern Watch and the Need for a New Coalition Based Strategy [30 Pages, 1.44 MB] – The credibility and effectiveness of no-fly zones have been very contentious issues. Operation Southern Watch has been operating for over eight years, in an effort to change the behavior of the Iraqi regime. Politicians and military leaders praise the effects that the operation has supposedly had in achieving U.S. national policy. Yet, while the tactical results of this operation may appear measurably successful, it is having adverse effects at the strategic level. While politicians laud the success of national policy, asserting that the region is better off than before the Gulf War, military leaders focus narrowly on measurable results of the current military mission, such as no-fly zone violations. Both groups tend to avoid the discussion of recent trends that demonstrates the weakening resolve of the coalition to demand continued compliance with United Nations resolutions by fraq. Operation Southern Watch is a strategic failure that is leading to the demise of the Desert Storm coalition. A new strategy should be developed that will be acceptable to all coalition nations. All of the elements of power must be integrated into this strategy. U.S. Central Command (CENTCOM) should consider contributions from inter-agency organizations when developing a new course of action. The CENTCOM staff needs to develop a course of action that will ensure the support and participation of all coalition members for the long-term. Measures of effectiveness must be developed that will determine the effects that a course of action will have on the most important element of Gulf strategy – the coalition. While demonstrations of overwhelming military power may keep Saddam Hussein contained for the short-term, only a firmly united coalition will demonstrate the resolve necessary to guarantee long-term regional stability.