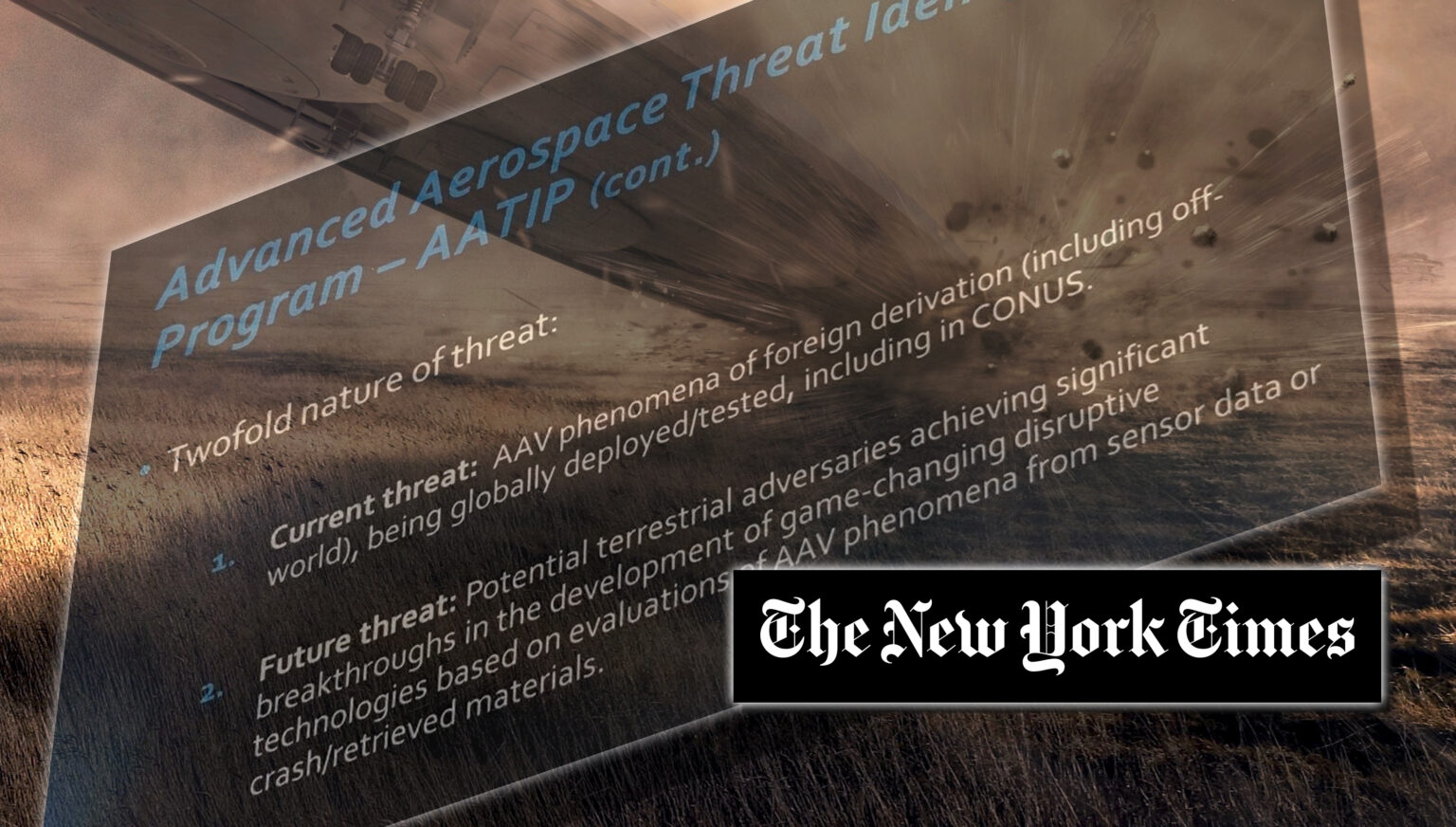 On The Trail of the AATIP UFO PowerPoint Slide

The year 2020 has brought a global pandemic, major earthquakes, a massive explosion in Beirut, and even the acknowledgement of the UFO reality by the U.S. Navy. The year got a bit more bizarre, when in late July, the NY Times published bombshell revelations about “off world vehicles” and even showed a slide from the “Pentagon’s Secret UFO Program” which appeared to have solidified the claim.  But today, in a statement given directly to The Black Vault, the Pentagon denies the use of that slide in any official capacity and says “off world vehicles” do not fit in to the official position of the U.S. government.

“That slide was not used by DoD in any briefing on this subject and does not represent the department’s position,” Pentagon spokesperson Susan Gough said to The Black Vault in an e-mailed statement. “The slide appears to be one used by a subcontractor who had worked under the AAWSAP contract, in briefings by the subcontractor after AATIP ended.”

The single slide Gough is referring to was printed in the NY Times on July 28, 2020, as part of their “Times Insider” section. The slide broke down information relating to the Advanced Aerospace Threat Identification Program or AATIP, and it talked about “Advanced Aerial Vehicles” (AAVs) that included those from “off-world.” This slide seemed to reinforce previously published statements from Dr. Eric Davis, who also told the NY Times that he was giving classified briefings about “off-world vehicles not made on this earth” even as recently as March of this year to staff members of multiple U.S. Senate committees.

Worldwide coverage of these claims quickly ensued after the NY Times published their piece, which later became marred with multiple corrections. The most critical piece of information retracted by the NY Times was a claim that Senator Harry Reid believed that “off world vehicles” may have crashed on Earth. Other information was also corrected within the article, as noted, but additionally there was at least one additional correction made that remains unacknowledged by the NY Times.

Although Dr. Davis’ claims remain untouched, for now, it does invoke tones of strong skepticism from those that may seek evidence confirming such a bombshell revelation.

Plain and simple, the claim has come with none, as acknowledged by the NY Times itself. “The constraints on discussing classified programs — and the ambiguity of information cited in unclassified slides from the briefings — have put officials who have studied U.F.O.s in the position of stating their views without presenting any hard evidence,” their July 23rd article stated.

With this lack of evidence, and the corrections that haunt the original NY Times story, should the slide be considered genuine? Luis Elizondo, who has stated since late 2017 that he led the AATIP program for many years, says you should, and he says he even utilized visuals that were “very, very similar, if not exact” to the slide in question.

When Elizondo was asked about the Pentagon’s denial, he was not surprised to see what he felt was not the full truth. “DoD is only putting out half-truths here.  Susan has no clue who we briefed and on what topics,” Elizondo asserted. “I know for certain my predecessor had very pointed briefings with very senior personnel and it likely included information similar to what’s on this slide.”

Despite the stark differences in claims, Elizondo and the Pentagon do seem to agree on at least one thing.  There is no official definition for “Off World Vehicles.”  Both parties were asked about official definitions, since in the world of the DOD, most everything has an “official” interpretation, as indicated by the 376-page “DOD Dictionary of Military and Associated Terms.” (Which, for the record, does not include “off world”.)  When asked about the official stance of what “off world vehicle technology really meant, Elizondo said, “There is no official definition in the DoD lexicon that I am aware of defining the term ‘off world’.” The Pentagon stated the same, with Gough telling The Black Vault, “’Off-world’ is not an official term or designation in DoD.”  At least, it appears all parties agree on that point.

In the course of researching the AATIP slide, The Black Vault discovered that a very similar graphic was used in a lecture by Dr. Hal Puthoff, a former member of the now-defunct Bigelow Aerospace Advanced Space Studies (BAASS) subsidiary of Bigelow Aerospace. BAASS was the organization reported to have received the $22 million contract which was known as the Advanced Aerospace Weapon Systems Applications Program (AAWSAP), a subprogram of the AATIP. The similar slide was utilized in 2018 by Dr. Puthoff in a joint conference of the Society for Scientific Exploration (SSE) and the International Remote Viewing Association (IRVA), and was nearly identical with two differences. The header was left justified vs. center justified, and the word “possibly” was added by Dr. Puthoff to say “possibly off-world” when referencing Anomalous Aerial Vehicles. Other than that, the PowerPoint template was a match. The font size was a match. The font coloring was a match. And the overall styling was a match.

Dr. Puthoff did not address the insertion of the word, but he does admit to making the slide as published by the NY Times, and also says that it is “official.” In a statement given to The Black Vault, Dr. Puthoff said, “Since BAASS was an official contractor involved in providing briefings as part of its duties, it was official.” Leslie Kean, investigative journalist who co-write the NY Times piece and is credited for having supplied the slide to the NY Times after receiving it from an anonymous source, told The Black Vault, “As for the slide, yes it was originally created by a contractor and used for years in AATIP briefings. The content of the slide did not change, but various versions of the slide have markings appropriate to the briefing venue.”

It was thought that the Pentagon may have been referring to Dr. Puthoff’s 2018 lecture post AATIP’s 2012 de-funding and program termination, when they stated “… used by a subcontractor who had worked under the AAWSAP contract, in briefings by the subcontractor after AATIP ended.” But, to ensure accuracy, The Black Vault asked specifically about the Pentagon’s reference to “briefings” in their statement.  Gough responded, and added, “For that, I refer you to NYT – they were the ones claiming that that slide had been used in briefings. It’s not a DoD slide and it was not used in any briefings prepared by DoD.”

The debate on whether this slide is “official” and represents factual information rages on. In fact, so does the entire nature of the “UFO Program” itself. Many questions have arisen over the past approaching three years since it was revealed to the world, and this most recent revelation only offers up more questions than produces viable answers.

In the end, one thing is for certain. The Black Vault will continue to hunt for the truth… no matter where it might lead.