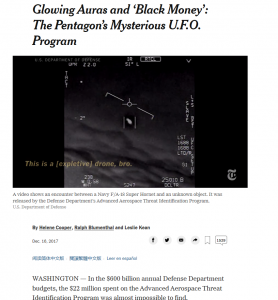 Back in December of 2017, the New York Times posted two videos depicting what was called Unidentified Aerial Phenomena or UAPs. Although the general public would more commonly refer to them as UFOs, they were labeled as the “FLIR1” and “Gimbal” videos and subsequently released by To The Stars Academy of Arts & Science, the source of where the New York Times originally received them. Since their publication, and a third known as “GOFAST” in March of 2018, there has been much mystery surrounding the videos, and their origin, including if they were ever “officially” released. Today, that mystery was lifted.

Although mainstream media around the globe picked up the story in December of 2017 about the Pentagon releasing the videos; no evidence supported it.  For more than a year and a half, the U.S. military remained silent about the videos for the most part, only acknowledging that the videos were never officially released, which was further supported by documents received by The Black Vault under the Freedom of Information Act (FOIA).

It was not until September of 2019, when the U.S. Navy admitted to The Black Vault that all three videos were something they considered UAPs and could not identify them.

“The Navy designates the objects contained in these videos as unidentified aerial phenomena,” said Joseph Gradisher, official spokesperson for the Deputy Chief of Naval Operations for Information Warfare to The Black Vault. This revelation was picked up worldwide, and went viral.

Although the U.S. military commented on the designation of the UFO videos; they would not release them officially through their office of public affairs. They maintained that the videos were never cleared for official release and declined to supply an “official” copy.

However, The Black Vault has been pursuing the videos through the Freedom of Information Act (FOIA) as a second avenue to seek their official release.  On April 27, 2020, the Department of Defense released a press statement that officially released the three videos in question into the general public. In addition, The Black Vault received the official FOIA release letter to the corresponding case.

Their press release entitled, “Statement by the Department of Defense on the Release of Historical Navy Videos,” released on April 27, 2020, reads:

“The Department of Defense has authorized the release of three unclassified Navy videos, one taken in November 2004 and the other two in January 2015, which have been circulating in the public domain after unauthorized releases in 2007 and 2017. The U.S. Navy previously acknowledged that these videos circulating in the public domain were indeed Navy videos. After a thorough review, the department has determined that the authorized release of these unclassified videos does not reveal any sensitive capabilities or systems, and does not impinge on any subsequent investigations of military air space incursions by unidentified aerial phenomena. DOD is releasing the videos in order to clear up any misconceptions by the public on whether or not the footage that has been circulating was real, or whether or not there is more to the videos. The aerial phenomena observed in the videos remain characterized as “unidentified.” The released videos can be found at the Naval Air Systems Command FOIA Reading Room: https://www.navair.navy.mil/foia/documents.”

These videos, are the following, which are maintained in the format as released by NAVAIR:

Although the videos do not add anything new visually, it reinforces a hot topic debate regarding their release. And that was, there was no official release. An investigation by the Air Force Office of Special Investigations, reported on by Tim McMillan for Vice News, also reinforced that the videos were never cleared for public release.

In addition to the above, if the DOD statement is to be believed, there are no higher resolution versions of the videos. At this point, it appears that the general public will have to rely on the resolution they’ve seen for nearly two and a half years to satisfy their UFO desires.

Will more UFO videos be released, either officially or leaked by a whistleblower lurking in the shadows?  Sadly, we will just have to wait and see.