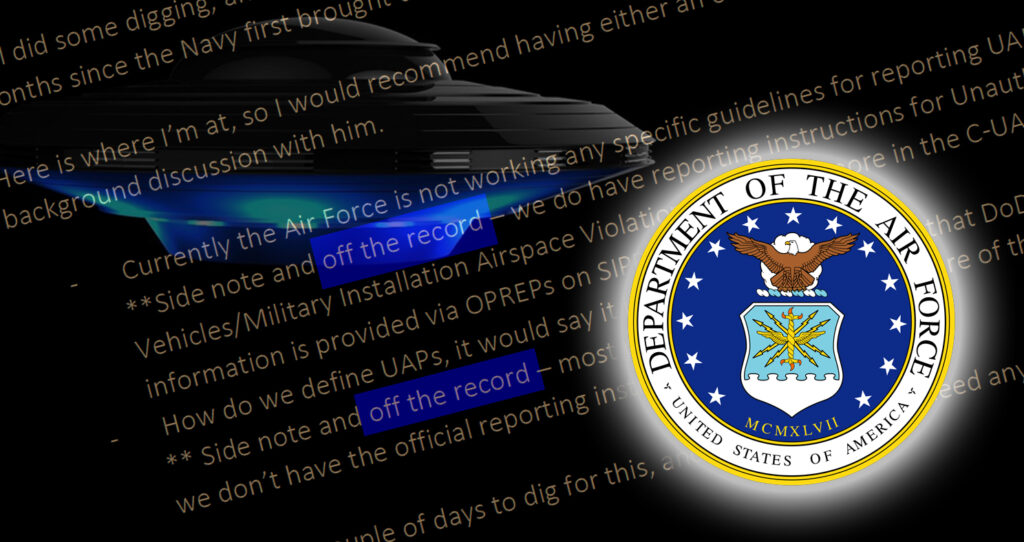 News this week excited UFO enthusiasts, as the Senate Select Committee on Intelligence, chaired by Senator Marco Rubio, issued their report on the Intelligence Authorization Act for FY 2021. Within it was a small, but detailed section on Unidentified Aerial Phenomena, or UAPs. Although better known to the general public as simply UFOs, the report detailed how data held by the Office of Naval Intelligence (ONI); information gathered by geospatial, human and signals intelligence; and case files from the Federal Bureau of Investigation (FBI) would all be utilized for an unclassified report delivered to the Senate within 180 days of the enactment of the Intelligence Authorization Act for FY 2021.  But mysteriously missing yet again from the UAP conversation within this document? The United States Air Force. Recently released internal communications from the Air Force may reveal just why that is.

The internal e-mailed communication received by The Black Vault on June 24, 2020, via the Freedom of Information Act (FOIA), revealed an “off the record” set of comments given from Major Malinda Singleton, spokesperson for the Air Force, to Susan Gough, spokesperson for the Pentagon. As Singleton was tasked to respond to a set of specific media-submitted questions on UAPs, she gave two extra lines of information for Gough’s consideration, but they were not meant public consumption.

When the e-mailed conversation dealt with UAP reporting guidelines by the Air Force, Singleton wrote:

“Currently the Air Force is not working any specific guidelines for reporting UAPs. **Side note and off the record – we do have reporting instructions for Unauthorized Air Vehicles/Military Installation Airspace Violation, but that is more in the C-UAS realm. That information is provided via OPREPs on SIPR.”

Although some may not catch the connection at first glance, the reference Singleton added ties into a theory first proposed by Australian researcher Paul Dean. That is, that UFO cases, those that are likely not just  misidentified drones or balloons, are made within what is called the Operational Reporting (OPREP) system. Specifically, Dean points out OPREP-3 reports, including subcategories 9F and 9B, as being the most significant.

“Briefly, the OPREP–3’s system is used by authorized military personnel to report urgent, serious or ongoing situations or dire events up the chain–of–command,” Dean said in a blog entry he wrote in June of 2019. He then broke down numerous publications from the Air Force that although did not outline UAP reporting procedures, they would likely be included the way the Air Force Instructions were written.

Singleton also added in her comment that OPREP’s would be located on SIPR, or Secret Internet Protocol Router Network. SIPR is a secure system within the Department of Defense (DOD) wherein the data on it is considered classified up to SECRET. In other words, the OPREP’s stored within SIPR are all considered sensitive information and not meant to be released to the public.

However, even Dean showed trepidation about connecting his proposed theory about UAP encounters with OPREP-3 reports. He stated, “The ‘Unauthorized Air Vehicle / Military Installation Airspace Violation / Intrusion’ sub–class of OPREP–3 is by no means a significant UFO reporting channel for, well, ‘our’ sort of UFO’s,” he wrote. “Maybe one day we will find out exactly what has been reported in the last few years,” he concluded, since no OPREP-3 reports were found in response to numerous FOIA requests that he has filed.

Yet, the internal communication from USAF sent to the Pentagon, may actually show Dean is on to something, and his reservations about what he proposed may not be warranted.

Although Singleton references the “C-UAS [Counter-Unmanned Aerial System] realm,” which meant she felt the reports would likely pertain to unidentified drones flying within unauthorized airspace; she did tie the public statement about UAP reporting procedures to the ‘off the record’ similar OPREP procedures, possibly connecting the two, just as Dean proposed. He was excited at the find.

“Here we see an admission that the vital OPREP-3 channel is being used by the USAF to report unidentifiable objects up the chain of command,” he told The Black Vault. “While its true that they are leaning towards unmanned aerial systems, drones, etc., I would argue that in the heat of the moment, anything in the air, no matter how drone-like or otherwise, could be reported!”

Another statement Singleton gave to Gough was about the actual definition for “UAP.”  Her ‘off the record’ comment for this note, shed light on how widespread knowledge about UAPs was within the Air Force.

“How do we define UAPs, it (sic) would say it is similar to the definition that DoD is already using. ** Side note and off the record – most people I talked to were aware of this term, but again we don’t have the official reporting instruction for it.”

There is no way to tell how many people Singleton talked to while researching the media questions she was assigned to answer. However, it would likely be key players within the Air Force structure for safety, policy and procedure, and it appears that at least in September of 2019, the upper echelon of those areas within the Air Force were well aware of UAPs.

With the seeming wide-spread knowledge about UAPs within the Air Force structure, and the reference to a reporting system theorized to include UAP reports, the Air Force may be wrapped up in UAP investigations as well, but it may just be cleverly hidden within covertly named projects and reports that exist within the shadows. It is an odd juxtaposition with that of the Navy, which openly admits a UAP connection between their branch and investigations of the unknown, but that disparity between how the two agencies deal with it all remains unexplained.

Despite that, Dean is encouraged by the document The Black Vault just revealed, as he continues his hunt for OPREP-3 / UAP reports.

“The overall situation is that the USAF here has mentioned the OPREP-3 network and unknown objects in the same packet of information. I’ve been screaming about this for years,” he said. “It’s an important acknowledgement, even if they do generally mean man-made UAS and the like.”

The following are unedited comments that were utilized for this article. They are archived here for reference.

“Here we see an admission that the vital OPREP-3 channel is being used by the USAF to report unidentifiable objects up the chain of command. While its true that they are leaning towards unmanned aerial systems, drones, etc, I would argue that, in the heat of the moment, anything in the air, no matter how drone-like or otherwise, could be reported! Actually, there are two subcategories of USAF reporting OPREP-3s that we found that could generate true UFO reports, aside from just pesky drone sightings. And one of them is near identically worded as the old CIRVIS UFO reporting lay out of old! The overall situation is that the USAF here has mentioned the OPREP-3 network and unknown objects in the same packet of information. Ive been screaming about this for years. It’s an important acknowledgement, even if they do generally mean man-made UAS and the like”