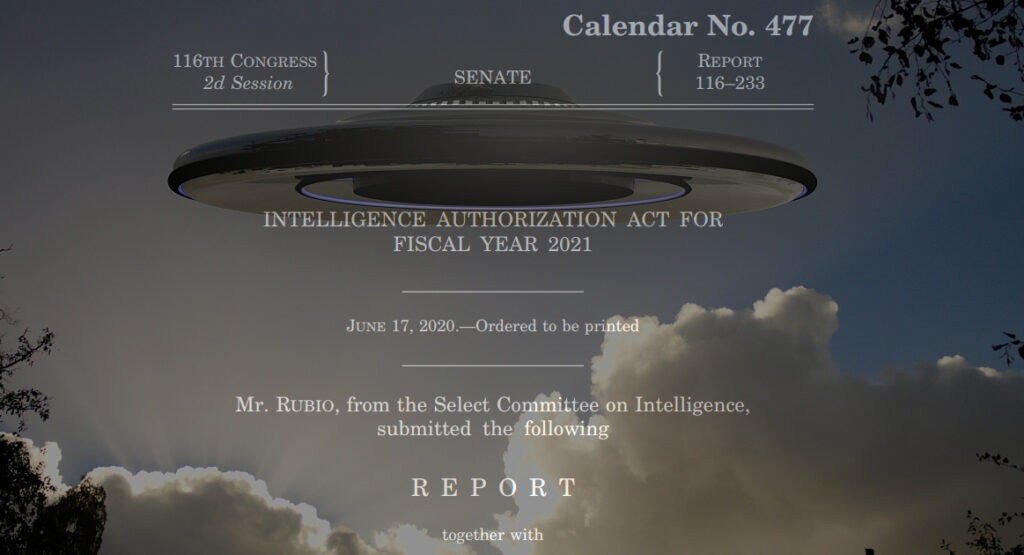 Extensive details were posted regarding an “Unidentified Aerial Phenomenon Task Force” currently operated by the Office of Naval Intelligence. The breakdown was listed within the Intelligence Authorization Act for FY 2021 Supplemental Report, as printed on June 17, 2020, by the 116th Congress. (Special thanks to Steve McDaniel for the find!)

Beginning on Page 11 of the ‘report’ document, with the heading of “Unidentified Aerial Threats,” the following is published:

The Committee supports the efforts of the Unidentified Aerial Phenomenon Task Force at the Office of Naval Intelligence to standardize collection and reporting on unidentified aerial phenomenon, any links they have to adversarial foreign governments, and the threat they pose to U.S. military assets and installations. However, the Committee remains concerned that there is no unified, comprehensive process within the Federal Government for collecting and analyzing intelligence on unidentified aerial phenomena, despite the potential threat. The Committee understands that the relevant intelligence may be sensitive; nevertheless, the Committee finds that the information sharing and coordination across the Intelligence Community has been inconsistent, and this issue has lacked attention from senior leaders.

Therefore, the Committee directs the DNI, in consultation with the Secretary of Defense and the heads of such other agencies as the Director and Secretary jointly consider relevant, to submit a report within 180 days of the date of enactment of the Act, to the congressional intelligence and armed services committees on unidentified aerial phenomena (also known as ‘‘anomalous aerial vehicles’’), including observed airborne objects that have not been identified.

The Committee further directs the report to include:

3. A detailed analysis of data of the FBI, which was derived from investigations of intrusions of unidentified aerial phenomena data over restricted United States airspace;

4. A detailed description of an interagency process for ensuring timely data collection and centralized analysis of all unidentified aerial phenomena reporting for the Federal Government, regardless of which service or agency acquired the information;

5. Identification of an official accountable for the process described in paragraph 4;

7. Identification of any incidents or patterns that indicate a potential adversary may have achieved breakthrough aerospace capabilities that could put United States strategic or conventional forces at risk; and

8. Recommendations regarding increased collection of data,
enhanced research and development, and additional funding
and other resources.

The report shall be submitted in unclassified form, but may include a classified annex.

The “Unidentified Aerial Task Force” information is found within a report filed by Senator Marco Rubio, and the U.S. Senate Select Committee on Intelligence, which accompanies the actual bill. Both documents can be found below.

Although the UAP information outlined above does not currently appear in the bill itself, the development is still extraordinary as the topic is being recognized and outlined within the Congressional record.

It will be interesting to see if the report required/requested will be delivered in the 180 days.
Only time will tell.
###