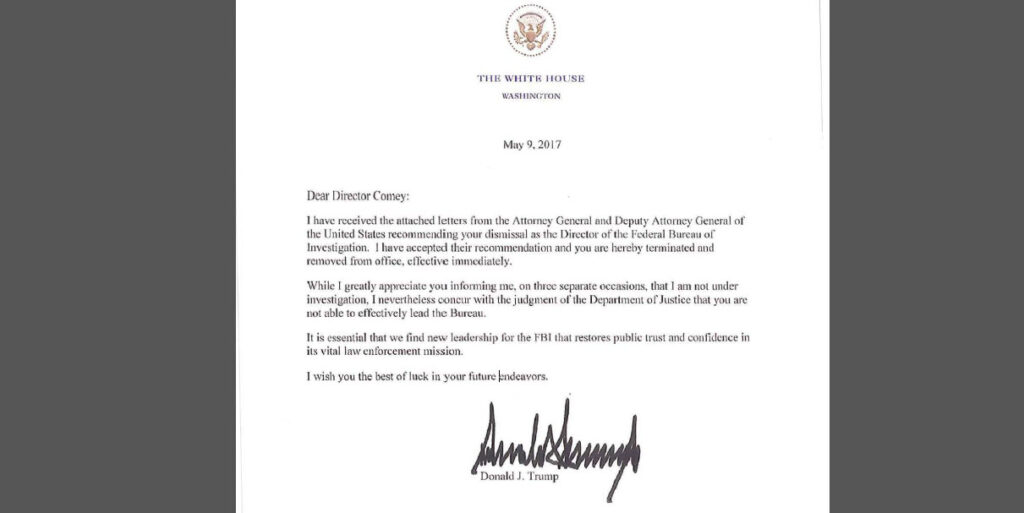 According to the White House press release on May 9, 2017:

Today, President Donald J. Trump informed FBI Director James Comey that he has been terminated and removed from office. President Trump acted based on the clear recommendations of both Deputy Attorney General Rod Rosenstein and Attorney General Jeff Sessions.

“The FBI is one of our Nation’s most cherished and respected institutions and today will mark a new beginning for our crown jewel of law enforcement,” said President Trump.

A search for a new permanent FBI Director will begin immediately.

I have received the attached letters from the Attorney General and Deputy Attorney General of the United States recommending your dismissal as the Director of the Federal Bureau of Investigation. O have accepted their recommendation and you are hereby terminated and removed from office, effective immediately.

While I greatly appreciate you informing me, on three separate occasions. that I am not under investigation, I nevertheless concur with the judgment of the Department of Justice that you are not able to effectively lead the Bureau.

It is essential that we find new leadership for the FBI that restores public trust and confidence in its vital law enforcement mission.

I wish you the best of luck in your future endeavors.

The actual documents, including this letter, and the one President Trump referenced from Attorney General Jeff Sessions, can be viewed below.

On January 16, 2018, the documents were released, and do include the email sent from Attorney General Jeff Sessions regarding the removal of James Comey as director.