In a newly released set of e-mails by the Defense Intelligence Agency (DIA), it’s revealed that the agency worked quickly, but struggled, to get ahead of the reporting when an embarrassing tweet was sent out by one of their employees.  On September 3, 2016, the DIA’s official Twitter account tweeted out a New York Times article, with the headline “Heated Words and Awkward Surprises After Air Force One Lands in China.” In this article, the NY Times profiles an “awkward” situation unfolded when Air Force One landed in China for the G-20 summit:

“On the Chinese tarmac, an angry exchange between a security official and White House aides, and a challenge to President Obama’s national security adviser.” 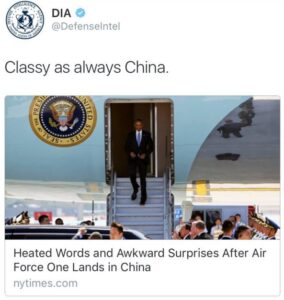 Attached to the article, the DIA tweeted seemingly their own take, which simply read: “Classy as always China.”  This was immediately retweeted by many quick to see the message within the Twitterverse, but shortly after it was sent, the message was deleted by the DIA. An apology was posted within hours on the same official account for the DIA explaining that the tweet was not their position.

It is unclear how many the “Classy as always China” tweet reached initially, but internal e-mails released under a Freedom of Information Act (FOIA) appeal by The Black Vault reveal not only the extreme embarrassment within the agency, but also the immediate effort to address the issue.

One email, from an unknown (redacted) DIA staffer said, “[Redacted], sorry to bother you. We’ve had an unfortunate incident on Twitter. [Redacted] mistakenly released a personal tweet from our official account. It has been removed but it was retweeted a number of times and few folks did a screen capture of the tweet.”  Another email also referenced the immediate deletion, but expressed the concern, “…nothing is ever truly deleted from the Internet.”

What followed was a back and forth between multiple, redacted, DIA staffers and employees crafting a response.  A debate ensued internally whether the apology should be vague, as to not bring more attention to their blunder, or reference it directly so the public did not try to fabricate a new story.  “…it will only be relevant to those that saw the earlier tweet, which was deleted. It could draw extra attention, but it also will be better than letting the Internet make up their own explanation,” said one DIA staffer. A response to that message from an unknown (redacted) employee, which came within three minutes, asked, “Could you address it without repeating it?”

The debate went on through multiple emails, with the biggest struggle being Twitter’s character count limitation and the question of whether they should bring more unwanted attention to the mistake. Ultimately, the DIA tweeted the following:

Earlier today, a tweet regarding a news article was mistakenly posted from this account & does not represent the views of DIA. We apologize.

The next morning, the damage control began. According to an email from another unknown (redacted) DIA employee, “First remedial step is that we will take a very deep breath before resuming any tweets, however innocuous,” it read. “Second step is to review oversight.”

Another message also exposed the perceived rift between President Barack Obama’s White House and the Office of the Secretary of Defense (OSD) that existed at the time. “I’ve exchanged emails with the WH Staff and OSD. Main concern is that this won’t happen again,” said one unknown (redacted) DIA staffer. “Second concern is those who will point to a continuing rift between WH [White House] and OSD [Office of the Secretary of Defense].” The same email, sent to unknown (redacted) recipients the morning after the mistake, stated that the White House did not want to address the issue relating to the mishap.

Although the controversy subsided, and the only real consequence was embarrassment, the situation that unfolded reveals a real threat to the intelligence community.  Social networking, especially Twitter, offers government agencies a very quick and easy way to reach the masses with a message; a warning; or simply information.  But as one of the released emails clearly stated, “…nothing is ever truly deleted from the Internet.” Therefore, when a mistake like this is made and the “post” button is pushed, there is no going back.

Thankfully, in this case, the message was only embarrassing, rather than something else that can be perceived as threatening to another nation.  But what happens if a disgruntled employee or a hacker decides to take control over sending a message on an official social network account?  What would come to pass if the threat of war; placement of harsh sanctions; announcement of impending nuclear attack; or false headlines like the announcement of the death of a world leader were posted on social networks?  Word travels fast, as revealed by these emails, and internally confusion often reigns.

We can only hope that this accidental tweet was not only an embarrassment, but also, a learning experience.