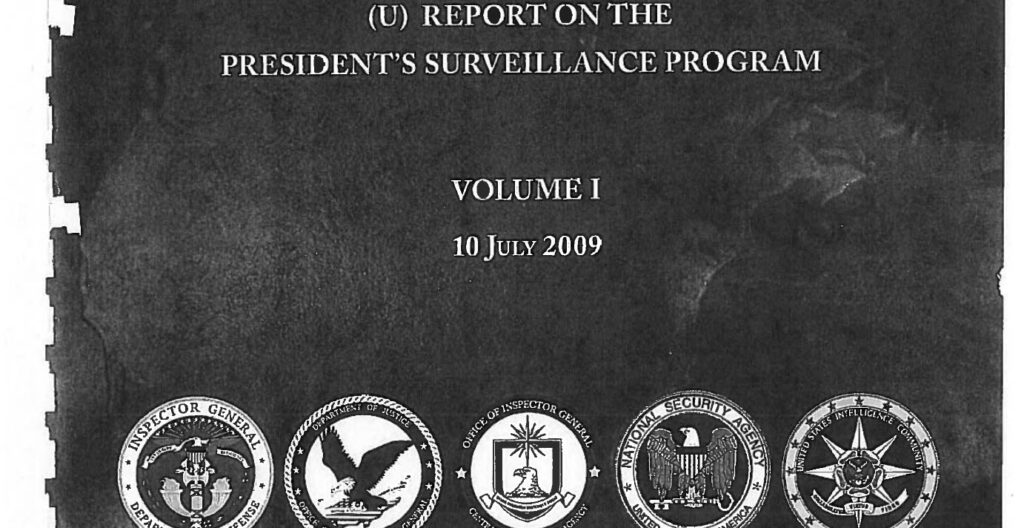 The Black Vault has obtained, and archived, multiple document releases from the Department of Justice and the Director of National Intelligence regarding the action by President George W. Bush, and the authorization of surveillance.

Below, you will find the documents released to date on the topic.

The release today supplements the IC on the Record posting of April 25, 2015, wherein the ODNI posted statutorily mandated, detailed reviews of the PSP by the Inspectors General of five different agencies—DoJ, DoD, NSA, the Central Intelligence Agency, and ODNI—as well as a joint report signed by the IGs of each of these agencies.

Volume III is oddly not available in the press releases by the Director of National Intelligence, though it is referenced and “linked.” However, the “links” are broken.

I have filed a FOIA request for Volume III, and once received, I will add it here.

On December 21, 2013, the Director of National Intelligence declassified the existence of surveillance activities originally authorized by President George W. Bush shortly after the terrorist attacks of September 11, 2001, referred to as the President’s Surveillance Program (PSP).  In furtherance of this declassification, and in response to requests made by the Department of Justice Inspector General to the Department of Justice and the Office of the Director of National Intelligence, as well as in response to requests under the Freedom of Information Act, DoJ, in coordination with ODNI and other elements of the Intelligence Community, is today releasing several partially redacted Inspectors General reports that detail the PSP.  The Inspectors General reports were completed in July 2009.

On October 4, 2001, President Bush issued the first in a series of classified authorizations under the PSP to the Secretary of Defense directing him to employ the capabilities of the Department of Defense, including the National Security Agency, to collect certain foreign intelligence in order to detect and prevent acts of terrorism within the United States.

The PSP authorized the NSA to collect three “baskets” of information:  (1) the contents of certain international communications, an activity which was later referred to as the Terrorist Surveillance Program (TSP); (2) telephony metadata; and (3) internet metadata.  President Bush issued authorizations approximately every 30-60 days.  Although the precise terms changed over time, each presidential authorization required the minimization of information collected concerning American citizens to the extent consistent with the mission of detection and prevention of acts of terrorism within the United States.  NSA also applied additional internal constraints on presidentially authorized activities.

The collection of communications content under the TSP ended in 2007 when the U.S. Government transitioned the program to Foreign Intelligence Surveillance Act  authority.  The internet and telephony metadata components of the PSP were transitioned to FISA authorities in 2004 and 2006, respectively, and the internet metadata component of the program was discontinued in 2011.

The documents released consist of statutorily mandated, detailed reviews of the PSP by the Inspectors General of five different agencies—DoJ, DoD, NSA, the Central Intelligence Agency, and ODNI—as well as a joint report signed by the IGs of each of these agencies.  The reports describe the White House’s initiation of the PSP through presidential authorization; DoJ’s role in analyzing the legality of the PSP; NSA’s implementation of the presidential authorizations through PSP collection, analysis, and reporting processes; CIA’s and FBI’s use of PSP-derived intelligence in their counterterrorism efforts; the ODNI’s support of the program in providing periodic threat assessments; and the Intelligence Community’s assessment of the value of the program in identifying and combating terrorist threats.

The IG reports describe deliberations surrounding the evaluation of the legal basis for certain aspects of the PSP and the transition of the PSP, in stages, from presidential authority to statutory authority under FISA.  The reports describe the utility of the PSP information in counterterrorism investigations, including assessments by a number of senior government officials that the PSP filled gaps in intelligence collection.  The reports also highlight the complexity of evaluating the precise contribution of the PSP to countering specific terrorist threats due to the fact that the PSP was one source among many available analytic and intelligence gathering tools.

The documents released will deepen the historical understanding of the origins of the PSP in the immediate aftermath of the 9/11 attacks, the ensuing need for immediate steps to prevent and detect further attacks, and the transition of the program to FISA authority.  Today’s release is consistent with the efforts of the Department of Justice and the Intelligence Community to provide increased transparency into our surveillance activities.

Yesterday the Director of National Intelligence released additional documents related to the intelligence-gathering activities authorized by President George W. Bush shortly after the attacks of Sept. 11 and subsequently transitioned to authority of the Foreign Intelligence Surveillance Act.

On Dec. 20, 2013, the DNI declassified and acknowledged the presidentially-authorized activities, and his public statement on Dec. 21, 2013, provided the previously classified history of the program, which authorized the National Security Agency to collect: (1) the contents of certain international communications, a program that was later referred to as the Terrorist Surveillance Program, and (2) telephony and Internet non-content information (referred to as “metadata”) in bulk, subject to various conditions.

After President Bush acknowledged the TSP in December 2005, two suits were filed against the United States and U.S. government officials challenging alleged NSA activities authorized by President Bush after 9/11. Those suits are still pending in the Northern District of California. In response, the U.S. government, through classified and unclassified declarations by the DNI and NSA, asserted the state secrets privilege and the DNI’s authority under the National Security Act of 1947, as amended, to protect intelligence sources and methods. Following the unauthorized and unlawful release of classified information about the Section 215 and Section 702 programs in June 2013, the court directed the U.S. government to explain the impact of declassification decisions since June 2013 on the national security issues in the case, as reflected in the U.S. government’s state secrets privilege assertion. The court also ordered the U.S. government to review for declassification prior classified state secrets privilege and intelligence sources and methods declarations in the litigation, and to file redacted, unclassified versions of those documents with the court.

On Dec. 20, 2013, the DNI declassified and publicly released eight previously classified DNI and NSA declarations that were filed in support of the U.S. government’s prior assertions of the state secrets privilege and sources and methods privilege in the above-mentioned litigation. Yesterday the DNI released an additional 10 previously classified DNI, NSA, and attorney general declarations, which are posted on the Office of the Director of National Intelligence website and ICOntheRecord.tumblr.com, the public website dedicated to fostering greater public visibility into the intelligence activities of the U.S. government. Some information has been redacted from the declarations to protect information that remains properly classified for national security reasons and because of the great harm to national security if disclosed.