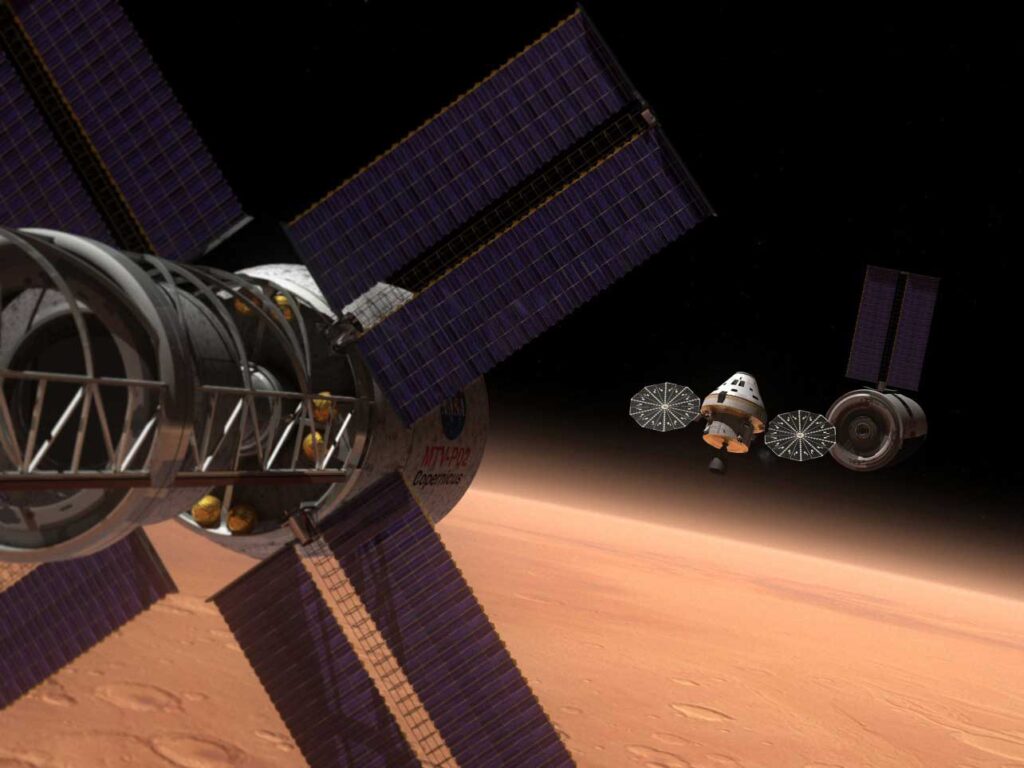 This category archives documents relating to advanced propulsion systems and related information on Deep Space travel, along with other reports on Deep Space Communication.

Outer Space Propulsion by Nuclear Energy, January/February 1958 [ 239 Pages, 17.5MB ] – The Joint Committee on Atomic Energy has for a number of years concerned itself with the development of nuclear propulsion for a variety of peacetime and military uses. Perhaps the most outstanding example of nuclear propulsion in action is the Nautilus and its counterparts in the underseas fleet of the United States Navy. This document is the: SUBCOMMITTEES OF THE JOINT COMMITTEE ON ATOMIC ENERGY CONGRESS OF THE UNITED STATES EIGHTY-FIFTH CONGRESS SECOND SESSION ON OUTER SPACE PROPULSION BY NUCLEAR ENERGY.

Twenty-First Century Space Propulsion Study, October 1990 [ 76 Pages, 4.46MB ] – The contract objective was to monitor the research at the forefront of physics and engineering to discover new space propulsion concepts. The major topics covered were antiproton annihilation propulsion, solar sails, space tethers, microspacecraft, and unconventional propulsion concepts. Nine papers were published on : (1) using light pressure to levitate a communication satellite poleward from its position on the equatorial geosynchronous orbit; (2) a ‘polesitter’ spacecraft that uses light pressure to hover over the polar regions of the earth; (3) a complete analysis of all the forces on a non-ideal ‘grey’ solar sail; (4) a new solar sail design with better performance than a standard solar sail; (5) a new tether transportation system called the ‘cable catapult’; (6) a thorough analysis of propulsion using negative matter; (7) a review of space warps; and (8,9) two reviews of advanced space propulsion. Also published were issues 8 through 18 of the Mirror Matter newsletter on the science and technology of stored antimatter. Five other reports are included as appendices.

Twenty-First Century Space Propulsion Study Addendum, June 1991 [ 40 Pages, 2.28MB ] – This addendum to the final report on the contract (AL-TR-90-030, 21st Century Space Propulsion Study, (Oct 1990, ADA229279) evaluates a number of new space propulsion and sensor concepts. The major topics covered were coherent neutrino scattering and its application to neutrino sensors, the use of tethers for power and propulsion in space, the application of high pressure, high energy density materials, specifically metallic hydrogen, to divert velocity thrusters, and the use of solar sails to provide a non-orbiting space platform for surveillance and space-to-surface missiles. Two technical papers, included as appendices, are entitled: Surgical strikes from space using solar sail satellites; The Weber effect experiments.

Design and Stress Analysis of Extraterrestrial Electric Rocket Engines, 1970 [ 670 Pages, 29.67MB ] – Given are general data on the design of electric rocket engines calculation of their strength and vibrations, evaluation of their reliability. Considerable attention is given to power generators of cosmic engine installations. Analyzed are structural diagrams of nuclear reactors, isotopic power supply sources, solar concentrators and chemical fuel elements. Given are methods for calculation of strength of various generator parts; housings, casings, and walls, perforated plates under load. Discussed is the calculation of temperature stresses in heat-releasing reactor elements.

Controlled Fusion for Space Propulsion, April 1963 [ 24 Pages, 1.1MB ] – Since controlled fusion will probably be achieved in the near future, the feasibility of applying it to the propulsion of space vehicles was studied. Some qualitative arguments are given to support the technical feasibility of this application. Problem areas that require solution prior to the establishment of design philosophy are also discussed. Because of the potential of a fusion-propelled space vehicle for the accomplishment of very high energy missions, a preliminary research program for investigating the feasibility of fusion energy for propulsion is deemed justified.